I picked up PunkApocalyptic-the-rpg (link) and one of the released adventures involves a location called the Lower Septic. Here is what the rulebooks says about Septic Tank:

SEPTIC TANK
A foul odor hangs over the greenish waters surrounding the city of Septic Tank. Divided into two areas, Upper and Lower, the people here make their living by trawling the foul waters for megatroutasses. Fisherfolk and outcasts live in Lower Septic Tank, a cluster of huts connected by floating platforms and crawling with leechcrabs—mean mollusks that feed on blood. Better living can be found in Upper Septic Tank, which has been built atop the ruins of an old bridge. Here, the rulers of Septic Tank avoid the filth and squalor of the lower city, while issuing edicts that make life for the poor who live beneath them wretched and torturous.

Septic Tank is divided into a lower (poor fisherfolk) and an Upper (wealthier people that live off the labors of those below). Lower Septic is a neighborhood of the poorest people of unfortunates who live floating on a sweltering, steaming, pond of waste, refuse, and unknown chemicals. They spend their lives sifting through the swirling muck to scavenge whatever they can find and fishing for the scrumptious megatroutasses those living above them will pay a high price for.

Lower Septic is truly a horrible place to visit and frankly, just the kind of place I want to take my players. Sounds like loads of fun. I took a little liberty with the place and opened it up a little, I want it to be sprawling and a good spot for a spread out fight or even chase. 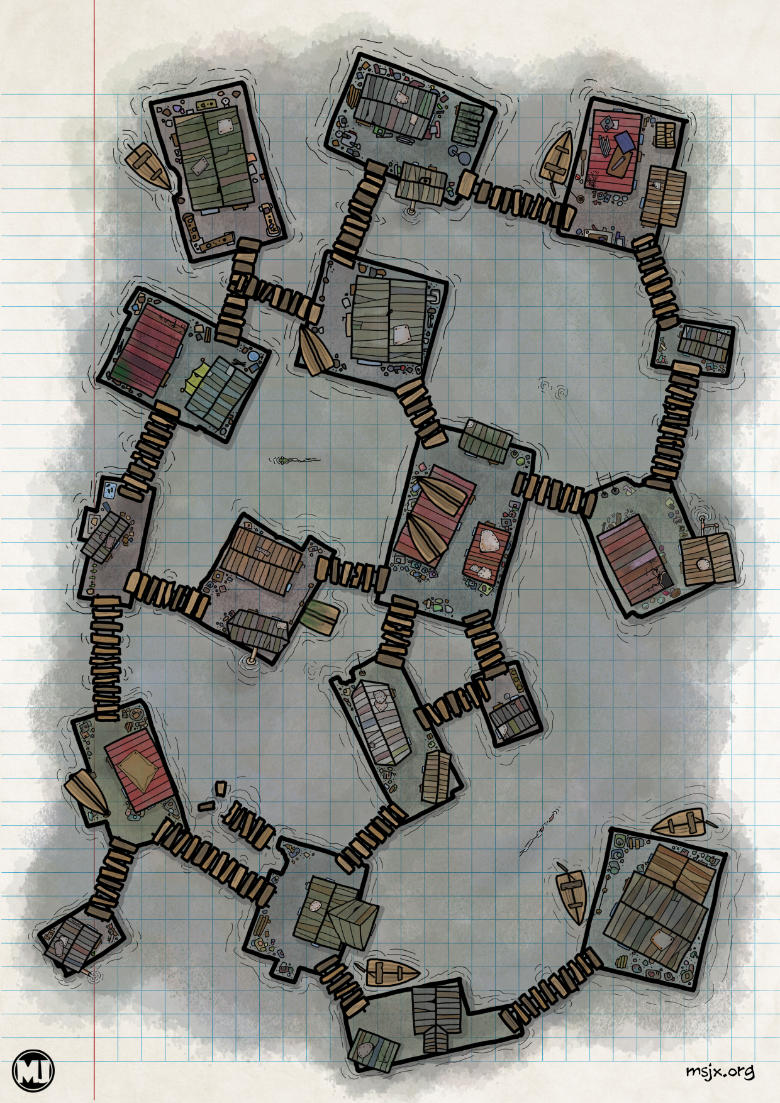 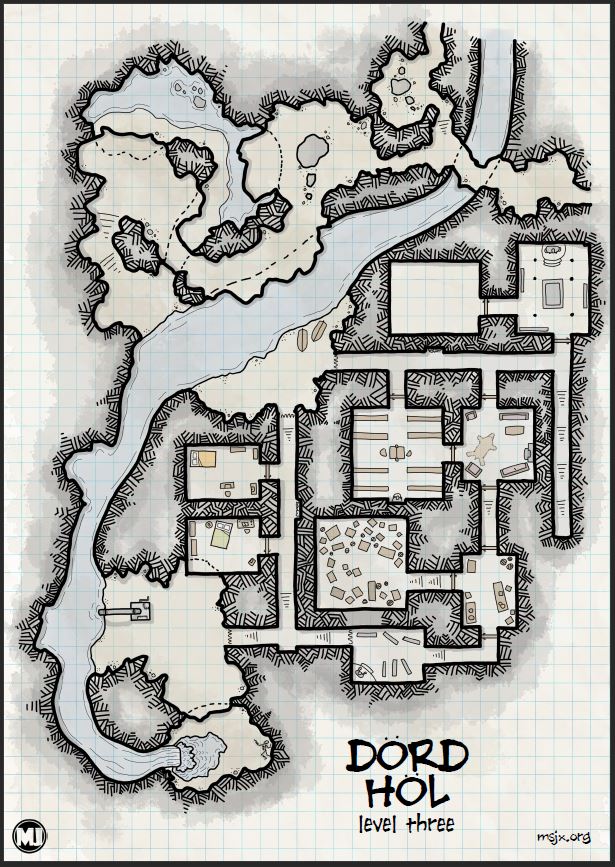 The second level of Dördhöl, sitting just above the first level and accessible via a stairwell. Or, for those enterprising explorers who looked up in the chamber with the spring, one could also climb up to the second level and enter through two different balconies.

Patrons back at the Tub 'n Muck pub tell tales of horrible moaning coming from the balconies, but no one has stated they had the balls to climb up to check it out. Well, except for Liw Dlorna, he claims to have climbed up to a balcony with a brave band of fools. Alas, all but he failed to return and now he has become a legend in his own mind with the tales to match....but you know what they say about tall tales in the pub. Anyone spending a solid thirty minutes to listen to Liw's ramblings and dropping about 10gp on brews can make a INT check to try to decipher his drunk tales. Roll a d6 for every ten minutes they listen to Liw past the initial thirty.

Drunk Liw's ramblin's:
1 - There be dead people a wanderin' around the halls! If ye be quiet and can maneuver sans light sticks, you can pass by without pissin' 'em off.
2 - Old Queen Mariand Atoka is dead, trapped in a pit in one of the rooms. But let me tell ya, the bitch can climb!
3 - A secret chamber holds the Lost King's treasure, 'nough to need ten mules to haul!
4 - The benches on the balcony are soothin', careful or ye will fall fast asleep....easy prey for those dead fuckers! Course, the healin' that occurs while sleeping.....and the dreams! Weeee!
5 - The Lost King's son still plies the halls from his secret chamber. He's a tough one, not easily fooled, least ye a looker in the band. If ye catch me drift.
6 - The statues, hell, they ain't a happy bunch, leave a coin at their feet to pass safely by. Ferget this at yer peril! 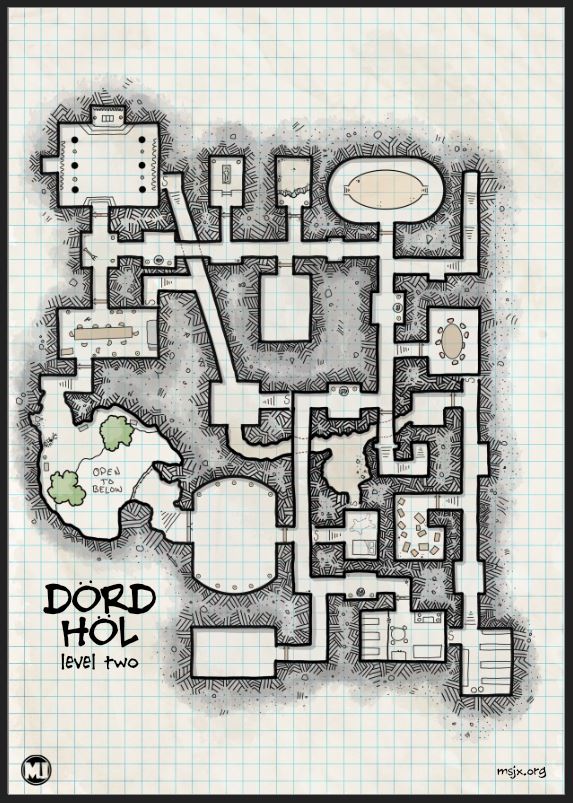 A little bit of a delay in getting this one out the door, been pretty busy with work and all. Plus I started work on the mega-delve I am calling Dördhöl, which by the way was attacked on Reddit for incorrect umlaut usage, but hey, whatever floats your boat (just keep your weird ass boat out of my pond).

Anywho, here you go, QA05. I thought it might be fun to add an acid bath into a dungeon.

[UPDATE] Vance took my map and suggestions and made a kick ass adventure out of it!
https://leicestersramble.blogspot.com/2020/05/come-on-in-acids-fine.html

So here goes my pitch:
The Cult of Makris operates this temple hidden up in the crags and gorges. Makris is an underworld demon worshiped as a god by these silly fools, Makris also holds domain over the realm of the dead who were lost and never found. Those who are lost and never found are assumed to wander the domain forever in servitude to Makris. As a result the cult likes to abduct people, creatures, monsters, etc and sacrifice them to Makris. Thus, the acid bath.

The temple consists of a large temple with a huge 40' statue to Makris in all his muscular and winged greatness. The eyes are solid rubies the size of a human fist and worth an assload of gold. A large chamber is filled with cages that hold the upcoming sacrifices. A huge pool of acid with a long platform that reaches out over the pit serves as the alter for sacrifice. The left most portions below serve as the holy bathing chamber for the two priests that maintain this temple (Adso of Melk & Brother Maynard). A third priest (Father Brennan) used to work the temple, but something has happened to him and the others have secured him in his chamber until they can either cure him or safely remove him by other means.

Getting your players to the temple:
o Perhaps one of the friends/family has gone missing and rumors point to this temple that likes to abduct people.
o A pair of priests approach the band with requests to help them solve a problem with a third monk that lives in their temple.
o The Piss Off Joe method. Have the PCs be captured, stripped of weapons and magic and put them in a cage. Sit back and laugh at their futile attempts to free themselves.
o The temple has gold, right?

Prisoners waiting for their bath:
1 - Wilbub - a talking goat with a pure white coat. He can only say the words "Nip" and "Glrot". He will occasionally hum a tune that sounds familiar but you just cannot place it.
2 - Toric - a young farmer abducted from a nearby village as he worked the fields. He has a young wife and newborn child to care for. He has a necklace that belonged to his mother around his neck worth 40gp.
3 - Mit Strots - a old and wise kobold, still dressed in the sacred robes of his people. He was carrying his tribes latest sacrifice (a bag with gold coins and jewelry worth around 250gp) and a flash of holy blood when he was struck from behind and then woke up here. He is currently wailing about missing his love, another kobold named Yvi.
4 - Ecnav Reicalg - An elderly woman dressed in the style of high fashion, with nails perfectly manicured. Also in her cell are two men dressed in similar fashion, her servants. She is seen to be rather rude, constantly beating them with cruel words, and berating them "for letting her be abducted by these maniacs!" She has over 500gp in gold, gems and jewels in her purse and though she will offer the prize to help her escape, she will go back on the offer once free. She's basically an old naggy rich bitch.
5 - Hcemid Eoj - a large minotaur that has seen better days. He's a bit overweight, his right leg is bandaged, one black eye, and his right horn has been snapped off with about 2/3rds missing. Last he remembers he was on a bender back at SteveO's Pub, throwing back quite a few, canoodling with the cute elven babes who kept mumbling something about their master Makris and how much blow he has back at the ranch. He's currently suffering from a massive hangover and a weird rash that showed up about a week ago (after the incident and unrelated to the elven babes).
6 - Twenty-seven small, wingless fairies - these poor lads and lasses were captured after a rather fun night at a fairy rave. Hopped up on drink and fairy dust and incapacitated, they were captured and had their wings clipped by the priests. They are in various states of undress, suffering hangovers, and are basically feeling desperate and completely shitty. Nyarb Swodaem seems to be the only one of sound mind and working out a plan to get out of here. 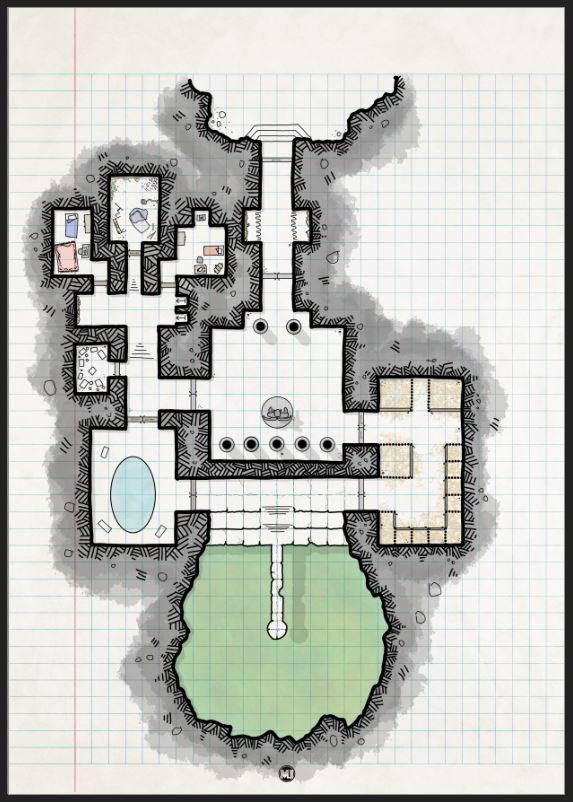