Scott Kirby, a fine fellow over on the NoteQuest FB group converted the Notequest character sheet from its native Portuguese but he properly put it on paper sized for the rest of the world, not us silly blokes in the US. So with his permission, I converted it to a US letter sized page.

Enjoy, now get in that dungeon and get to clearing it! 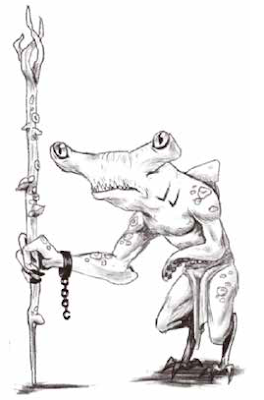 One of the things I felt could use a house rule in Notequest is the Looting. Not that as written it is badwrong, but that I feel unsuccessful (unfulfilled?) when I kill monsters and find no coin or treasure. Go ahead and call me a millennial but I feel like I need more reward than just not dying.  ;-)

So, I came up with a quick Alternate Loot Table:

When you slay creatures that lack the Loot characteristic, roll a d6 and consult the table below:
1-2  Coins equal to the roll
3-5  A healing salve, heals 1 Hit Point when applied (takes an Action to apply)
6     A single Torch

I feel like this table will add some excitement to the slaying of all the creatures but will not cause the game to become out of balance and the characters suddenly become too powerful. 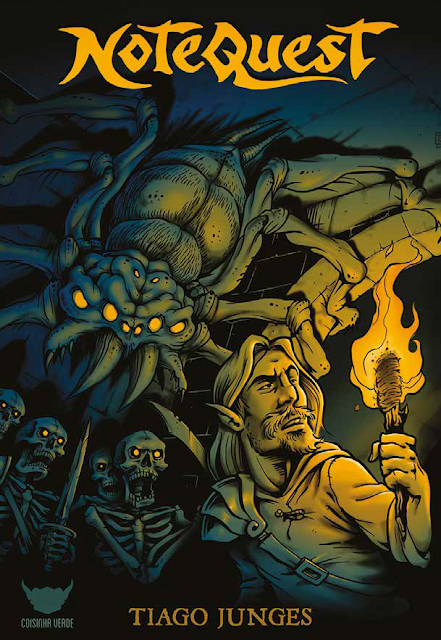 If you read this blog you likely know that I have been messing around with solo games and trying multiple ones that I come across. I recently saw this one on the Solo Reddit page (a shockingly ok place actually). I've had this for about a week and simply been too busy to play. This morning I finally had a chance to try it out and I want to say I enjoyed this quite a bit! Link to purchase game.
While having a little breakfast I quickly made a character, a task that takes exactly two rolls and then began creating the dungeon I was going to explore, three more rolls. Grindor the dwarven guard was ready to plunge the depths of The Prison of the Dying Vow!  ;-)

I have read from other that have played that the game was deadly and I did have many close calls but honestly if you approach this from an OSR viewpoint, you CAN survive. Do not try to push the risks. Do not try just one more door. GTFO and rest, heal, and regroup.
Grindor came close to dying a few times but I was able to enter the prison twice, each time returning with just enough coin to rest, heal, and resupply. I watched a handful of videos on YouTube (see Lone Adventurer's videos and the excellent videos from Ithaquas Bane) and learned the basics, along with some thoughts on some rule clarifications. Using this knowledge and, honestly, my OSR mindset of not forcing every battle and knowing when to run, I left the dungeon multiple times. I had a couple of short trips to the dungeon which helped me gather a few extra coins and eventually a magic weapon. The fact that you have to reroll on the Monster Table when you go back but not the Open a Door table means there is less risk to sudden death but a better chance of Loot (see next paragraph), means you run less risk of dying while increasing resources. These short trips allowed me to gather enough coin to enter the dungeon with the idea of going down to the next level. I was able to get a magic weapon as well as a scroll with a pretty powerful spell that allowed me essentially two free attacks (entering the room through an unlocked door then the spell taking away the attack) and my magic weapon allowed me to quickly neutralize the boss monster, a medusa.
Edit, in answer to Steve's question below.

The rules state that is you leave, 'you will have to roll on the Monster Table for each empty room you enter'. Thus, when I returned I did not roll on the Opening a Door table but I rolled on the Monster Table for each room I entered when I returned. I did NOT roll on the Room Content table as I had already cleared the room. The Loot I gained was only for the monsters I defeated. I was very lucky in my return visits, rolling either the Orc Leader, 2 Orcs, or the Fungoids, each that come with Loot when slain.
Looking at the rules, and taking them verbatim, I did not roll for monsters when I entered an empty room while leaving the dungeon, only upon returning. If you look closely on my map below, you can see I went back to room 5, 6, and 3 (which line up with the encounters on the left...marking each subsequent encounter (9,10, 12, and 11, I entered room 1 but found it empty so I continued to 3).
One house rule that Lone Adventurer mentioned he made in error (I did as well) was that damage rolls over to enemies. If you are fighting two goblins with 3 hit points and you do 5 damage, you kill one and the extra damage rolls over to a second goblin. This makes battles between your one character and groups of monsters a little more survivable. Sure sure, some will say that is cheating, but the game is still deadly.
I have only two improvements I would suggest. One, I would be to make the Reward Table a 2d6 instead of a d6. The shortness means if you return to the dungeon multiple times like I did, you tend to get repeats frequently, but that could just be a side effect due to my style of play.
The other improvement I would suggest is, well, I think a self-inflicted issue. In many of the fights you encounter you will find nothing. Many of the rooms are essentially empty, full of coffins but lacking any sort of reward. This meant winning a fight or clearing a room had no reward, and felt 'pointless'. I think this is simply a holdover from playing D&D for so many years. In D&D you get treasure, get XPs....get something for defeating monsters, so to get nothing made it felt empty. I have another house rule for this I am working on and will post it later.
Final thoughts. Overall, I thoroughly enjoyed playing this and will run a few more sessions. A couple thoughts on the game:
o Torches are the true economy of the game, use them, then leave the dungeon and resupply!
o Use torches smartly, use them to remove the chance of traps (one trap can kill you instantly)
o If you do not break the door down or not set off traps, peek into the room so you can make an informed decision and have a chance to run instead of walking into a deathtrap. Heal & resupply, then come back to the room!
Grindor's character sheet (you can find these in the Notequest FB page) 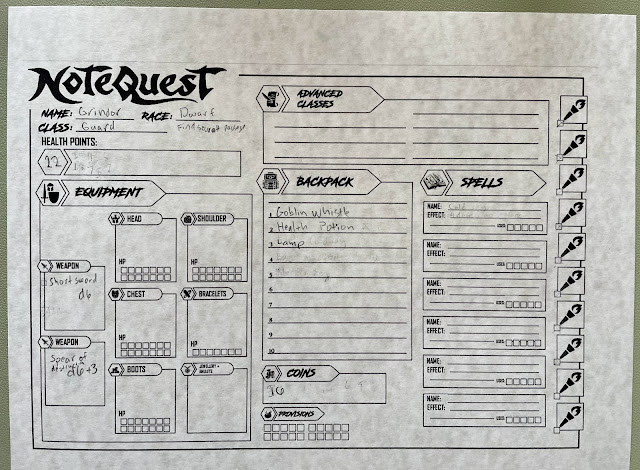 And the playsheet of The Prison of the Dying Vow. Map in the center, a quick 'key' on the right for room sizes, and a record of the battles on the left. I actually goofed at the end when instead of immediately encountering the Boss Monster upon coming down the third set of stairs, I immediately rolled a 4th set of stairs! Releasing there was nothing in the rules about this, I quickly backed up and went to the boss fight. 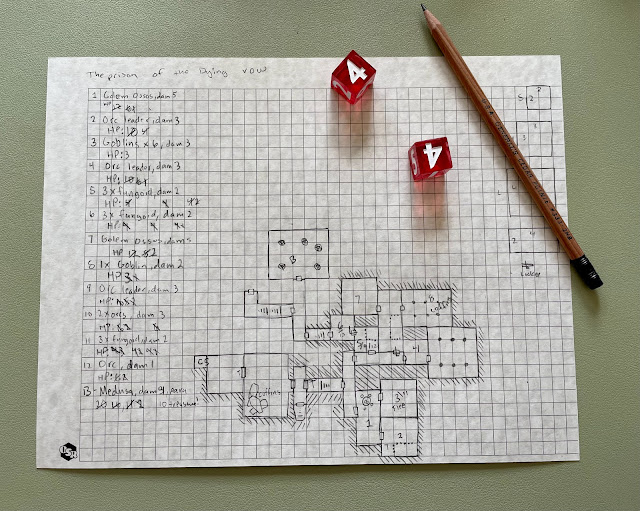 A map - by that other cartographer 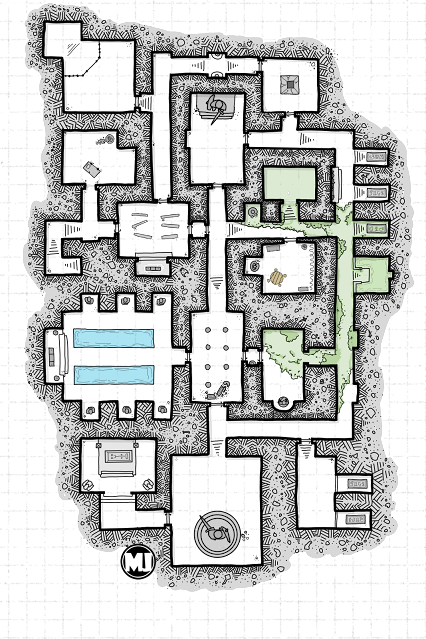 Those of you in the know, know.
Download the pdf here. Sexy half-page with lines for writing adventures.
2 comments: