The Bullet Journal - How I use mine 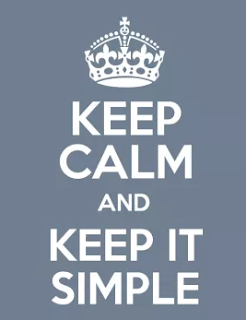 Using the Bullet Journal has changed my life and kept me on top of tasks that were at one time overwhelming.

I had been trying various digital apps on my phone in an attempt to get a grasp on everything. My occupation is critical to a military unit's ability to operate and be successful at its mission. Everything goes through my office that deals with budget, maintenance, procuring new equipment, repairing old equipment, fielding equipment, investigating the loss of equipment, etc etc. We oversee the handling of $47 million in equipment and an annual budget of around $2.5mil. There are four of us that know what we are doing and attempting handle this deluge of information and activity. Last year half of the team deployed and that left just two of us to handle everything. Needless to say, I found myself swimming in very deep water and struggling hourly to simply keep my head above the water line.

About nine months ago I discovered the Bullet Journal, or BuJo. If you know nothing about it, please go here first:
http://bulletjournal.com/

Beginning to use the BuJo.
I began using the Bullet Journal system and after struggling initially, I have now turned on about fifteen people in my unit and a few of the doctors I see onto the system. At first I attempted to use it exactly as the site explained. Then I made the mistake of wandering into the bottomless pit of Pinterest and fell in love with the millions of ideas of 'How to make it better!' and "See my sexy journal!" pictures that dominate the journaling pages.

There are a bajillion ideas on how to journal. Ignore them.

Let me repeat that. Ignore them.

Start with the basic BuJo system explained on the site http://bulletjournal.com/ and go from there. Try it for a week, just like Ryder Carroll explains. At the end of the week sit down with your journal and consider what worked for you and what did not. THEN try tweaking it.

I found much of the 'set up' was a waste of time for me. I rarely used some of it. So I cut it out. Keeping these things in was a time killer for me. Time is something I have little of.

The first thing to go was the Index.

Bye bye Index.
The index, I just do not use it. Most of my tasks are of the "OMG This MUST be done NOW!" sort and I rarely have to return to them. If I do, they are often recent tasks that reoccur within in a week or month. The index is over kill for me and the time wasted I could better spend elsewhere. In your own life you could very well have a reason to revisit tasks.

Sticking to the BuJo system...or not.
The next thing I learned was use the symbols that make sense to you, are not complicated/detailed, and are easy to draw. At the time I started I did not have a squared journal - that is the official term for Moleskine journals with grid paper. I had a lined journal and drawing perfect little squares or circles the same size was a challenge. I'm somewhat of a perfectionist and I found myself agonizing over how crappy my journal looked compared to those on Pinterest (see the section above where I said ignore them, I was not joking). Later I realized that I needed the squared journal and I went and got one. I already have two more waiting for when they are called to the front line for action.

I played around and realized the symbols that I could easily draw - a square, dot, and a triangle. A child could draw them. Simple, quick, effective. You would not believe how many weeks it took me to arrive here. I use just three. 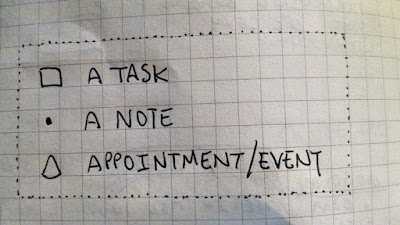 Armed with just these three Task Identifiers (as I call them), my BuJo really began to work. Over the months since I have tweaked my symbols here and there but I always come back to the core three above, always finding that old saying really does work KISS - Keep It Simple Stupid.

I added new signifiers (those things to the left of the task squares), these I discovered often added a layer of complexity that was pointless, so I dropped most of them. If you check Pinterest (I know you did, it is ok) you will see tons of neat, cool looking signifiers people have come up with. Many take too long to draw, are too complex to be reproduced easily and quickly, and end up cluttering the page.

That said I have narrowed my useful signifiers to just three: Important or Hot! items, thing I need to look into or research at a later time, and school related tasks. I find the look up items tend to be cool things people point out on Google+ that I want to remember to look into later, usually at home after the work day is over. Below are my signifiers. YMMV 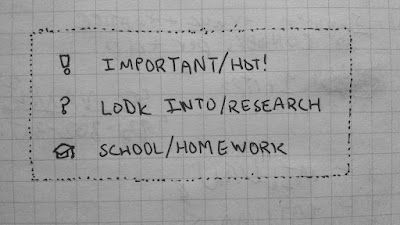 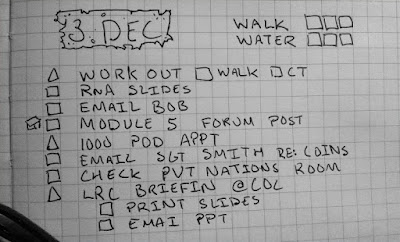 You will notice I have added a small tracker at the top. I am under orders from the doctor to no longer run so I walk, each block stands for 5,000 steps, my goal is at least 10k a day, but I would like to build up to 15k. I am attempting to watch my weight and part of that is drinking more water, filling that tummy with zero calorie water so I do not fill it with a Snickers bar or M&Ms. I picked up a 32oz Nalgene bottle that I refill, each full bottle drank is a square. I aim for three of those a day.

Next are the tasks I start the day with. Some of these have important sub-tasks I need to remember to complete BEFORE the main task can be accomplished, so I have added sub-tasks indented below the main task as in the "LR Brief @COC" seen above.

Sometimes I want to note how a task was done, as in the "Workout" task at the top of the list. Did I walk or do circuit training (the CT)? This is not really important but I like to recall at the end of the week how often I did each as I (hopefully) start to get in better shape after breaking my foot twice this year.

Planning and closure.
I tend to do my planning and closure at the same time. Before I head home at the end of the day I review my task list. Anything that I did not complete is migrated to the next day. I review the tasks I have completed and make note of any new task that resulted because of these tasks.

I spend about five minutes, really, that is it, using this process. During this time I close out tasks that I forgot to mark complete during the day, migrate ones that did not, basically build tomorrow and end up with something that looks like that above for tomorrow(see the typical day above).

Future Logging.
Alastair Johnston came up with a great system to quickly note events or tasks that will happen some time in the future. You can see the details here on his page: http://alastairjohnston.co.uk/cracking-the-bullet-journal-forward-planning-problem/ This is something I am just beginning to experiment with. I think it will be useful as I have found other systems too heavy handed and a time sink to use on a regular basis. 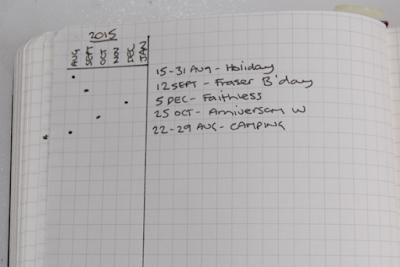 (Hopefully not) Final thoughts.
One major side effect of this process is that I am retaining details and tasks so much better. I suffer some memory loss from my time in the Army and the stress of my job only makes this memory issue worse. Studies have shown that writing with a pen, you know the old fashioned way, registers the information much better in our brains than those fancy digital tools people these days are fond of utilizing.

I can verify this 100%. Since starting the my BuJo I have been able to recall information much easier, longer, and I seem to be able to intelligently think on that information. Somehow it seems to have kickstarted my brain a little.

Another major side effect is stress reduction. This could be based on a multitude of factors but I like to think the structure of the BuJo and task organization in general have given me some clarity of thought, an expectation of what is to come or expected of me in the coming day, and some closure at the end of the day. Seeing a full page of tasks that I have completed (yeah, a full page does happen), gives you some sense of satisfaction, that you are getting somewhere, moving forward, etc.

I am quite proud of my BuJo and I DO take some time here and there and embellish it with some designs here and there but I do not go overboard. This is a thing of work and purpose for me. I like it neat and organized. I do not want it to be too distracting, flashy, or busy.

Have you started your own BuJo? How has it been working for you?