Before our session Thursday, I wanted to update the players on a few rules updates (inclusions really) that I had not previously been to stringent on. Here I will gab about them for no other reason than this is my blog. ;)

Movement (and therefore encumbrance). I recently listened to a play report that included a dungeon battle in 5 foot wide tunnels. During the battle, the width of tunnels and the movement of characters came into play in a big way. Marching order in a 5 foot wide tunnel, where it would be very difficult to squeeze past the leader to fight the bad guys, it very important. I realized I had been very loosey-goosey with this and allowed the players far too much leeway in moving around in combat. This brought up two distinct points we needed to discuss:

1) Encumbrance. I had not really been tracking this at all, relying on the players (and me) to keep an eye on reality or carrying an asston of stuff. I have decided we will be using the Basic Encumbrance rules from OSE. Essentially I will limit movement to the armor worn listing as the group enters a dungeon/adventure, once they start carrying stuff, we will take a closer look at things. As the change between with-treasure and without-treasure is quite different especially for those in heavy armor I expect to have a direct effect on play. So movement will be based on the Option 1 rule for encumbrance below: 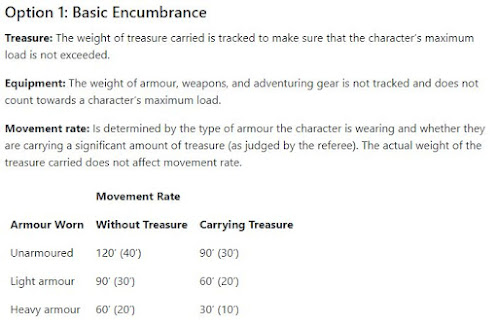 2) Movement. I never really focused on this in combat, and many times this will still not really come into play. Combat tends to be close and fast with characters only having to move slightly but in listening to that actual play I realized the I have been too loosey-goosey on movement as well. Moving forward I plan on being much more strict on movement and actions. Players will have two options:

The reason this is important is that it could have a major impact on situations where movement is limited. In the image below Olwen is facing off against a mounted rat and two giant rats. Brad and Usse are nearby and want to help. Last session the team loaded up their friend Brad with plate mail, a shield and sword, so his movement is 20' for combat, that is four squares given the 5' squares in the map. Usse though is a much more lean warrior, carrying only a pair of daggers.

If Brad's player moved him his full move, he would be positioned here (image below), and I would likely allow him to attack the diagonally connected square with the giant rat. However, now Brad is blocking the hall because squeezing past a character engaged in combat in a 5 foot wide tunnel is difficult. So, because Brad is weighted down and armored up and this impacts the faster, less armored party members. 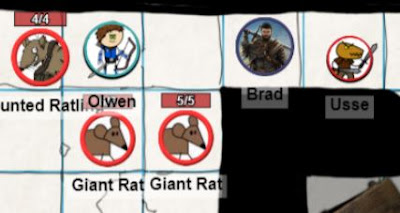 Brad might have chosen to double his move so he could get into the next square, though he would not have been able to make an attack at that time. Life's about choices.
I am hoping this leads to some interesting situations where the players' decisions on equipment, placement of the characters in the marching order, etc end of having tactical implications on the game.
3) Initiative. Previously, and use ease of use, I had simply had each side roll once and do a group, all or nothing initiative. Last night I switched to one roll for baddies and then individual for the players. I will likely stick with this as I feel it is easy to track in combat (if I somehow get ten players maybe I will rethink this). When fighting either two distinct groups of baddies, or we have an encounter with minions and a BigBoss baddie, I will probably roll separate initiatives for the baddies. Players can add any benefits from race/class/abilities to their initiative roll.