SESSION, THE SEVENTH
With this session I had decided I wanted to expand the play area a little. I have been thoroughly enjoy GoCC but I wanted to give the players a little more opportunity to explore the area and what it has to offer, options for things to do, etc. For one, I felt like the area around Kalynn is ripe for exploration that we have yet to even dip our toes into. So, Thursday afternoon, during a late lunch, I devised a plan....

We all knew Joe was going to be doing some serious shopping now that they had gold, and he was already roaring to go when we all logged into the Google Meet. Luckily, we went through that quickly, got Tim's new character a token, and I went over a few things I wanted to make note of before the game started (the previously posted discussion about movement and encumbrance).

We began in town and the characters noticed a sort of ruckus going down at Pepsy's Pub n Inn. It seemed some adventurers had returned with a large horde of gold and treasure. The group hustled their way into the crowd - there is only standing room inside -  and discover it is actually a group of dwarven miners. The miners had been up in the Mourning Mountains when one of their party broke his arm. Unable to continue mining, they opted to head back later than usual, to Kalynn. As night fell, so did a thick fog and they decided to camp.

Early in the morning they were startled by the living dead moaning as they stumbled into their camp, reaching out with their dead claws! Scared and fearing for their lives, they high-tailed it out of there in the early morning hours with the sun still sleeping and a thick fog still blocking their view. In their anxious flee, they managed to enter the Midgemarsh.

The Midgemarsh is a feared place. A miserable swampy mess filled with biting insects that makes all living things life suck. Ages ago, the river to the east called the Barrow River flooded it's banks, as it did, the river flooded the barrows that were hidden there and flushed their contents into the Midgemarsh. Consequently, the inhabitants of said barrows were not happy. They began to wander. Additionally, the Barrows River Valley was not the only place with barrows. The Midgemarsh (which used to be a lovely plain filled with rolling hills) was full of it's own barrows! Needless to say, now you have unhappy undead, mad their homes were disturbed, wandering (and sometimes fighting with) the original inhabitants of the Midgemarsh, more undead!

Anyhoo, the new thief in the group, Raymono attempted to swindle the treasure from the dwarves. Posing as a royal inspector of some sort. His reaction rolls, as expected (it IS Tim after all), go poorly and the one non-drunk dwarf is not fooled. Further attempts are cur short by the local lord, a few of his muscle, the town reeve (a fat, no good ahole), and the local Irnoch priestess named Sister Íde show up.  Lord Rothrod (I renamed him from Lord Ross in David's book as Ross is my father's name and felt too close to home) asked for the crown and believed it belongs to an ancient civilization that used to live in these parts. Sister Íde studied the crown and determined that it needed to be sent to the Grand Temple of the Divine in Sunderia for further study. With that she departed and Lord Rothrod waved his men off. Once allow, and as if not wanting his men to know he has a heart, he offered the dwarves a bag of gold coins for their now-lost crown.

After things settled down and the lord left, the party began questioning the dwarves, determining that the horde was found in a barrow the dwarves fell into, killed a skeleton, and escaped. The two dwarves, Morgart Rockaxe (broke leg) and Findorn Farseerer (broken arm) would be laid up for at least a few weeks. The party convinced Dimgert Flathammer to serve as a guide....

The next morning, the group headed off, led by Dimgert. An hour or so into the marsh, they heard some splashing nearby. They discovered a skeleton chained to a downed tree. Olwen immediately goes to town on it's skull and ended its miserable 'life'. 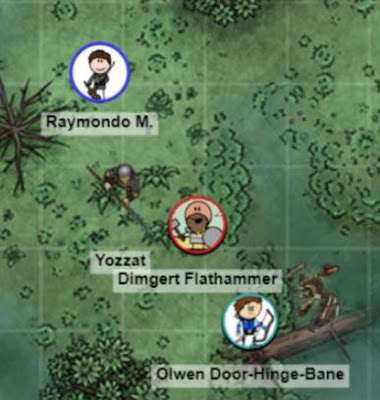 Rather quickly, they discovered a rotting body floating in the water nearby, Olwen started to search the body...but then Joe remembered Rotgrubs and decided not to search. The noise attracted another group of skelies who attacked the group. Suddenly, the rotting body sprang to life! The battle was fierce but luckily, this time, all party members survived!.
They party continued until Dimgert lead them to the opening. Yozzat was lowered down into the hole and searched for about twenty minutes to find a secret compartment with additional gold within. Beyond that, it appeared all had been discovered. While he searched below, Olwen searched above. 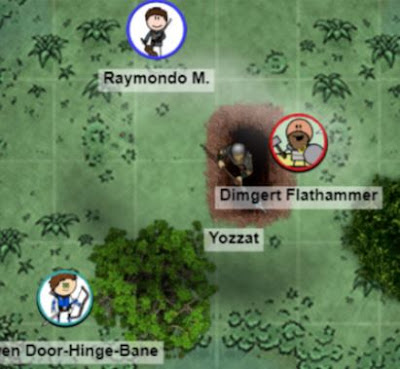 And before long, he found what he came here for....more barrowmounds! 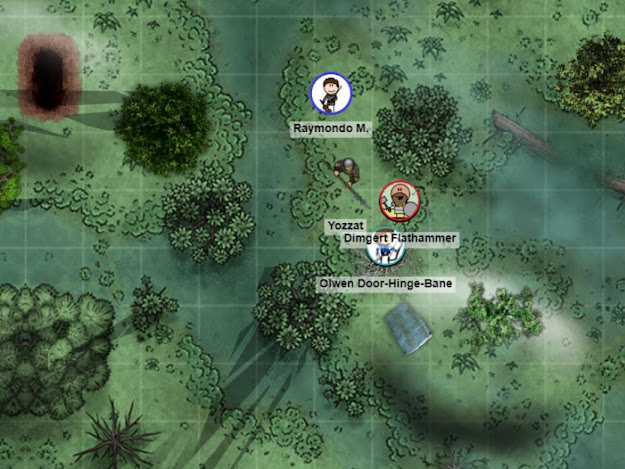 Maps wiped from https://www.patreon.com/afternoonmaps (I know, blasphemy that I am not using my own map, oh well)

HIRED HELP
Bint (kobold) who they oddly forgot about this adventure!!
Usee (kobol) likewise forgotten
About ten kobolds who died to avenge their people!
Garth the human (dead)
Izzy the elf (dead)
Too many retainers to count and I cannot recall their names