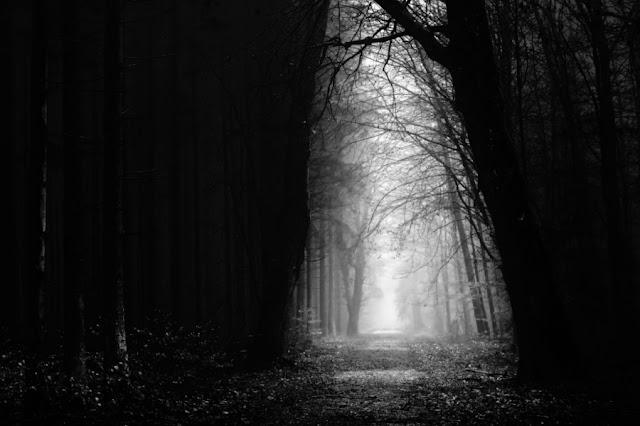 Tristan bent down, untying his pack, his feet sore from the long trek on the trail. Kip sat on a fallen tree nearby, munching on nuts and berries of his trail rations, easing his grumbling stomach. His back hurt from carrying his heavy pack and he arched, stretching his back and reaching upwards to the boughs of the trees. Above him, the branches stirred.

"Tris!" He shouted as the large form fell on Tristan...

After their tough battle against the wererat and his pals. I decided Tris & Kip needed to rest a little and recoup from the strenuous and deadly battle. As per the rules, Kip's maximum travel rate through along a forested trail is nine miles, less than Tristan's 12. Using the six mile hex this means we can cover 1.5 hexes per day. After a short break to rest and eat, the pair decide to move along the trail.

Not wanting to use a complicated system for random encounters, I threw together a quick method for determining what might be encountered if I roll that they encounter something. I have decided I would rather us oracles than set encounter tables all the time. I prefer the simple method of a d6, just has that old school feel to me, so I decide to stick with the d6.

In this case I am using 'humanoid' to refer to goblins, orcs, ogres, etc...things not human or demi-human, not necessarily evil per se, but certainly not the usual friendly types you'd invite to over to dinner.

Using my method of random encounter checks and stumble upon checks I discover that the pair did not stumble upon anything but they did encounter something! Using my table above, I determine that it is a monster! Drat! I was hoping they might catch a break. Well, let's figure out what they have encountered.

A centaur! Hmmm, this is interesting. Let's use my die-based oracle:

Did the centaur ambush them? No, and.... he has spotted them, but they have not spotted him yet. He is watching them from afar.
Here I was at a loss, so I grabbed the Table Fable book and determine randomly that the centaur is...scared??  Hmmm, back to the oracle.
Is someone or something after him? Yes, and...
Is it being hunted? Yes, and...
Is the hunter a person? A tie and the white die is a 3. Quite ambiguous, and even the white die is middle of the road. My first thought was if this was a yes, it would be a person, if a no then that meant some sort of monster, but here the oracle provides little. What is neither a man nor a monster? Then it hit me....a spirit! Interesting. I randomly come up with the name of Myndaril for our new NPC, Myndaril the hunted centaur.

Our boys were spotted but so far they thought they were alone, suddenly Myndaril shouts "Begone!" This alerts the boys, who spot the centaur off in the forest who suddenly appears to be arguing with some unseen person. "Begone, I say!"

Is he mad (crazy)? No
Is he angry? Yes
Angered at the unseen person, Myndaril charges forward, apparently attempting to flee from this spirit, and inadvertently plows in Tristan, both tumble to the ground. Trist stands and tries to calm the situation, getting a positive reaction (applying his Charisma bonus). Myndaril stands, shaken but generally friendly.

Trying to figure out why a spirit is haunting him, I turn to the oracle again. Is he cursed? Yes
Aha! So he is haunted because someone placed a curse upon him.

The pair eye each other, Tris attempting to calm the bedraggled centaur.
Does he calm Myndaril (I add Tris's Charisma mod)? No, and...
Bad, bad all around. Tristan constant gibbering angers Myndaril and he takes a halfhearted swing at Tris causing him to duck, which gives the centaur the opportunity to dash past the cleric and off into the trees. As he rides off, the pair hears him shouting angrily "No! Begone I say, it was not my fault!"

Does anything else happen along the trail until nightfall? No.

The boys continue and pick a spot to camp, they begin setting up camp....

Does anything happen during the night? Yes, and...
Does it happen during the first shirt (6pm to midnight)? Yes.
At what hour? I roll a d6 and add it to 6pm, coming up with a 2 brings us to 8pm.
But what happens? Do they encounter a monster? Yes, but..
Are they surprised? Yes, but...

As they are setting up camp, but before they get out of their armor. Kip spots movement in the trees above (oddly this was completely random but fit into the narrative perfectly), alerting his friend moments before the gecko drops on him, effectively negating the surprise. However, they lose initiative and Tris takes a massive blow, dropping him to just 2hp. Kip manages a solid hit, doing 5hp of damage. For a few rounds, the sides trade swings but no one hits, then suddenly Kip is struck, dropping him to just 2 hit points as well. It was looking grim and then, initiative is tied!

The beast rolls and hits Kip...for just 1hp. Now Tris has 2hp and Kip has just 1hp. They turn to resolve their attacks....

It was a desperate and dangerous battle, one they barely survived. Kip's last strike sliced into the creature's gut and as the two heroes lay resting, unable to stand, they look over and see a surprising thing...

Inside the creature's gut are three gems!

Here is what our hexmap looks like so far: 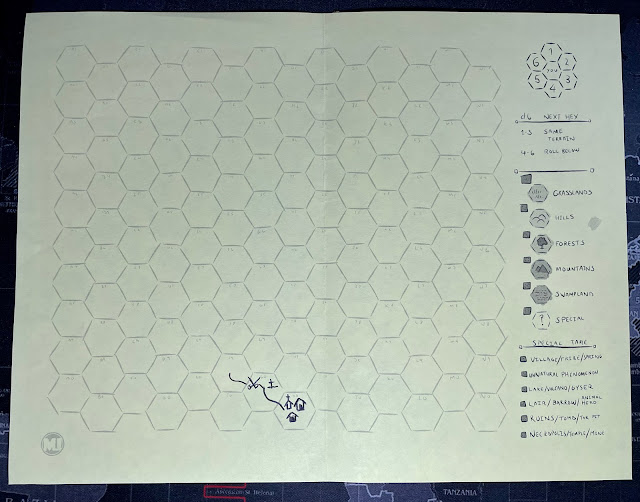 I switched things up between the centaur encounter and the gecko. I was digging through my dice bag and found my d30. I have had it for years but not really used it and that jarred my memory. I remembered I had the d30 Companion and I quickly switched from the Table Fables books to it. Nothing wrong with the TF books, I just prefer the d30 Companion book and it gave me the opportunity to use the d30 I had laying around.