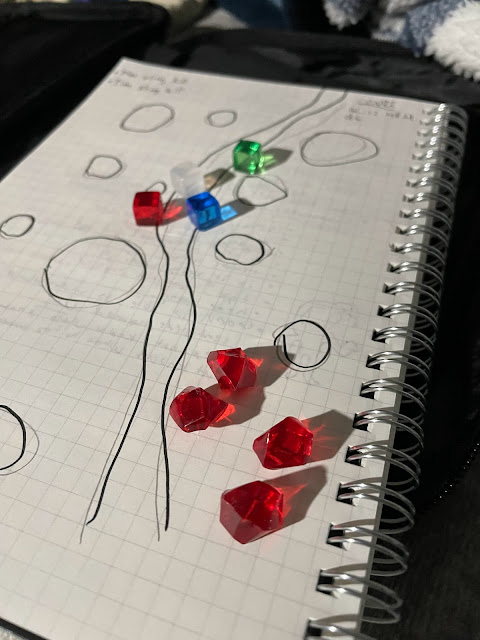 Work has been killing me, I am not sure I am enjoying this new job. My old job actually came (twice now!) and offered me my old job back. Anyway, I finally got a chance to head back our little trio near Whorle...

I was tired tonight so I took my pack of gaming essentials to bed with me, determined to play. I have been trying to put together a sort of 'everything essential I need to play' in a convenient package thing and I settled on a journal/pencil holder thing. I am not 100% happy with it, but it will work for now.

Our group slept through the night, waking in the morning rested and ready to get going. Each attempted to open the door to the next chamber but none could. This is because it is a magically sealed portal (per the notes on Barrow 52). Frustrated and defeated, the group decided an hour wasted on the door is enough and decided to head out of the barrow with their 700gp(!).

I rolled to determine if any monster was waiting for them in the room they had cleared previously. No, but was my result. I began a series of oracle questions using MUNE (see below) and a great book called "The Perilous Wilds" that has some great tables in the back to help randomly generate encounters, locations, NPCs, towns, etc.

I should note here that I deviated from using my old oracle and switched to one called "MUNE" I found online ( https://homebrewery.naturalcrit.com/share/rkmo0t9k4Q ), while it is not perfect, it is very easy and lite. I used MUNE and The Perilous Wilds book found here: https://www.drivethrurpg.com/product/156979/The-Perilous-Wilds

You can follow my oracle questions. My typical way of handling oracles is to ask a question then interpret, ask the first thing that comes to mind. This is sort of a conversation I have with the dice, a back and forth with me asking the dice questions and then using the results as well as random tables to determine the situations. It is kind of a hard thing to grasp until you do it a few times and get comfortable with just rolling with it. In this case it went like this:

Encounter in the first room (or the barrow)? No, but
I turned to TPW books to determine random events and rolled encounter, kinda opposite from the first result but using the TPW book I determined it to be 'a beast' instead of 'a monster'. Using further tables in TPW I determined this to be a centipede.
Is this the entity? Yes
Is it friendly?  Yes, and  Here the 'and' got me wondering along with this being distinguished from a monster with 'entity'
Anything strange going on? Yes Hmmm, what could this be?
Is it intelligent?  Yes!
Can it talk? Yes Hey, this is a mythic setting, not the real medieval world, why cant we have an intelligent and speaking giant centipede? I started wondering why it was here, but I wanted to get a clue as to its character...
Trait? Afraid Perfect! Why would a giant centipede be afraid? Is something after it?
Is it being hunted? Yes 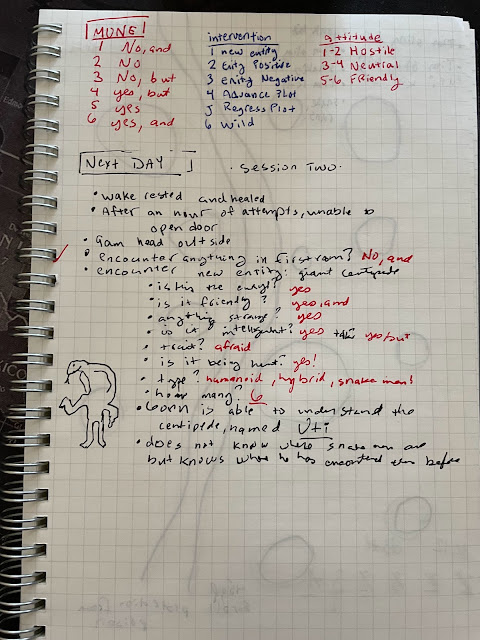 Essentially, I determined that something was waiting for us int he next room, a scared giant centipede that was hiding from vile snakemen that had been hunting it. Oddly, it was intelligent and could speak (whooohoooo, crazy ass dice!). After Charisma checks and some interesting oracle rolls the group decided to help the centipede named Uti, after all, everyone hates snakemen, right? Poor Uti was scared, having had his family slaughtered by these beastmen for their meals and he was afraid he would become the next snack. Uti did not know exactly where the snakemen were but he knew the general area where he encountered them and could lead us to the wooded area nearby where they had last attacked his family.
I determined the snakemen were camping nearby and the extremely deft halfling Timbal was able to scout through the wilderness using his Near Invisibility trait to locate the camp. I drew up a quick map of the location, dropping dice to randomly determine where tree trunks were and how large the trees were. Drop a handful of d6s, larger the number, the thicker the tree kind of thing. Then I used some plastic pieces that came in Tin Helm and The Gate games to indicate locations. My set up: 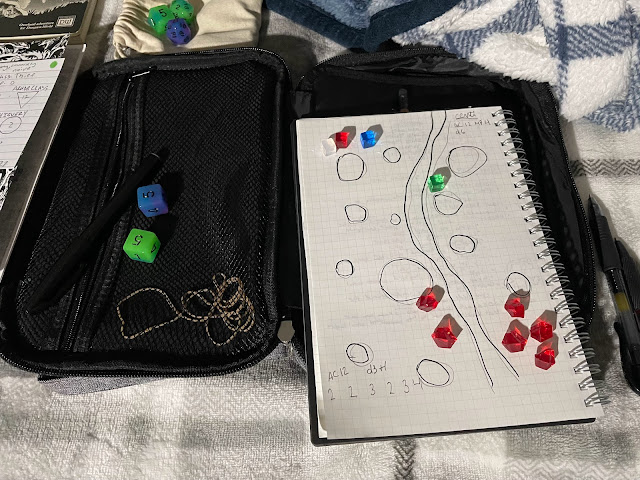 I quickly determined there were six of the snakemen and generated some quick stats: HD1, AC12, ATT1 DAM d3+1 and we were off. Timbal climbed up a tree, sat on the branch and began lobbing stones with his sling, rolling exceptionally well. Cutting down one that had been on guard, allowing the remainder of the group to move in and get close. Gorn stood in the middle of an animal trail and boastfully let out a challenge. The snakemen charged, Timbal picked off yet another snakeman as they charged the party.
The party met the snakemen on the trail, Uti immediately laying one low, emboldened by the support of his new friends. Gorn was struck for 2 damage. The next round Timbal cut another one down, with over half of their kin gone, they fail a moral roll and turn to run. Timbal manages to take another down with his sling as they ran for their lives. Timbal with the full auto sling! (You can follow the battle with my notes in the top right below, I wrote 'Gonk' instead of 'Gorn', guess I was tired). 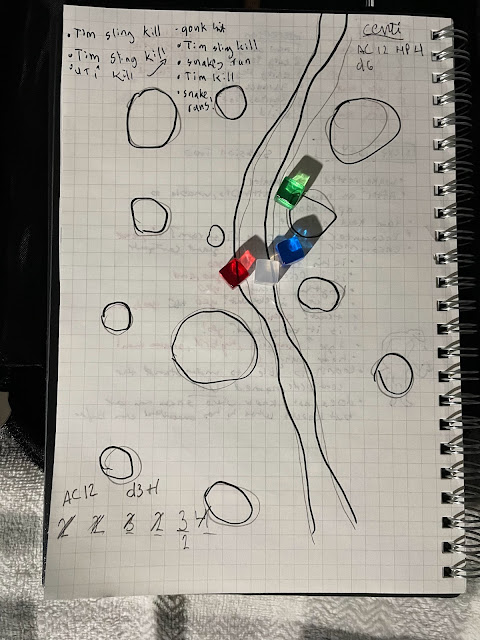 Using the random tables the party recovered 45gp and a scroll from the snakemen's camp and I ended the session there. All in all, a quite interesting session with an ally I would never have thought of and some badguys that would have never occurred to me either.
Here was my set up from last night: 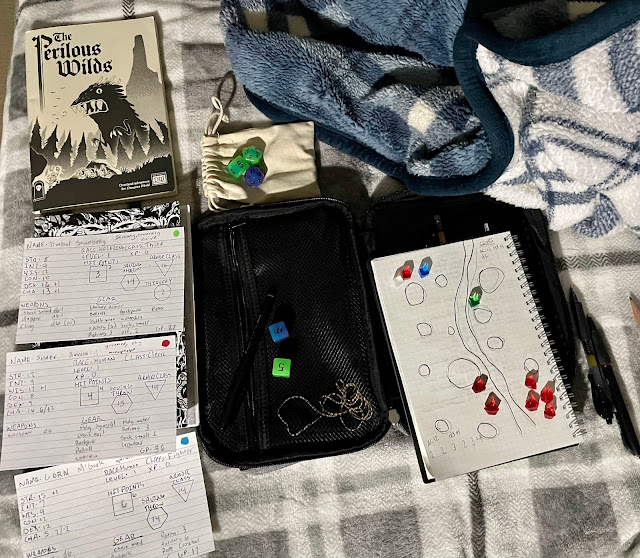