DDiW: how to use an oracle 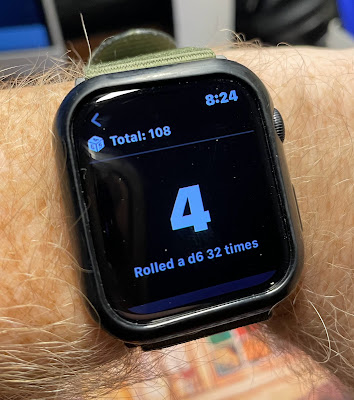 I tend to record audio messages to some good friends in the evening when I walk my pups. Tonight as I was out walking, I started thinking:

What does Uti know about the area our little group is exploring?

Then I remembered I had installed a die roller on my Apple Watch (while their phones suck goat balls, they did a bang up job with their watch, Google needs to buy a couple of these and study them). Recalling MUNE, I decided to do a little oracling while I was out with the pups....

Does Uti know of a location nearby that we could explore? Yes

Are they occupied? Yes

Are they mundane creatures? No (by mundane I mean normal creatures we might find in our world: bears, raccoons, monkeys, cows, tigers, etc)

Are they fantastic? No, but (meaning mythic, something we would expect to find in D&D monster manual sort of thing)

This caught me off guard and I had to stop and think for quite a bit before it dawned on me. What is not a mundane creature but also not fantastic? Only one thing came to mind:

Are the ruins occupied by men? Yes!

Do these men stand against Whorle? Yes, but

Are they waiting waiting for something? Yes, and...

Are they waiting for a certain person? No

Waiting for something? Yes

Is this thing in Whorle? No

Does someone in Whorle know where this thing is? No

Is the leader of this group fantastic? Yes, and

Can he work the dark arts? Yes, and

Is he undead? Yes

Does this leader know where this thing is located? No

Is there something beneath Whorle? Yes

In summation, utilizing my watch while out walking the dogs, I was able to determine that Uti knows of a camp in a nearby ruins where a group of men who serve some undead master is searching for some artifact, but he needs this artifact before he enters Whorle, likely because of something that lies beneath Whorle. So, just to be clear, using a simple oracle and my own imagination, asking questions, I was able to come up with what could easily be a campaign-defining outline

Also, I bought a bunch or dice, check 'em out. 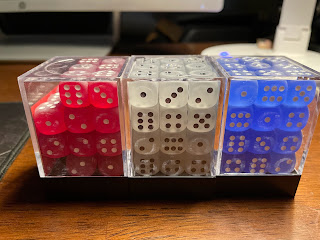 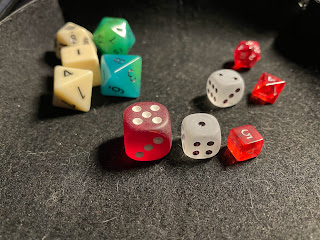 I found the tiniest set of polyhedral dice ever!
10mm, look at those tiny things!