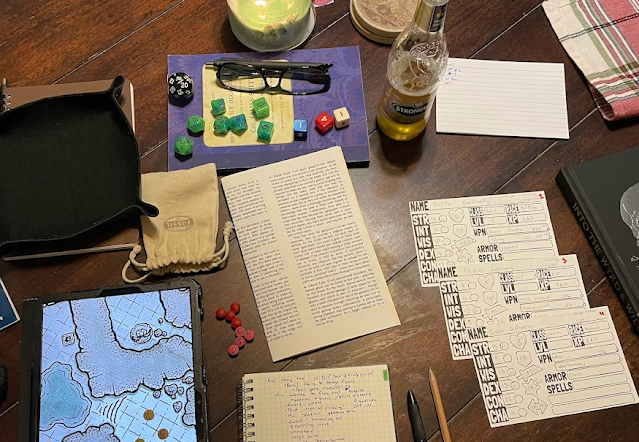 The band continues onward with Findara searching the room. She discovers a passage behind a cluster of rocks against the northern wall of the chamber. Passage is tight but Toltin volunteers to squeeze through and see if he can discover what lies beyond.

Fun little sidebar: Here I discovered that the published module was missing any information on what lies in room 4a, despite it being labeled on the map. No biggie, we can figure this out! I turn to the d30 books, but they offer no help.

Toltin enters a shadowy chamber with an altar at the far end, with a figure kneeling before it, as if in prayer. He makes his thievery check (here I use the thievery skill check, adding Toltin's DEX modifier) and sneaks around to the side enough to see the rotting face of an undead creature, it's mouth slowly moving in prayer. Horrified at being alone in the room with this creature, he quickly - albeit quietly - exits to inform his friends. 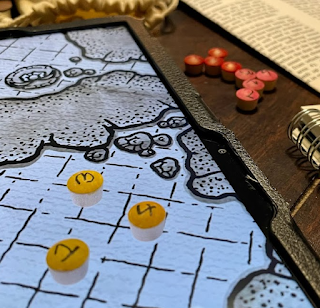 Grindella is unphased and declares 'I can take this creature!' before uttering a prayer to her god.

Toltin again attempts to sneak into the room, but fails miserably, and alerts the ghoul who turns to face the intruders. Initiative ties! Toltin lets a sling loose and whacks the beast in the head for 6hp! The ghoul closes and reaches for Toltin who deftly steps out of its reach.

Band wins init. Toltin hits again for 1hp, followed by an equally weak hit for 1hp from Findara. Furious at another unnaturally dead creature Grindella screams in holy anger and charges the creature, knocking it down with a strike to the head, and quickly crushes the brainpan with her feet. The ghoul is silent!

A quick search of the room turns up a few trinkets of jewelry worth around 20gp. Tired from their ordeal, Grindella suggests they rest for a while and recharge. They rest for six hours, nibbling on rations, drinking from their waterskins, and catching a few Zzzzs. 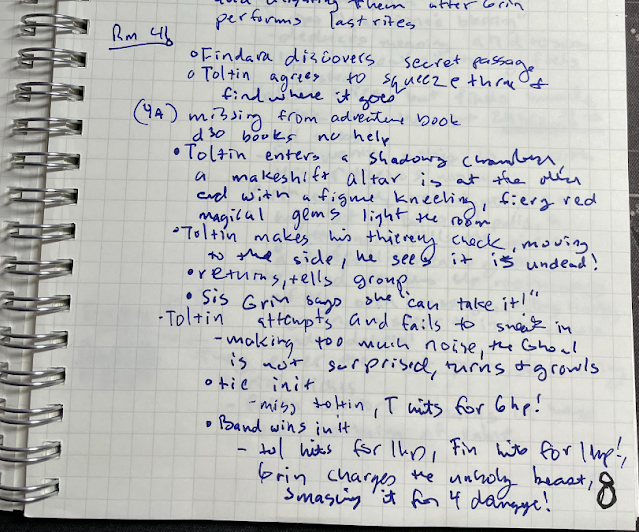