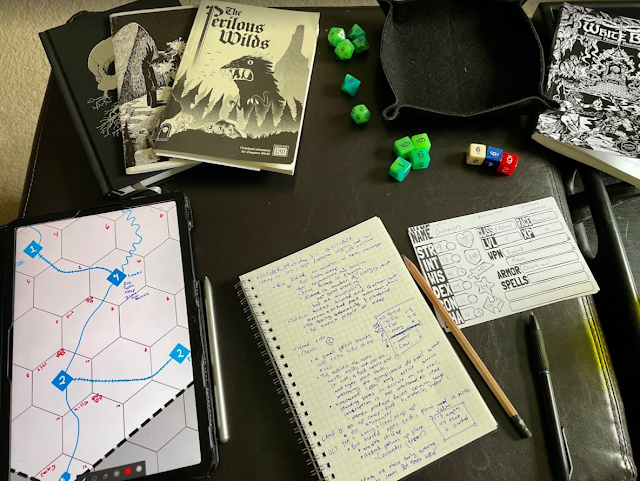 Octobri 16th
Weather is low today, about 45°, cold and overcast.

Brother Aldred, a middle-aged, pale-skinned, cautious man and servant of the one God is being sent on a task by the Bishop of Elswyth to Fort Rot Tooth. He was chosen for this task because he is the brother of the current commander of the fort, Captain Loilor. Aldred is a member of the clergy in Elswyth but not currently in good standing due to having been caught spreading falsehoods.

Accompanying him on this task is his good friend, Toltin Barebelly, a halfling, or hobbin as his people prefer to be called. Toltin is a roguish young man with mismatched eyes and a vengeful spirit, but he is loyal to the end and he refuses to let his friend traverse the dangerous roads to the fort alone. Toltin knows many people at the fort but is unaware that Toltin’s anger burns hot for one particular person at the Fort, and he is eager for revenge.

The bishop has recruited another traveler to accompany the pair, a warrior named Garmon. The man with a pockmarked face is a servant of the church, but one working through demons of his own past deeds caused by his impulsive and impatient personality.

I rolled all three characters according to the rules in WB:FMAG and then used the tables in Freebooters on the Frontier to determine random virtues and vices. I also used my oracle to determine the relationships between the three characters, the bishop and the brother at the fort.

The trio gear up and set out on the somewhat commonly used trail to the fort, roughly a two day walk away from Elswyth. Setting off mid-morning, they are hoping to make it about halfway and set up camp in a mostly safe location. The forest is notorious for being dangerous and few would recommend stepping from the path. 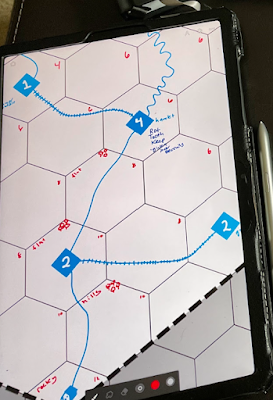 I am using the Forest as a Dungeon section in the Into the Wyrd and Wild book to determine locations of  various places within the hex, the size of each of those locations, the paths between them. I also determined that the farther away from Elswyth one traveled the more likely the chance for a random encounter. You can see this reflected in the image below by the number in the right upper corner of each sub-hex (a 1 in 6 chance, a 1 in 4 chance, etc). The entire area is heavily forested but I threw together a quick table on the spot to determine the underlying terrain beneath the blanketing forest, you can see this in the top left of some hexes below as "flat", "hills', or "rocky". An observant person might notice the fort actually began as a keep, which I later changed to a fort so I could reuse one of my own maps.

As evening approaches the group has come across a small clearing surrounded by a ring of gnarly looking trees, full of wrinkles and folds, nary a leaf droops from their twisted and black limbs. Toltin notices one odd looking tree, covered in wrinkled bark. Suddenly a fold opens, exposing a large eyeball staring back at him and the group.

These encounters were randomly generated using the tables in The Perilous Wilds. The tables are wonderfully varied and somewhat vague enough that they inspire creativity instead of simply giving you the answer. In my opinion, these tables are highly effective and creating unique and unexpected encounters covering a wide range of possibilities. Each roll provides a certain level of detail with additional rolls providing even more detail and depth. I use them until something piques my interest and/or creativity springs forth and the ideas begin to flow. 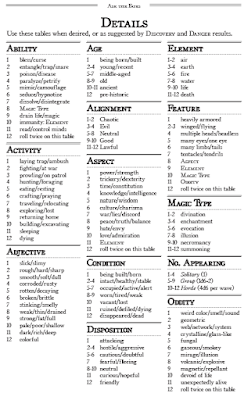 Unsettled by this, they continue a short way and then find another area - a ring of standing stones. Investigating,  Toltin and Garmon are overcome with a calming feeling while within the stone ring. A more cautious man, Aldred is not comfortable and worried about personal exposure to the unnatural and heathen powers of the forest.

The group settles in for the night, Toltin forages for berries and using his sling actually scores two squirrels that Garmon is able to cook up a decent meal without using one of their rations. A nearby stream allows them to refresh their wineskins and head into their bedrolls with full bellies. A watch is set up and the fire doused so as to not attract attention.

I used the Wyrd and Wild rules for supply usage and quickly hacked up a way to use these with the existing WB:FMAG rules to cover the food and water (I plan on tracking rations, water, and torches because I want survival to be important but also the possibility of failure to always be there). I split the night into segments of three hours (6-9, 9-12, 12-3, 3-6), rolling for each a d6. Luckily for our group, they never rolled a one and made it through the entire night rested and without bother.

For those so inclined, I have included shots of my notebook I used to run this. The above took about two hours as I was fumbling a little at the beginning on how to get started, which tools to use and determining the details of the hex, why the group was together, and exactly how to get started. Once I had all these pieces ironed out, the actual playing did not take muc more than 30-45 minutes. The truth is, it really is quite hard to get going. 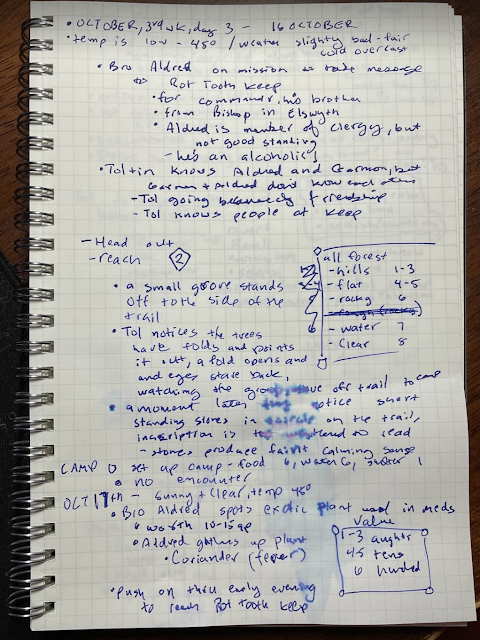