Wilds, Freebooters on the Frontier and Into the Wyrd and Wild. I use my own oracle and a handful of tables from PW and FotF to generate almost everything on the fly. I have written this out in a sort of journal style mostly because I enjoy writing. Behind the scenes notes are in italics.
Start here: Episode One

Octobri 20th
Weather still sucks. I am rolling terrible on the weather.

Toltin wakes up from a restless night of sleep, haunted by the visions of beautiful maidens swallowing his companions whole, one of which was a close friend. Hungry, Toltin heads to the hall and grabs a plate of eggs, slab of ham, and mead. He strikes up conversation with a few men and learns that previously a soldier was lost at the river to the very same beast! An idea pops into his head...

Gaining an audience with Loilor, who has now had to time ponder over this new development, Toltin tells the captain how he wants revenge and asks if he can spare any men to avenge his brother's death. The captain ponders a moment, a grim look crosses his face, and he informs Toltin that he cannot. However, he can offer a reward of 100gp to every man who would help Toltin with his task. He bids the man farewell, saying he will be successful!

Remembering he saw a few other travelers in the hall, he heads there, hoping that some are adventurers looking for fame and glory!

I randomly determined there were three adventuring sorts in the hall, looking for an adventure. Using the random generator at https://osr.smolderingwizard.com/ I quickly put together three adventurers.

<--- WB ability score bonus/penalty
One note here. At this point I opted to begin using the Ability Score bonuses out of B/X rather than BW. The main reason is that I do a lot of things by ability checks. I use a method devised by Tim from Gothridge Manor.  Using the ability score bonus/penalty from B/X allows a wider variance in the characters' abilities when attempting things not defined directly by the rules. 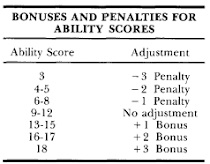 <---- B/X ability score bonus/penalty & Ability Check Method
In many situations I will ask for an ability check and assign a difficulty target, usually a 10 (easy),  14 (moderate), 18 (hard), etc. I typically will use 12, 14, or 16 for most checks, based on common sense and the situation. Still, these are just general guides. The Gothridge Manor ACM goes like this:
o DM determines a target based on the situation
o Player rolls d20, aiming to roll equal to or higher
o Player adds the character's level + any bonus/penalty from an appropriate ability

Toltin recruits a dwarven warrior named Basil the Stoutbellied, an elven woman named Findara Greensong who carries a bow, and a holy woman named Sister Grindella. Basil is shoving lambchops into his wide belly, Findara stabs a chicken breast a little too roughly, and Sister Grindella claims that she will certainly be of use in the task at hand because she "will not be so easily swayed into the creatures maw like a simple man." After discussions, they agree to finish their meal, then head out of the fort and towards the river, hoping to reach it before nightfall. 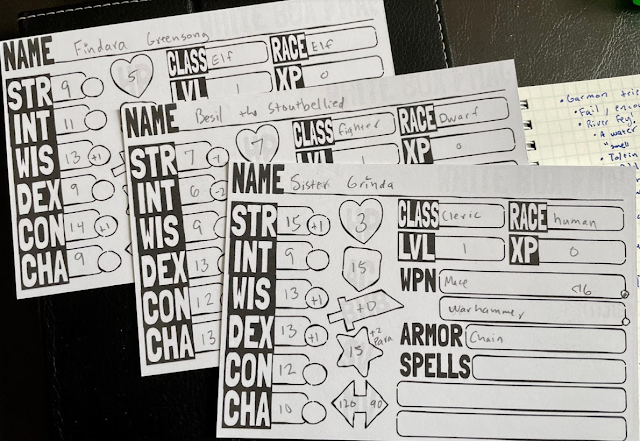 As I have already checked for weather I skip this, but as we are entering the wilderness and crossing a hex, I need to do an Encounter Check, and sure enough, I roll a 1. 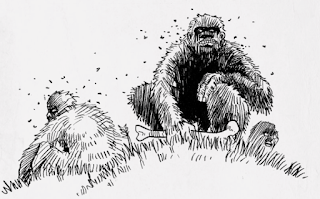 Barely an hour outside of the fort, the band is suddenly engulfed in an atrocious smell, rotting flesh, urine, and poo...picture this heap in a hot Alabama summer and you have a good idea. Basil is familiar with this and informs the group they have been discovered by a pack of Skunk Apes! He grins wildly as he informs his friends that the pelt of a Skunk Ape is not only rare, but very valuable! Findara tests the wind to determine from whence the smell cometh. She silently points to a nearby ridge overlooking their position. Two hulking shapes can be seen among the foliage, the apes are upon them! 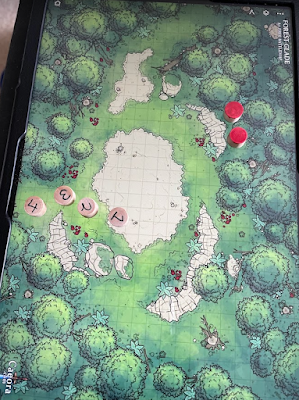 The band immediately reach for missile weapons, Fin launches an arrow and Tol lets a rock fly from his sling, both hitting and causing damage. Enraged, the beast charge forward spreading their smell. The entire band save Basil fail their save and become nauseous, gaining a -4 penalty to all actions.

Another round passes but the party fail to strike except (again) for Basil who manages a single point of damage on the beasts. Luckily the beasts are also terrible in melee and miss their attacks. The next round Toltin strikes and slays one ape with his sling. Now without a companion, the other ape rethinks the plan and turns, bolting into the forest. Missiles are launched at his disappearing rear but fail to connect.

Basil, despite the disgusting smell, is eager to cash in on this pelt and convinces the elf to aid him. Findara uses her skill at cleaning the kill and manages to score the genitals, an unscathed skull, and pelt while the rest of the party keeps watch. Basil is besides himself with the idea of how much this is worth back in the fort. He assumes Brother Iben will be eager to purchase these from the group for studying.

I used the cleaning a kill rules in the Into the Wyrd & Wild book to determine these rules. I have never had players clean a kill but I thought idea was fantastic. After all, how else would magic-users create all those cool potions and magic items without awesome monster parts! I originally wrote that they recovered 100lbs of meat, but then thought it better to leave that. Who would eat that garbage infested flesh? Barf!

After cleaning the kill, the band continues onward towards the river along the barely-there trail. They continue another three hours until night begins to fall. Searching for a good campsite off the trail, they discover a twenty foot tall statue nestled among the trees and bushes. Part of the statue has fallen and the thing is clearly very old. Near the statues base, Basil and Toltin uncover the entrance to an old cavern hidden among the bushes with markings clearly making this a tomb of some sort. Basil is eager to explore but the rest of the group convince him to wait for another day, that the siren is their task.

They set up camp nearby - but not too nearby - the statue. The night passes uneventfully except for Findara waking them at 5am to an odd owl that landed on the statue's shoulder and stared at them. Unnerved, they begrudgingly got up, packed up, and began their trek to the river and the blasted damn siren. 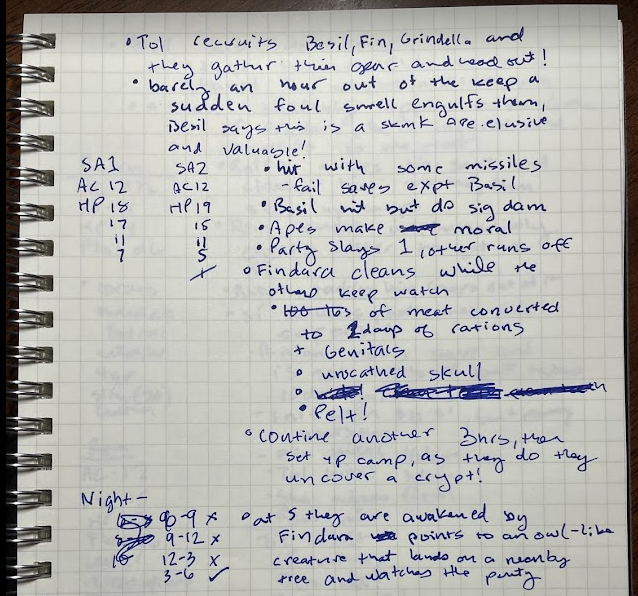