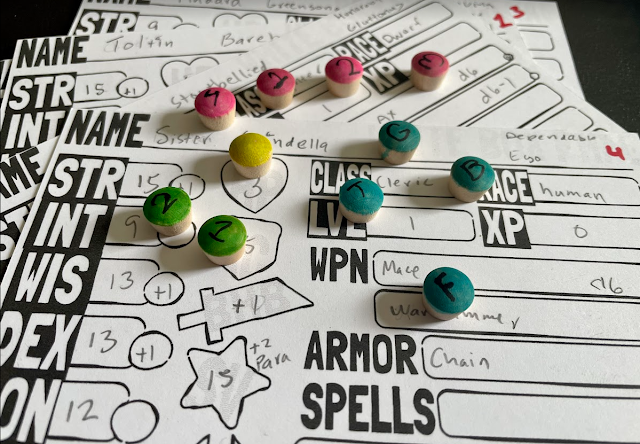 Octobri 21th
Weather still sucks. I forgot to roll weather, assume it is overcast and cold.

The band approaches the river and knowing what lies ahead they stop to formulate a plan. I suddenly have the idea of packing moss into our ears, as a means of reducing or stopping the siren's magical effect. As the GM I know this will have zero effect because the Lure effect is by smell, but hey, PCs have crazy ideas. I decide to use the oracle to see if this has any effect, I give this an unlikely success (meaning the white and red die roll for negative). The dice roll a 6 on blue, meaning this will help. Against I ask (with more likely negative result) and get a 5 on blue. I roll a d6 to see how helpful this will be and it is a +4 on their saves. Sometimes you just have to roll with the momentum and screw the rules.....

The group spots the rive and move into position, with Findara moving to a position on a bluff overlooking the river, thinking she will have an overwatch position and be able to snipe with her bow.  Basil moves down to the river's edge, without a ranged weapon he will need to cross quickly to strike the siren. As luck would have it, they have found a sandy area of the river where the crossing will be easy. Toltin and Grindella set up on a rise over the river, close enough to support with missile weapons but also close in case they need to cross the river.

However, Si-lireth spots Findara almost immediately and deduces that they are hunting her and setting a trap. She waits, bathing in the waters.

Toltin whispers down to Basil. Basil pretends to set up camp, letting out his bedroll, collecting firewood, etc. He hopes that the siren will grow weary of waiting and will come closer, enabling him to attack (and letting his friends have closer targets). Basil figures it this way, "Who could resist a sexy dwarf like him?"

Three hours later....Basil is napping lightly next to the river on his bedroll.

Suddenly a man appears farther upstream. He crashes out of the brush just upstream from Basil and plops into the stream, limping and seemingly wounded. Surprisingly, he makes his save and is unaware of the dangerous situation he has wandered into. He washes off the wound in his leg and then steps back onto the shore, begins setting up camp. The siren has taken notice of him and has warily moved closer. Minutes later, a second man stumbles out of the forest. He moved towards this second camp and just before dropping down to rest with his friends, he suddenly looks to the east, across the river.

Moments later he quickly sets off across the river and towards the hidden siren, enchanted with her wonderful, but deadly, scent.

I determined this by rolling the oracle and asking if anything happens while we wait. The answer came back strongly yes. Further questions drilled down to the fact that the siren did not attack, or run, but that something else wandered in. The table in PW determined it was a pair of humans, brigands or criminals actually, and that one was wounded. I used the smolderingwizard random character generator to quickly roll up the two characters and gave them names from FotF. Raten made his save, but then Rem failed when he got in range of the siren's powers.

The siren rises up out of the water and Raten realizes what is about to happen, I mean there is a naked woman running around a deadly forest, you would know something was up... Raten runs after his friend, tackling him to try to snap him out of it.Rem finds himself face to face with the beautiful siren standing over both of the men...both men are surprised.

Si attacks, Raten makes his save and is not swallowed whole, however he does take damage from the attack, dying from the attack with 10 damage (max roll). Rem is in shock and merely stands there, waiting for death! 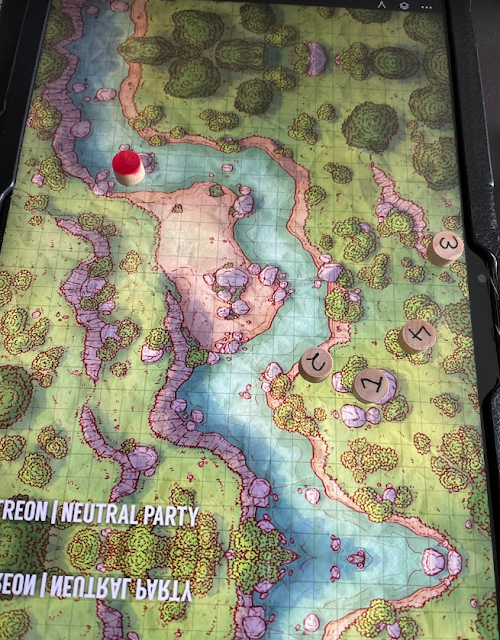 I used my tablet along with some wooden furniture plugs I had as minis.

Si wins initiative, but the band beats her and launches into attack mode! Findara fires her bow, striking for 4 damage. Toltin spins his sling and nails the vile creature for 3 damage. Si misses Rem as he steps to the side but then he slips on the wet sand and misses her as well.

Next round initiative is tied! I use the Tale of the Manticore rule that ties go simultaneously. This gives each side the opportunity to win at combat while also suffering with a last ditch strike. Si goes first, narrowly missing Rem. Rem steps up and hacks at the siren, cutting her deeply. Findara strikes true with her bow and the evil siren falls into the water, her body slowly dissolving into an oily liquid and fades into the moving river water.

Brother Aldred and Garmon are avenged!

As a last step, I wondered if Rem was wanted in Rot Tooth, the oracle tells me is not! I perform a quick check to see if the band will welcome him, they do, and he agrees to return to Fort Rot Tooth with them.