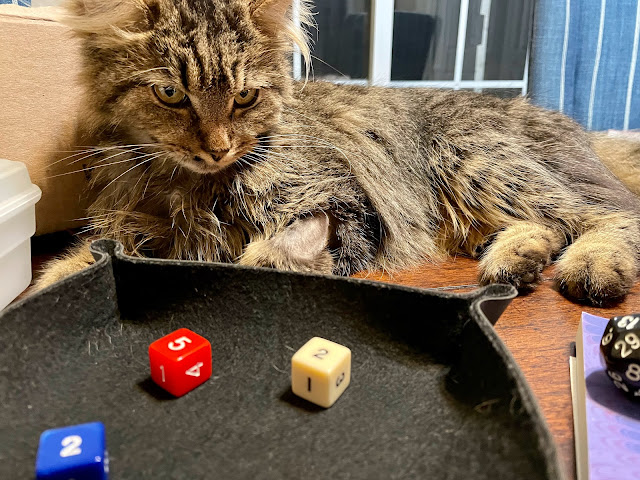 Just want to take a moment and say something. I have been very busy with two members of my family graduating from college, traveling to two different states to see them, then watching the lovely little cat in the photo above slowly waste away from a failed kidney.  The most vibrant, wild, and craziest personality I have ever encountered in a cat. She was my constant companion after my fall last year and I was stuck recovering in the house. We had our moments but we soon became fast friends and whenever I looked, there she was, my little shadow. Her time with us was amazing and she filled it with more life than most in her brief time in our home, we are very sad to see her leave us. I know you are chasing birds and rabbits in heaven, Penelope. We will miss you, little P! 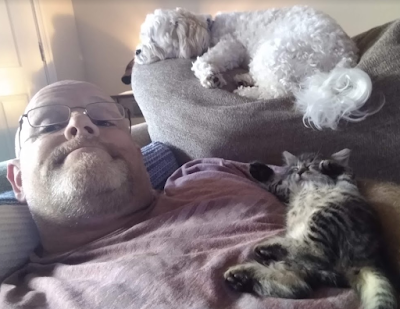 Me, Mick, and P chillin' three years ago

The sides tie initiative. The ghoul lunges at the partially buried Basil, gripping the dwarf around the throat, Basil is shocked and terrified, but somehow managed to regain his composure. [Basil made his save] He pushes the ghoul away with his foot and in terror pulls himself from the piled up bones. The ghoul flops down on to the bones and Grin swings but strikes only bones. Fin launches another arrow, lodging it solidly in the creature's skull. Tol manages to locate his sling.

The band wins initiative! Basil slips again and flops into the bones, today just isnt his lucky day. Followed by Findara missing with her bow. Tol lets a stone loose but it goes wide as well. Grindella, having enough of this undead creature, steps up, yells a prayer and lets loos with her hammer and lands a critical! The creature's head smashes into pieces.

Behind the band another ghoul appears just in time to realize its companion is gone. It howls and leaps at the party! [laughably it fumbles] In a blind rage, it misjudges the leap and lands, face first, in the pile of bones. In a moment, the band is on it, hacking mercilessly and within seconds the creature has been shredded.

Catching their breath, the band decided to move on. Turning a corner the see a pool has formed in the sunken room ahead. Across the pool is a room, about 20 feet across and deep within are two pedestals with mean-looking statues atop. THe pool is rank, with somethings floating in the oily, gross water. A thin ledge skirts the edges of the pool and the group decides to continue forward, hugging the wall on the left side of the pool. The adventure states this is an easy test, so I decide a DEX check against a target of 10 makes it across. Toltin makes it easily across, but Basil's wide girth causes him to lose his balance and he suddenly finds himself splashing about in the stinky muck. He is followed by Findara. Grind easily clears the pool. Basil comes out of the pool, angry, wet, and smelly and comes face to face with the gargoyle statues guarding the chamber beyond. Angry and annoyed he pushes onward, attempting to get past them....and is immediately roasted by a blast of oily flames shooting out of the fanged mouths!

A burnt, smoking and very dead Basil tumbles backwards into the pool.... 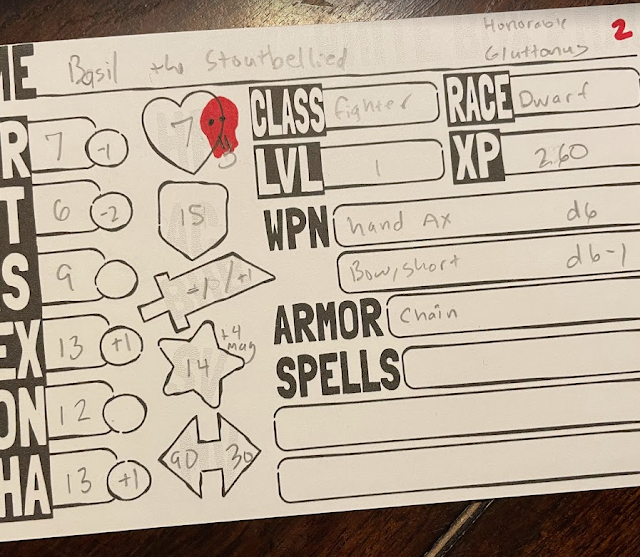 Findara, Toltin, and Grindella fish their friend out of the pool and realize he is beyond help, having marched off to the dark, hallowed halls of the dwarven heavens.

After a moment of digesting this turn of events, Fin realizes the pool is full of victims of the flames and decides to begin pulling their bodies from the pool. I decided to add this to the adventure because it felt like we had survived a bit and gained literally nothing. As a DM, I would have given some reward here if I were to run this with a group. I roll a d10 and get a 9! Nine bodies are recovered and I use an oracle to determine if anything is recoverable from the bodies. The band manages to pull a dwarf, human thief, human MU, and another dwarf from the pool that have the following items they can recover: a sword, a Rope of Climbing (!), a potion (of Gaseous form, the group does not understand the runic symbol on it bottle), a throwing ax, grappling hook, crowbar, large sack, and a wooden holy symbol.

After spending the rest of the afternoon collecting the items they can recover, Fin does a quick search of the rest of the room but finds nothing but a solid door leading, it is assumed, farther into this tomb.  Grindella performs last rights on the bodies, including that of their friend Basil, then Findara puts them to flame, ensuring they cannot rise again.