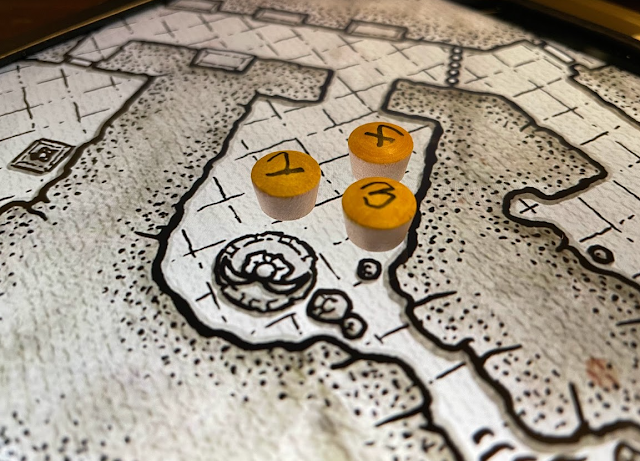 Now rested, the band is ready to press on! Toltin, flush from his previous success at sneaking declares he will try it again and immediately trips as he enters the next room, sprawling on the floor in front of an angelic statue. I rolled he failed his thievery check.

This statue holds a beautiful trident in its right hand while extending a large bowl in the other. Grindella recognizes this as an ancient hero known as Thorfinn, likely she learned this in her studies. She tries to recall more of the story but can only recall his name and he bore a powerful trident. I checked to see if anyone could recall any knowledge of Thorfinn, giving Grindella a +1 to the roll because of her studying. While she made the initial check, she failed at recalling anything additional. She was successful at translating the writing on the bowl.

38gp lies in the bowl and Toltin is about to grab it when Grin translates the writing. Grindella tosses in a gold piece and immediately feels refreshed, as if she had a good night's sleep in a soft bed, a full belly, and was not in a dead-filled tomb. Thinking better of stealing the gold, Toltin instead tosses a gold piece into the bowl. Instead he suddenly feels weary and tired. Toltin complains about the fickleness of the gods. Fin watches her companions and declares she wants nothing to do with this relgious nonsense.

Enamored with the ancient creation before her, Grindella continues to examine the statue and notices a small hinge hidden along the shaft. Grin tests the hinge and is able to move the the trident downward. Elsewhere, they hear a loud rumbling. A portcullis is moving somewhere deeper in the tomb.

The band searches the room, the corners are fills with debris and various pieces of long destroyed equipment. Toltin guards the open passage while they do this. Findara uncovers a spear, shiny as if it were made yesterday. The torch light gleams off the shaft and she is sure this is a special weapon!

This tomb was oddly barren of any treasure and I decided I wanted to roll on the magic tables in the WB book...which are noticeably skewed towards just giving gold pieces. I figured the group might walk away with a few dozen gp. However, I rolled fantastically and instead gained a magic spear +1!

Cautiously, the group enters the next room, discovering it is a passage with burial niches built along its length. They are saddened to learn the niches have already been plundered and nothing of value is discovered. 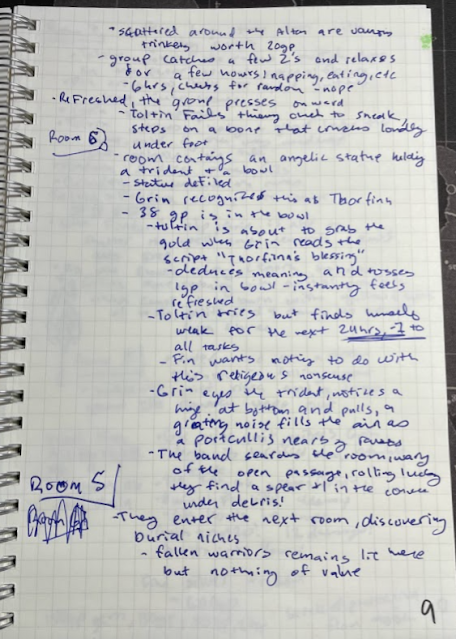