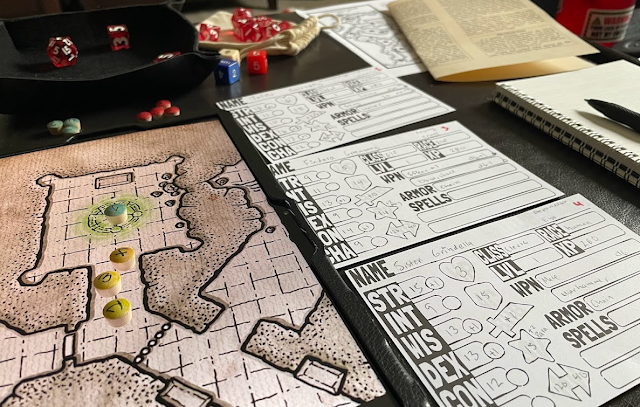 The group turns to the open passage at the end of the burial niches, the portcullis previously raised. They enter the chamber beyond the portcullis and see a large stone door to their left, Toltin notices faintly glowing runes upon its surface. In the room ahead, a spectral figure hangs in the air before, surrounded by green glowing runes on the floor in a circular pattern. I did a quick check to see if anyone might notice these two sets of runes were one and the same, only Toltin succeeds. Findara attempts to converse with the spectre but it merely stares at her. Grindella begins a prayer. His curiosity piqued now, Toltin skirts around the room and find s body on an altar behind the spectral figure. The figure keeps eyes on Grindella and her prayers. 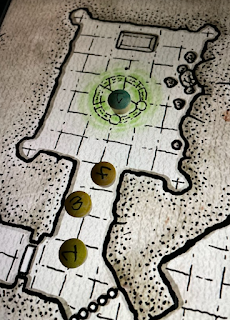 Toltin works out what happened here. "She was sacrificed, he soul used to perform some binding ritual. The runes here match those on the door, I am guessing she is some kind of guardian, preventing others from entering the chamber beyond the stone door." The specter swivels to face the little hobbin.

Grindella is able to translate the runes on the floor. "You are correct master hobbin. Not only was her energy used to create this barrier, it also bound her to its defense. I wonder if we can free her."

At this, Grindella noticed the figure shed a tear.

The three being to focus on the runes and the binding, while Grindella attempts to use her  holy knowledge to right this wrong. At first it seems possible, and initially there is quick progress, but then the foul spirits in play respond. Barriers are put in place and the group fears all is lost. Grandella prays to her One God for assistance and Toltin and Findara each sacrifice 2hp, providing additional energy to Grindella. With a suddenly flash of light, the barrier disappears, the runes fade, and behind them, the group hears the latch in the stone door come unlatched.

Lenora floats upward, then turns to Grindella, clear appreciation in her smile. She touches Grindella's face softly, then bends and touches the priest's mace. It suddenly bursts into cold yellow flame and immediately Grin knows this is holy fire that will send evil back to darkness. Lenora offers one more smile to the group, mouths thank you, then floats towards a light that appears in the ceiling.

Silence falls on the group.

I read ahead to the next room and notice a sidebar about how the Ghoul King could show up at any time. Whoops. Guess this is what you get for not reading ahead. The adventure says the Ghoul King is equal to a ghast, a creature not in the WB:FMAG rulebook. I check quickly my OSE rules and see a ghast is a 4HD creature, equal to a Wraith in WB. So I opt to use it's stats. I roll terribly for hit points, wow, the PCs are lucky! 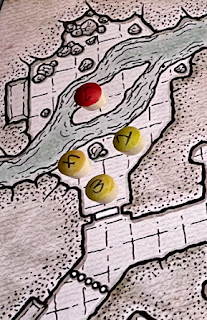 Regaining their composure, the group decides to investigate the stone door. This room has seen better days with substantial damage and parts of the wall having collapsed over the years. A wide but shallow stream causally makes its way across the room from left to right. A low mist starts pouring over the edge of the stream, slowly building in  thickness.

Grindella's mace bursts into flame, its yellow light dancing across the damaged walls, but she is terrified. The Ghoul King wins initiative but his swing goes wide, Grindella, filled with slips on the wet rocks of the stream and stumbles back. Fin moves towards the creature. Toltin sling stone bounces off the Ghoul King.

Staring down death, Grindella roars and smashes the Ghoul King's head, rolling a natural 20! She pulls an amazing 12 points of damage and the creature bursts in flames and is reduced to ashes! Relieved, the band plops down, takes a moment to rest and catch their breath.

After some time resting, the group gets up and goes about systematically searching the room and uncover the following:
- a hard silver trident
- 2x150gp gem
- 50gp gem
- 25gp gem
- a scroll, Grindella studies this and determines this to be a Scroll of Protection from Magic. 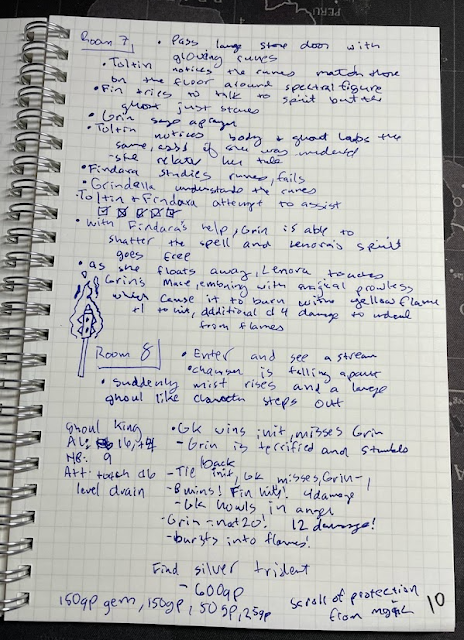