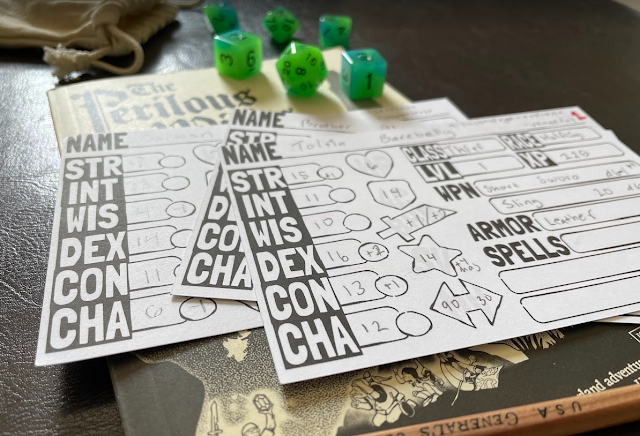 Brother Aldred rises early, ever the devote servant. He scrounges amongst the foliage and gets lucky! Among the weeds and bushes he spots a rare plant, aware of the local market's value, he collects a few, hoping to be able to exchange these for some extra gold at the Fort. He collects 10-15gp worth of Coriander, a plant often used to treat fever and illness. I threw together a quick table on the spot to determine the value of the Coriander. I rolled a 4, noting this was in "10s" value, then rolled a d10, getting just a "1", meaning this would be between 10-20, but likely closer to 10s, in town.

After this, the remainder of the group begrudgingly wake, Aldred noting that Garmon likes his drink late in the evening. Aldred, a noted drunkard, has been taking steps to prove himself a better man and last night stood his ground, resisting the bottle. After a cold breakfast of trail rations, the group mounts the trail again. They keep a wary eye on the thickening forest around them. Rolling a d8 for encounters, noting that this sub-hex had just a 1 in 8 chance, I get a 7. I also rolled for the group to comes across a discovery, though as they are pushing to reach their destination and not searching, they have only a 1 in 6, rolling a 6. They come across nothing.

Pushing through the morning and only stopping for a light lunch and rest, the group manages to reach the fort just as nightfall comes. The fort's hex is a little more away from the civilization of Elswyth, and thus the encounter chance drops to a 1 in 6, here I rolled a 3. The group continues to travel unimpeded by an encounter. Rolling for a discovery, I get a 2, again they discover nothing. Some might claim the journey was less than exciting, but the little band of adventurers are happy to make it to the comfort of the fort without incident. The guards welcome them inside its walls with only a minor questioning. Aldred inquires about seeing his brother. 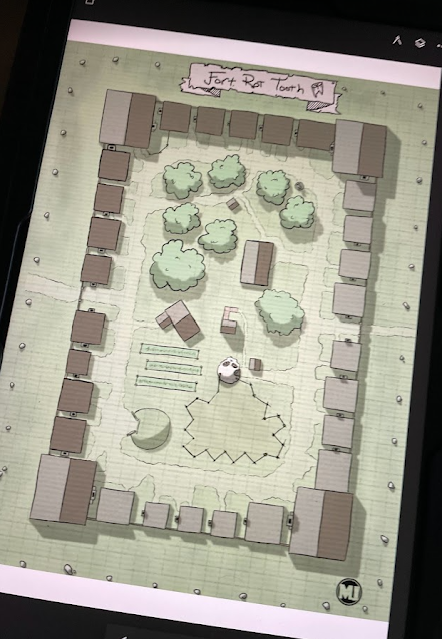 I opted to repurpose one of my maps from last year, made after a visit to Kentucky's Fort Boonesborough State Park (very cool place to visit if you are a history buff). More importantly, we have some things to determine at this juncture.

Aldred's brother, randomly determined to be named Captain Loilor, has the follow details determined- he is an anxious man, worried about those in his care at the fort, he also has a bit of an air of a snob about him, and has a tendency to be a little rude. He also wears a medium length goatee on his face and has large hands (random tables can be weird some times).

I assumed that the fort would have a healer so I thought it prudent to determine who this person was. Also, I thought this might become important with Aldred's discovery of Coriander nearby. I asked the oracle some questions which provided some interesting answers:

Is he a man of the cloth? Ambiguous (weird answer, that later worked out...)
Is this person a poor example of piety? Yes (interesting)
Is this person here as a punishment? No

Quick notes on this person: Brother Iben: wears a headband and robe, head is shaved but he is selflish and coveting. Does he know Aldred? No. Does he know Toltin? Yes. Is he the person Toltin is looking to get revenge upon? No.

At this point I decided to find out who exactly Toltin wants revenge against. I came up with a list of people who might be here in the fort and I thought it might be interesting to keep the person to one of the staff or employees of the fort, thinking the conflict of Toltin harming this person might put Aldred in a tight spot with his brother (conflict spurs interesting outcomes). Randomly I determined that the Quartermaster was the Toltin's target, a dwarf named Ramli (missing teeth and a selfish SOB) swindled Tol in a game. Toltin knows this jerk cheated at a game.

The band is a little unhappy, and Aldred a tad ashamed, when his brother denies them an audience in the evening. Unhappy, they wander over to the dining hall. Toltin looks for his target but does not see him and Aldred is likewise disappointed when he discover the fort healer, Brother Iben, has already turned in for the evening.

The group settles down in the lodging building (open to travelers for free here in the fort so long as there is room and the patrons are in good standing), and turn in for the night. 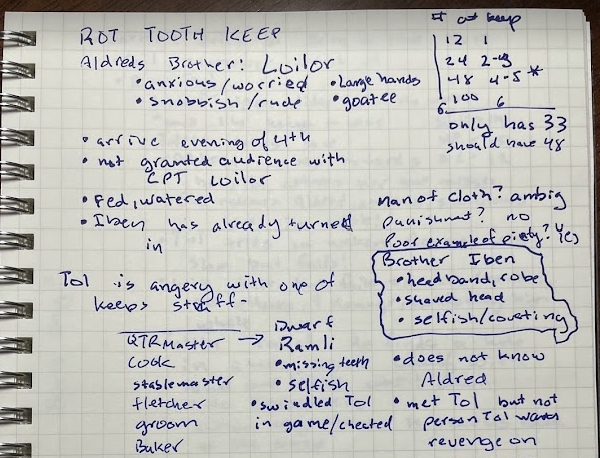