[map] The Abbey of St Martin 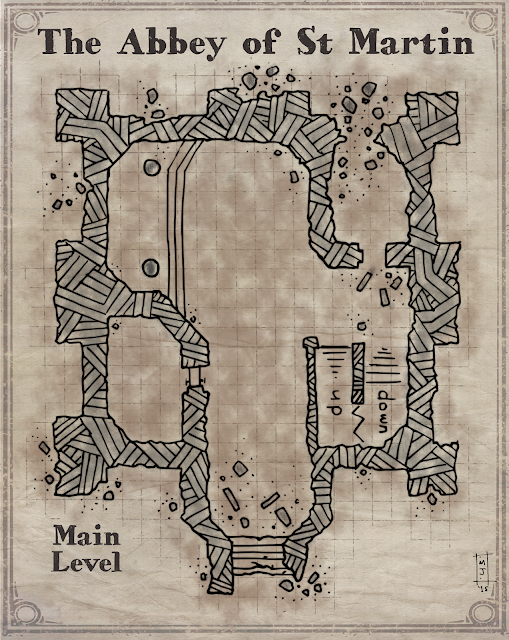 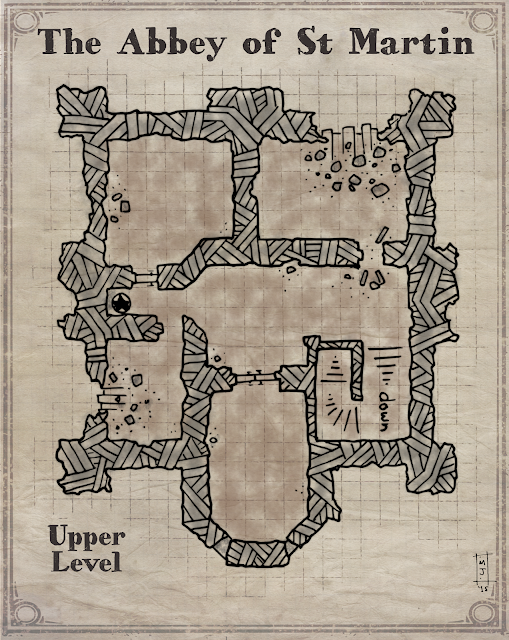 I also put together a very large version, I think this would look badass on a large cloth tapestry that a GM could drop over a table for an adventure with a band of brave souls.

Click on any of the images to head over to my Patreon page to download the original resolution files. If you enjoy the maps, please consider signing up as a patron, every little bit helps me continue to make these maps for gamers everywhere.
No comments:

[map] The Village of Treacle 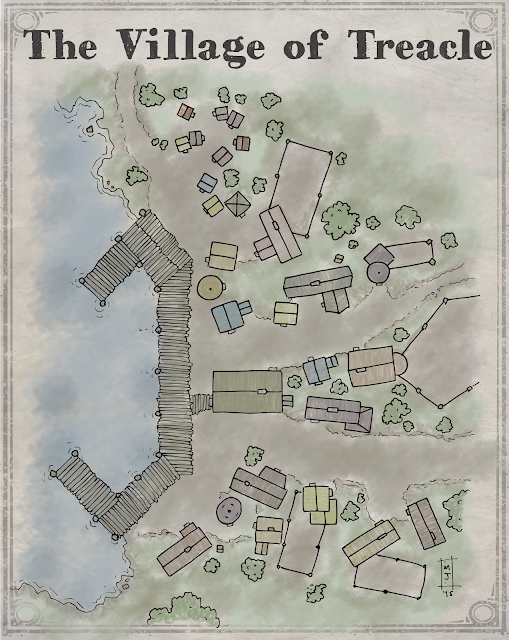 The Village of Treacle sits upon the western edge of the Known Lands, clinging to a hardy life upon the Mistgrume Sea. The village is populated by rough men and women always on edge. Life upon the Mistgloom is a dangerous one and few live more than a decade before succumbing. Most of the men make their living here working the sea, catching fish and clams to feed the village. 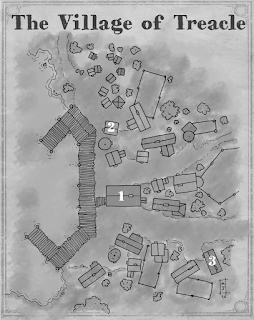 1] A large building near the middle of the village is the one place well known outside of the locals. The Dagget and Blok is a two story building, though not in truth as the first floor is simply the silts upon which the second floor resides. The location is known as a Work Porter and those travelling through can come here to find work, rumors and facts on the local area, like-minded company, and grab something to quench your thirst and hunger. In most cases the barkeep is the source of a knowledge and the most interesting person, here this is not the case. The patrons are by far the sources of knowledge here and for the price of a drink or perhaps a bowl of stew one can learn the wonders of the Palatial Ground of the Golmogis Bollumbog, the Terputmen's Terranium, or even the location of the Lost Gaetus of Felandricus.

2] A brightly painted sign anoints this building as the home of Betterman's Ferry. The building appears sound and in well care from the outside and once entered, visitors will find the inside is no different. The interior of the building contains just a few items: a large black chalkboard rises up behind a simple wooden desk that rises high like a podium. The chalkboard is covered in lines and text, declaring the times of travel to and from Treacle to the far cities of the Known Lands. Next to each time is the illustrious names of the ram and raft that leaves or arrives in Treacle.

At the desk a small and skeleton-like man will judge each visitor from behind wire-rimmed glasses. "Where do you wish to travel," the man will ask in a low and almost annoyed voice. Without emotion the guide will direct the traveler of the time their conveyance will arrive in Treacle. He will charge and extra coin as a fee for arranging the travel.

3] This long building is made of dark and grimy wood with a faded sign that faintly proclaims this to be the residence of Lagonis Brindbarrel's Scripts and Potives. Walking inside will cause one to be struck by the pungent odors of nature, almost overwhelming. The middle of the building is the public area and is overstuffed with shelves containing far too many small vials, pots and bottles of a myriad of various flavors of scripts and potives for the sale. A moment after entering the area a small woman will enter, small and weak looking and yet still strong of mind, this is Lagonis. 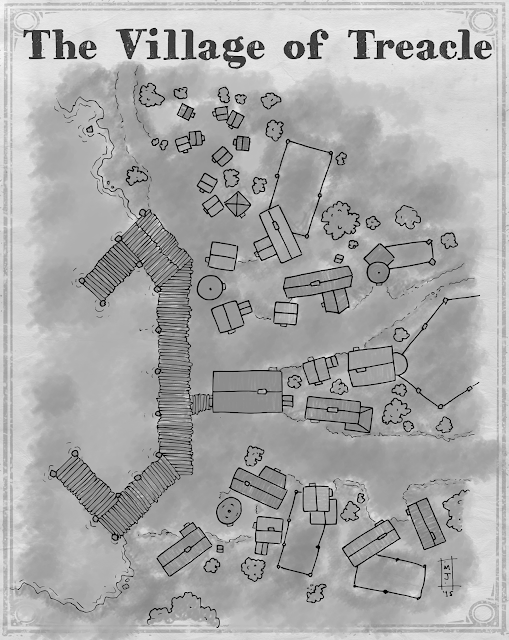 So I was browsing a few blogs I regularly visit and on +Tim Shorts's awesome Gothridge Manor blog I spotted a link to another blog that had an awesome sounding post:

"Deadly PANTS" I thought it read - I was not wearing my glasses at the time. Sadly, the post was not about pants with a penchant for killing. I was momentarily sad that someone had not come up with some deadly pantage, then I said Fuck it! and promptly made some.

God help you if you find yourself wearing one of these. Roll a d6 bitches.

1 - Thorsberg’s Leggings - Thorsberg was a squirrely fella and liked his pants very tight to “Show my manliness to the ladies” he would proudly proclaim. A natural looking codpiece beneath the groin area makes the wearer appear to be very well endowed. He receives a +2 on all rolls when speaking with women so long as his pants are visible. However, after these pants have been worn for a total of one week the wearer will lose all manly ability to perform for said ladies.

2 - Barbarian Breeches - Historically it was believed that only savages wore pants and some fool mage made these pants, we hope in jest. Upon donning these pants the wearer immediate flies into a barbarian-like rage. This lasts for approximately 2d4 rounds or until the pants are forcibly removed. If the wearer is killed while still wearing the pants, his corpse will continue to rage until the effect’s duration is complete.

3 - Braccae - These pants cover the wearer from the waist to just below the knee. If folded nicely each night these pants will self-clean and deodor themselves. If the wearer fails to remove them in the evening and let the pants ‘air out’ the pants will slowly grow tighter. After one day they will be uncomfortable to wear. After two days they will be painful to wear. After three days the legs will begin to bleed through the pants. On the fourth day the pants will become so restrictive that the wearer will not be able to focus on anything but the pain. The fifth day dead will come for the wearer. Once the pants are on, only a wish spell will remove them.

4- Prandler’s Poofy Pantaloons - These appear to be regular, sturdy leather pants. After they have been worn for four hours there is a 1 in six chance per day the pants will suddenly balloon out to a form a round poofy balloon on each leg. These are so large they restrict movement. After two minutes the air inside the pants becomes lighter than air and will lift - feet first - the wearer upward. The pants can lift over 400 pounds and will continue to do so for one full hour. At the conclusion of one hour the pants will suddenly deflate, dropping the wearer from whatever height they have attained in the last hour.

5 - Knickerbockers - Also known in certain circles as Buttkinkickers, these pants appear to be a pair of elegantly made and expensive trousers. For most purposes they are, until they are worn around someone of importance such as a noble, high ranking clergy, or a powerful demon. They then spring to life and take control of the wearer’s lower legs. The pants will seek out the most high-profile or powerful being it can reasonably reach (including performing leaps far beyond normal human capability, up to 100 feet) and begin to violently kick the being, preferably in the arse. The pants will continue to do this until either the pants are removed (by force), the wearer is slain, or the target is killed. If the pants manage to kill the target of its kicking, they will return behaving as pants should.

6 - Hell’s Bells - These overly large-ending pants are plain white, almost blindingly white. Once worn the wearer will immediately long for the sea and being in smelly, small, and cramped rooms with many men. But that is just where the horror starts. Immediately following these strange desires the pants will literally clang out a resounding tone with every step the wearer takes as if the wearer worn massive brass bells upon their legs. This sound is deafening within twenty feet and carries well over two miles, letting all know exactly where the wearer is located.
4 comments:

[adventure] Siege at the Temple of Gorush 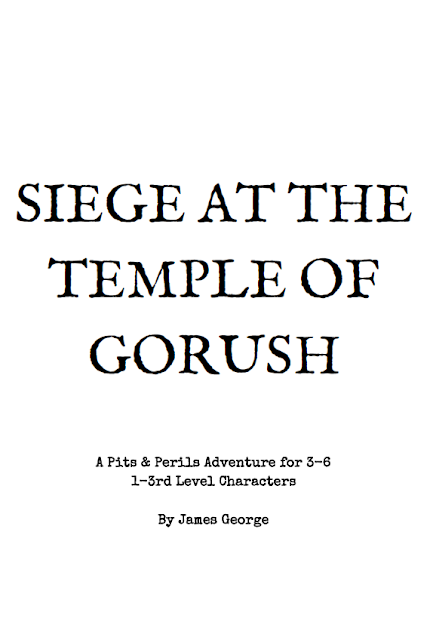 First off, I did not write this one (for those of you lacking in observatory skills and missed the author above). This was written Pits & Perils, one of my favorite rules-lite old school style game, back in the early days of the system being written. It was ran at a convention by the author and not too long ago posted for public use.

Being the fool I am, prefer the digest sized booklets - they are simply easier to take with you for reading while out of the house. If am not taking my tablet, I am taking one of these small booklets wherever I go. You never know when you will get a five minute break in the insanity and want to read something. So I took the adventure James had written and reformatted it for a digest size.

You can read a little history behind this adventure here:
http://pitsperilous.blogspot.com/2015/01/the-temple-of-gorush-pits-perils.html

James was gracious enough to allow me to post this to my own blog. If you enjoy some old school gaming - and even if you have never read Pits & Perils - take a moment and look this over. The adventure is a solid old school adventure.

Oh, and this is my call to arms aimed squarely at +Olde House Rules, where is my digest sized version of the rulebook? Come on!  ;-)
6 comments: