I am behind so I am going to do a quick wrap up of the last two sessions from memory. Wish me luck.

Ep 11. They decided....decision made by Shane's Gordo running into the room to search. A quick search was done and some treasure located before the skeleton's came to life. Unfortunately Gordo met his end in the watery tomb. With the danger out of the way, they explore and uncover significant treasure, enough that they immediately opt to depart and head back to Kalynn. Then on to Bordain (see below).
PC casualties - one, Gordo the thief (Shane)

Ep 12. Halfway to the river out of Kalynn, a massive storm comes over the mountains and vomits a torrent of rain upon the party. Raymando's horse throws a shoe and is unable to carry his weight. Now, their trip is cut short and they will need to slog through flooded trails to reach the village on the banks of the Phoenix River to the south of Kalynn.

They enter the small village and are immediately assaulted by the foul smelling murky pool of mud/water north of town. Some odd looking cow-type creatures are standing in the knee deep mud, slurping the water via their short, elephant-like trunks. With a powerful storm drenching the party, they opt for the first building, the Burnwood Inn. They are greeted by a friendly tall man and served a good meal. Cynemær Warwicke, a tall and strong looking man runs the inn with his wife Ainsley Brighteyes, beautiful elven middle-aged female.

They encounter what appears to be a group of thieves (noted because of the thieves cant signal their leader returned to Raymondo). The only odd thing that occurs is that a centaur comes into the inn for dinner and takes a seat at a nearby table, a seemingly normal event here in Shiteton. They bed for the night, then head out to shop, spend gold, and learn about the new village. 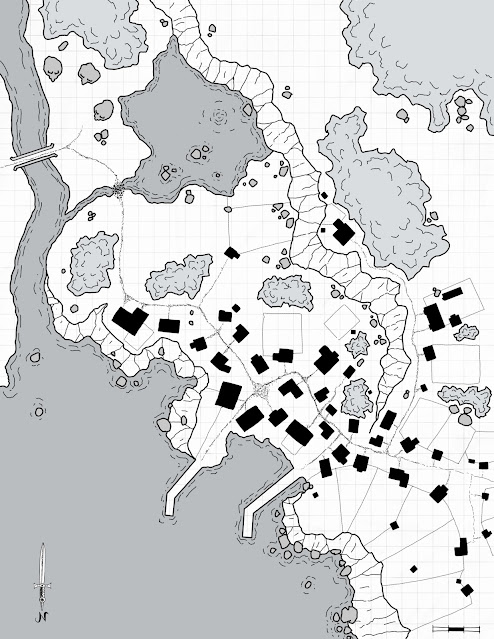 Next door is The Trading Post, a sort of adventurer's general store ran by Hedley Stroude, a thin, animated glasses-wearing human (I believe I used a player at the table to describe him exactly). Full of energy and ready to help purchase and sell goods to the party, he manages to give them decent prices and the party is mostly happy with their dealings with Hedley. As they do this Raymondo heads just down the street to the blacksmith to repair his horses shoe and meets Algar Brickback, a grumpy, unhappy dwarf. While repairing the shoe, he mumbles to himself about a miserable childhood and an unloving father. Next the wander to the Adventurers’ Guildhouse, a sort of local hangout for adventurers. Oddly enough, Dosta, a freaking elf, fluffs his feathers up, strolls up and tries to sound like a badass to some rough looking hirelings and somehow managed an amazing display of bravado, endearing a hireling named Vax Blackrim, and two porters named Artug Bleakmaw, and Bodma Theriem.
PC casualties - none!

I was extremely worried about the new village. I had also jerked the players' chain a bit. At the end of ep 11 they wanted to buy horses and travel cross-country THREE days to Bourdain, I had agreed. Then hopped up on CBD and painkillers, I rolled three or four times to see if they ran into random encounters. Ha! Three or four times?  Get the fock outta here! When I came to my senses a few days later, and the monumental task of fleshing out a CITY hitting me in the forehead, I said F that and created a small village along the way. Thus, Shiteton was born.

I started to draw up a map on Saturday, then finished it Sunday morning. Over the next two days I fleshed it out with people and locations, hoping I would have enough laid down that I would be able to run it smoothly.

Let me just start with I HATE shopping trips to town. They tend to be boring and characters wander about trying to learn as much as possible about the town, never sticking together for long. Players dig for intel about the area, possible new places to explore, new things to buy, hirelings to....hire, etc. It tends to turn into one massive information dump for the DM and making this not suck is usually a difficult chore. Numerous new NPCs to describe, discover, and talk to. Lots of information needs to be prepared before hand, ready to spit out at the players, and more importantly, being ready to toss shit together as players wander off the tracks and dig for oddball information from the village NPCs.  Oddly though, this time it really felt pretty easy. Maybe the players were easy on me, maybe I had prepared just enough, or heck, who knows. It went pretty smoothly and I think everyone had a good time.

The Mound of the Menhir

I drew up a quick map this week during multiple bouts of insomnia. Glory to the Lord of Stress. I imagine The outer menhirs floating in patterns, slowly circulating around the central stone. Why? That's for you to discover. 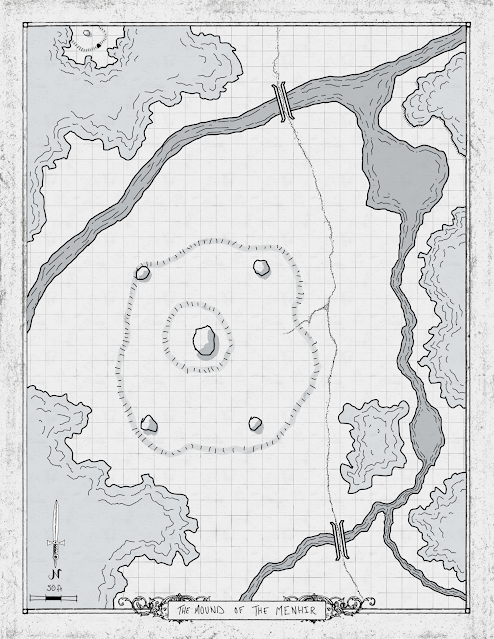 Ok, I need a hand. So life sucks amiright? Well, my buddy Christian has been making this really cool setting, a single page at a time for his post-apocalypse death world called Gath. You can check it out at his blog Destination Unknown.

I got this nutty idea today that we need him to turn this into a hex crawl, a la The Dark of Hot Springs Island. Seriously, if you don't know what that is, take a moment and educate yourself.

Anyway, today I played around with a hexmap to get him started. Now, I need your help. We need to make him do this. Harass him. Bug him. Send skellies and mutants! We world can only get better with a Legends of Gath hexcrawl! 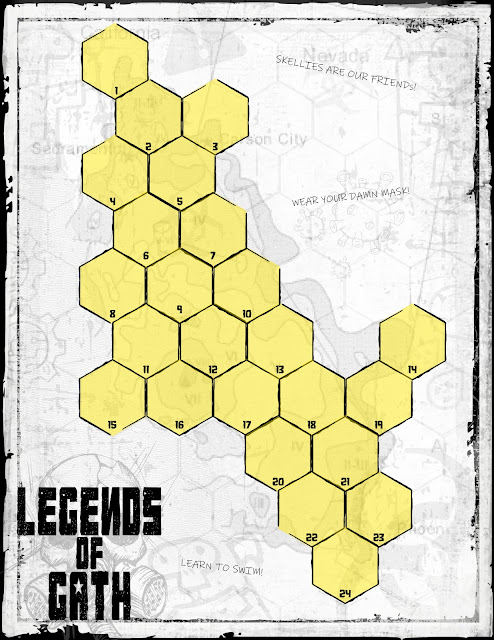 I am behind now two weeks in updating the game sessions (though in honestly, they draw little visits to the site, so I may just stop doing them anyway) but I like to share the maps I am working on for my game. I have enjoyed the style used by Glynn Seal of Monkeyblood Design for use in the Midderlands products. For me it is quick, forgiving, and easy to throw a map together, I think this took shape over a few hours on Saturday and Sunday last week. If you like this style, I encourage you to check out the Handy Maps product from MB Design.

Shiteton (yes pronounced just like it looks) is so named because of the large, smelly, sulfur-spring feed muddy pool to the north of the little port village. I am not going to go into the details for this village as my players are just starting to explore the busy port.

While small and of only a handful of buildings (the area east of the village is cluttered with dozens of farms), this is quite populous, busy, and a major hub of industry and commerce. The village sits along the northern coast of Goblin Head Lake, just south of the Troll Mountains, an area rich in ruins, caverns, barrows, and an adventurer's paradise. Additionally, the village has a couple large and well-known merchant companies located here. They offer explorers the opportunity to sell off larger than to be expected quantities of treasure than one would guess given the small size. 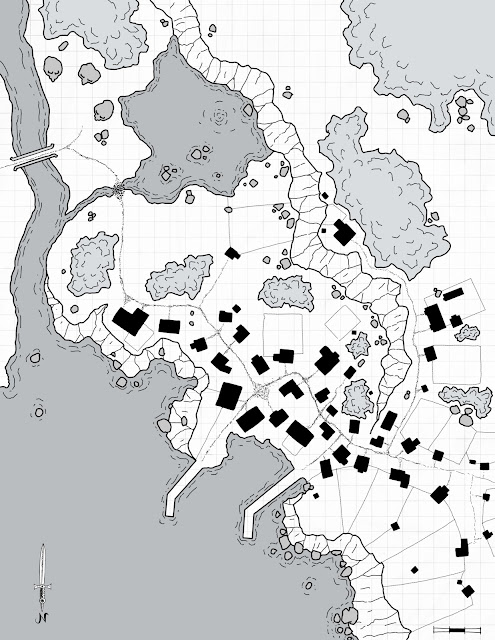 Anywho, I hope you like the map and perhaps in the coming weeks we will see me posting more details and fleshing out the village as my players explore it. Take care!