A friend or two alerted me to the Free Kriegsspiel Revolution this last year and I have given it a fair reading a few times. While it never jumped out at me as exceptionally interesting, something keeps itching at the back of my brain regarding FKR. Last year I even delved into the murkiness of the Arnesonian playstyle and wrote my own version of early-play D&D and spoke frequently with my buddy Norbert about that early play style. I think some of that discussion was the forbearer to Norbert creating the FKR play style.

If you are not familiar you can check out Norbert's blog for far, far more details here: http://darkwormcolt.blogspot.com/ but in my amateur opinion it boils down to this:

Only roll the dice to determine an outcome if you cannot do this using good judgement.

Like I said, this has been rolling around in my brain and last night I was reading some FKR stuff about using dice versus not using dice. I found it quite interesting. I woke up this morning with this thought dancing around my brain.

As players, myself included, we would rather leave the story up to random dice than an impartial game master. We accept that some things will happen that are very unlikely to happen, rather than having an impartial GM who would arbitrate the outcome using logic.

Why is that? We have modifiers to the results through attributes, levels, and gear but in the end we allow the dice to completely and arbitrarily determine the results. Seriously, think about it.

A third level fighter is fighting a single goblin. Player rolls a 1 and the fight goes from a simple thing that the fighter should easily succeed at, to suddenly he lops of his leg/breaks his sword/guts the cleric nearby (again, likely determined by another random roll on a Critical Fumble table). Stepping back and looking at this from a not-in-the-moment viewpoint, if you came across this in a novel or your favorite TV show, I bet you would groan about how silly that was. Here though, we accept it. Why??

Now, a friend of mine would say the following:
1) It adds a level of fun, chaos, interesting and unexpected outcomes.
2) As a GM I have the power to limit that amount of silliness in my game.

I would agree on both these statements. I too enjoy the silliness that results from Tim rolling three "1"s in a row and lopping of Joe's ear, breaking his magical crowbar+2, and setting his hireling on fire. This is hilarious and fun all at the same time. Also correctly, you are right, as the GM I have the innate power to control those aspects of the game, choosing to roll only when I want and deciding when I want to allow the dice to determine the results*.

Anyway, just some thoughts I felt I needed to put down on digital paper and get out of my head this morning.

*As a side note, I would add that as a GM I have often 'rolled the dice' behind the screen and ignored the result, deciding before I roll the outcome and simply narrating the result as I saw fit at the time. Usually this is because of story elements or plot development that I am working on for the larger campaign. 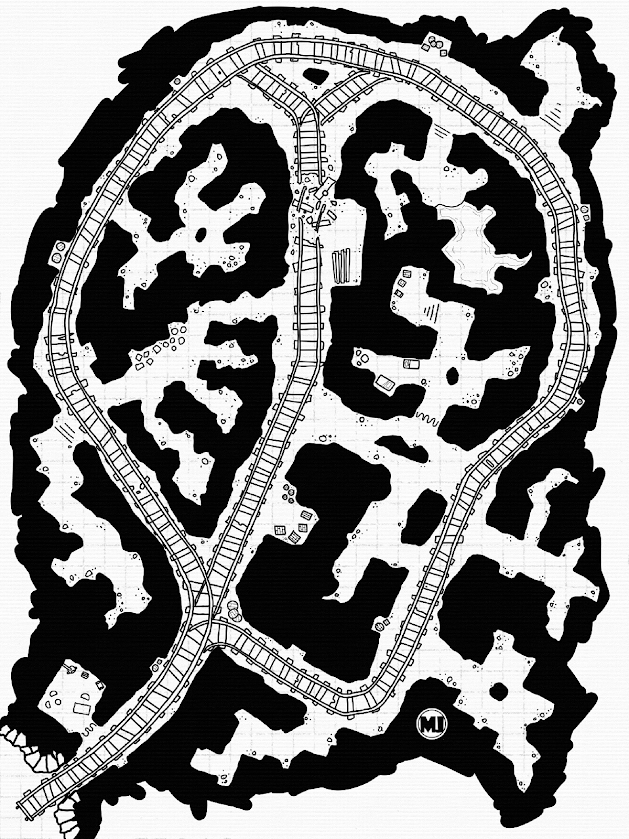 The mines were abandoned decades ago and since that time various groups have moved and claimed the tunnels as theirs. Some come to work the mines, some did not.
Today, various factions control separate parts of the mine and fight to hold on to what they 'own'. Sometimes alliances are made of broken, some slink through the shadows in hopes of rich on the gems hidden in the rock, others simply trying to stay hidden from whatever sent them into this frightful place, others hoping the gems can make them wealthy and powerful. 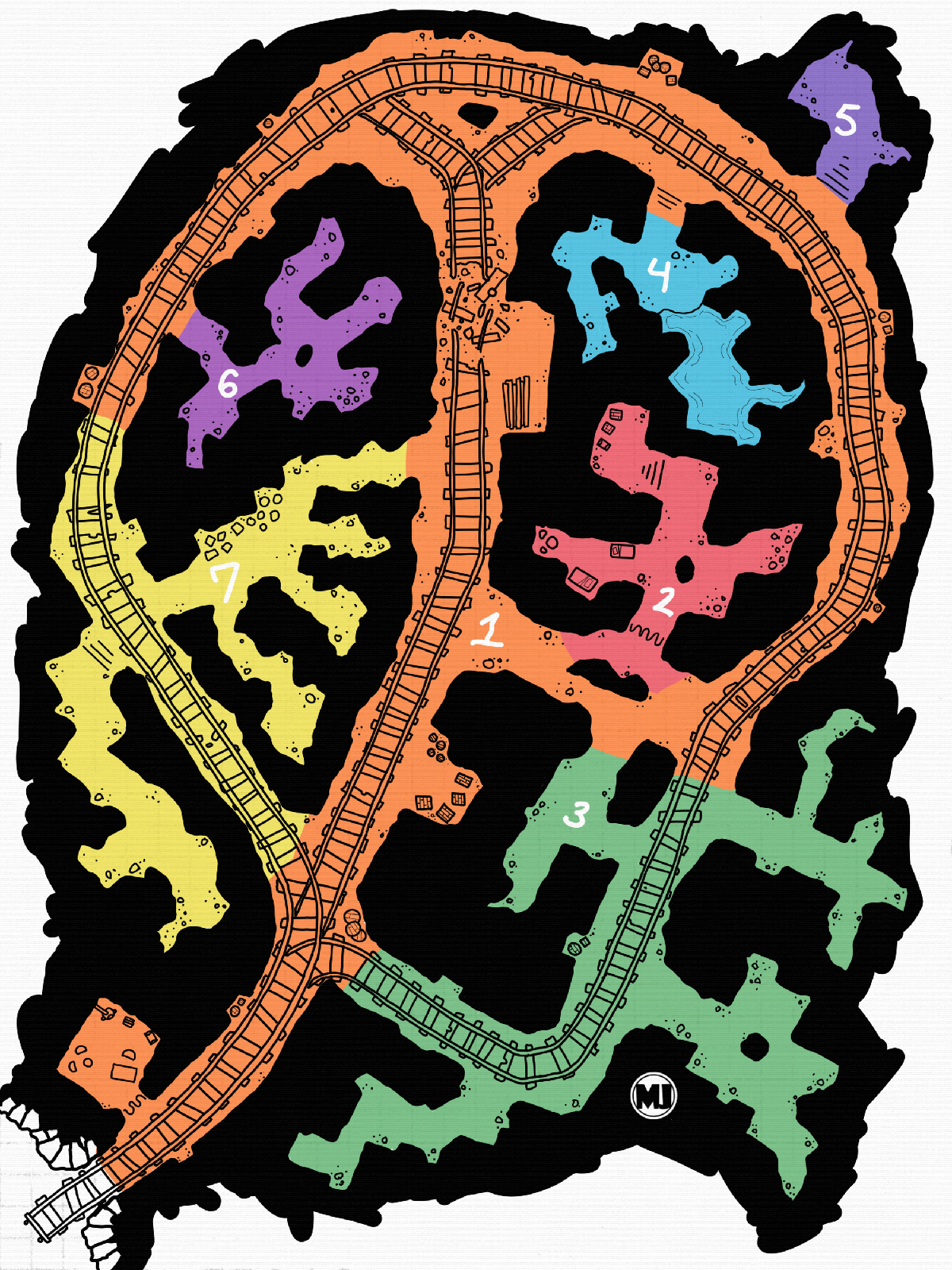 AREA OF CONTROL/ENCOUNTER AREA
1- open area/contested, any faction may be encountered here
2- Jango "Dead eye" Darvil and his gang, holed up and storing their stolen plunder in this section, they are currently in a fragile truce with the spiders
3- Xavtheenix the spider queen raises her brood and plans her return to outer planes, the mushrooms have....done things to them
4- Illyana the water spirit and her twin sister Ayllaya spend their time desperately searching for the Arragean Pearl which she believes was lost in the rocks in the bottom of this pool, they will 'insist' any male visitors assist them in their search
5- Mervin Quentin Beauregard Farnsworth III, a rare gnomish druid, hides here from those seeking him for crimes against nature, his magical nature and overflowing magical vermicitude has caused glowing mushrooms to blossom through the mine
6- Bento Happlestep, a brave halfling explorer has been secretly sneaking in and mining to great wealth, he keeps the other factions away by frightening them with illusions from a magical wand, he is terrified of the mutated spiders he has encountered
7- The ogre Bloodfinger Tribe has moved in and began mining, Ovilax Skullsitter sees the gems as a way for him to secure the ogrish throne for himself, he recently snacked on a mushroom which doubled his strength
The mines are quite notorious for their resplendantly abundant gems and crystals. Another well known fact that the rock here is full of the dangerous ore known as rhydonium. Anyone spending the time to mine (with proper equipment) has a 2 in 12 chance (2d6) per turn of discovering a valuable gem or mineral. On a roll that results in doubles however, rhydonium is discovered and immediately and violently discharges, causing d6 damage to all within ten feet of the miner.  The miner takes double this damage.
If ore is discovered, consult the table below. First roll for ore discovered, then roll to determine the quality of the deposit. Take the core ore value and multiply by the listed quality modifier. How large this ore is I leave up to the DM.
ORE DISCOVERED
2-4: Silver, value 1gp
5-6: Electrum, 3gp
7: Gold, 5gp
8: Blue quartz, 10gp
9: Red Garnett, 20gp
10: Rock Crystal, 40gp
11: Diamond, 10gp
12: Viz, 500gp
ORE QUALITY
2-5: Poor, x1
6-8: Fair, x2
9-10: Good, x4
11: Superior, x10
12: Majestic, x50
The mushrooms and their effects I leave to you. Enjoy.
3 comments: 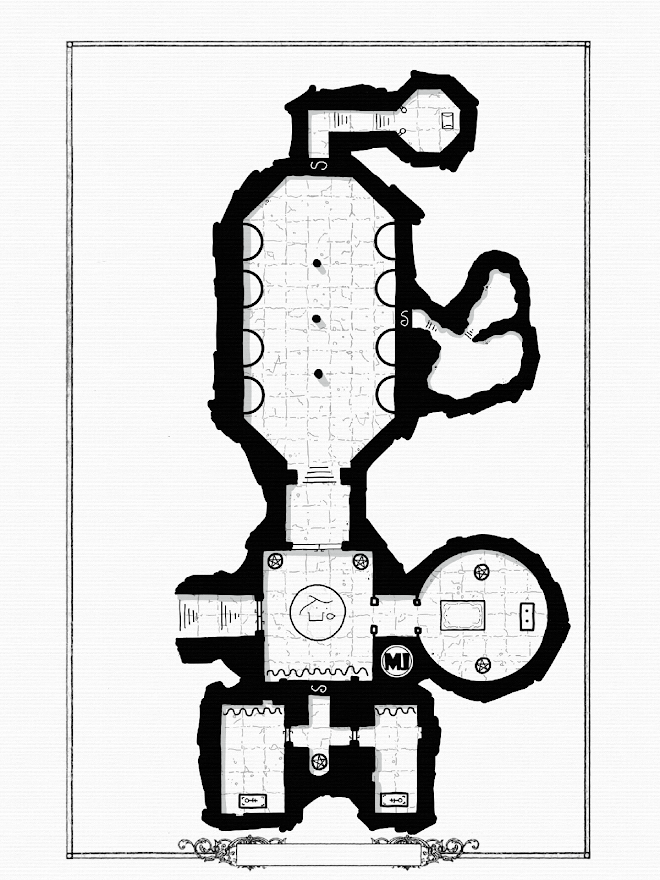 Yesterday my buddy Steve shared a map he drew on the whiteboard in his office (which is funny in and of itself because he's like the head dude at a big factory) with us. I asked if I could redraw it, which my group immediately codified by saying I was going to Jacksonize the map. So, here you go!
5 comments: 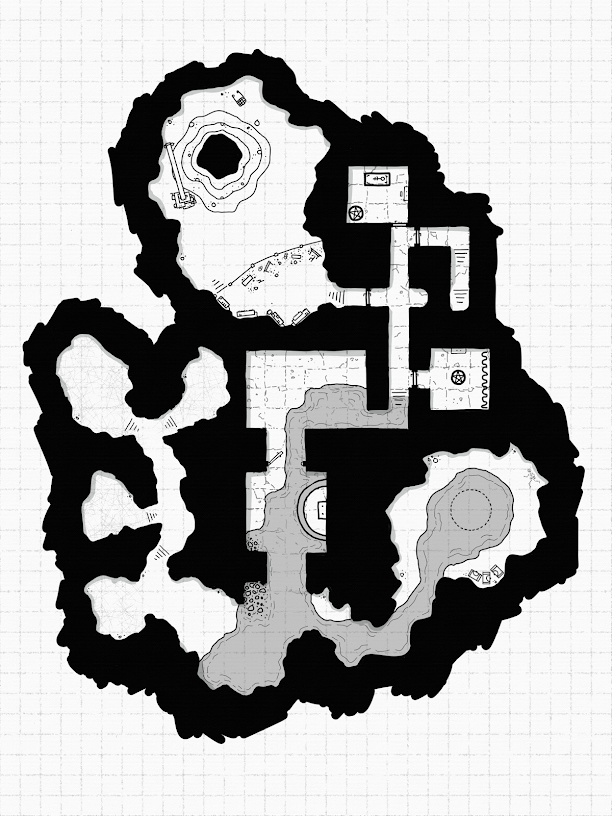 A fairly simple map, but one I feel could keep a party of adventurers busy for the better part of two to three sessions. And, more importantly, where does that pit lead to........?
13 comments: