I'm about to head out for a week to visit our capital and see our daughter but I want to pass along one last parting map. I made this in about five minutes at work yesterday while waiting for a meeting to get started. I cleaned it up slightly last night, figured I would post it here.

This small pub is tucked away in the Market District in Bethmoora and, though small and often crowded, is a well known watering hole for those looking for a commission into the Pit. 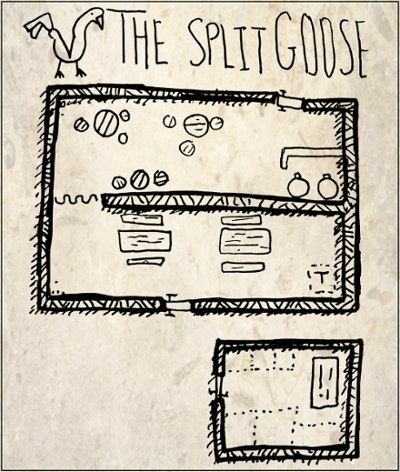 Thought you might enjoy a work in progress shot. 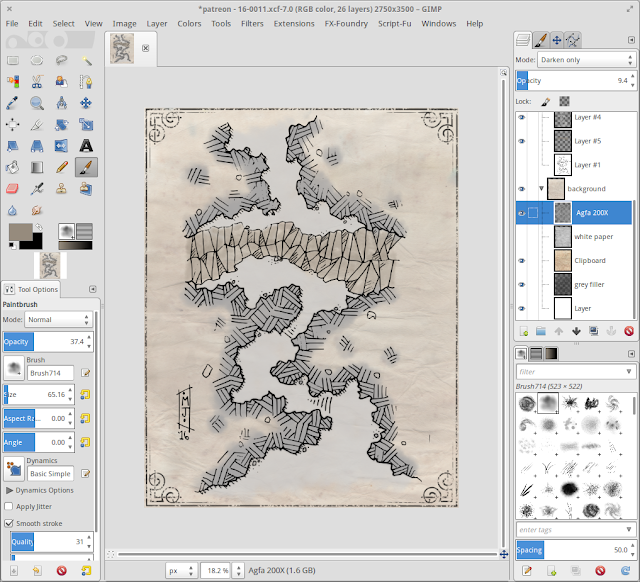 The shot above was taken as I was working on the latest map for Patreon tonight. If you dig the map and would like to see more, please check out my Patreon page. Almost all maps are posted with a handful of variations.
No comments:

The Seven Needles are slim metal needles about two inches long. Finely crafted, these will give off a slight aura of magic to those able to detect that sort of thing. Each of these needles are enchanted with an old magic and said to have been created by an old woman who wanted to feel young again. These are very rare.

To utilize the enchantment, first the user must thread the needle, any simple string will do. Next the string must be sewn into the flesh of the intended target. Once the thread has been sewn into the flesh and tied off, the magical enchantment will be transferred from the needle to the thread and the spell is complete. The difficulty lies in the fact that the needles are not marked and thus the target has no idea the effect until the sewing has been completed. Effects of the string last about twenty-four hours. At that point the string must be removed or the target will begin to suffer a 1 hp loss per day as the string attempts begins to rot in the body.

Needles are commonly found in packs of three needles but it is possible to discover the complete set of seven. Needles are reusable but string is not.

I wanted a map of the lands immediately surrounding Bethmoora, I feel this helps ground the location for players, or at least for me. Not exactly happy with it (am I ever) as I played around with the perspective a little, the Pit, Ghorl Nigral, looked a little weird the way I drew it on paper, so I redid it digitally and well, it looks weird. Oh well. 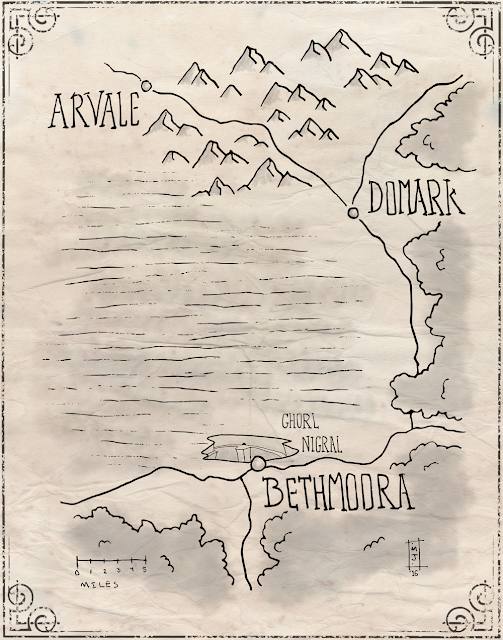 All I can say right now is the area between Ghorl Nigral and Arvale - the Frozen Steppes - The Great White Apes roam this region, hunting packs to fill their bellies.

Yes, those White apes.
No comments:

Yes, that damned city and I have a checkered past, but I am determined to explore its twisting, dirty alleys and document all I see for you.

I have decided I am going to run a Play by Post using Basic Fantasy RPG and in my search for a setting to run the game I came across a few that I liked but something was just missing. Somehow I came back to Bethmoora, and here we go again. I am hoping that by running the game, especially given how slow a PbP can progress, will keep me creating and interested in exploring all of Bethmoora and her Pit.

As the game will begin, and likely visit on a regular basis, I thought it prudent to flesh out the city in a little more detail than we have seen previously. 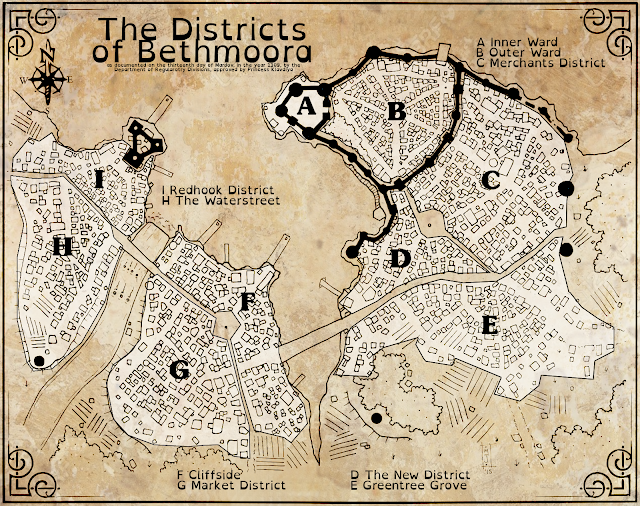 It is my aim to begin fleshing each of these districts of the city in bits and pieces as they come up in the game, or as they come to me. With any luck the group will enter the Pit in quick fashion and we will begin to explore the mysteries hidden in her depths. Second to the right, and straight on till morning, my friends!
5 comments:

The Broken Ruins of Mythgrot

I was in a meeting, got bored, and drew a map when no one was looking. This is the result.

Uthgar, the giant bow shooting goblin makes his home in the Broken Ruins of Mythgrot. He is a sad, foul creature who does not appreciate company, even those bearing gifts.﻿

Uthgar is an unhappy asshole and generally is annoyed by anything that smells better than he. At the first whiff of anyone near his home he will sneak out and attempt to strike them with his bow. If a a pretty little elf is in the group he can smell them at four times the normal range.

Due to the height of the ruins, he will strike without warning from afar, only on a 1 in 6 will anyone - even the fucking elf - notice him climbing atop the tower to ready his attack. This magical bow can reach twice as far as a normal bow and anytime he rolls five or more than the target's AC he pins the target to the ground with the giant, five foot long arrows. Targets may spend two turns freeing themselves from the pinned arrow, each round suffering an additional d4 of damage.

If he manages to slay an elf and appears to be losing the battle, he will grab the elf's body and make a run for it. With his height and great stride he will easily outrun all characters. If the party is determined to track him down, they will find him 3d6 miles away, sitting around a large fire and eating a hearty dinner of roast elf.

Full size versions of the map can be downloaded from my Patreon page here.
3 comments: