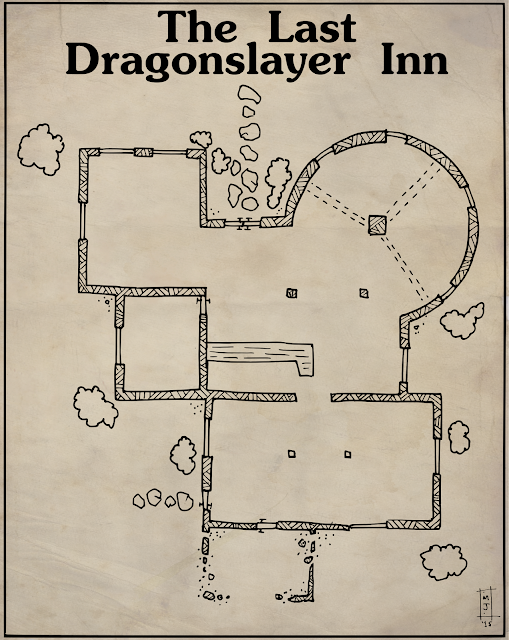 This map was actually drawn weeks ago and I just today got around to scanning and cleaning the map up. A simple tavern, but really, who can have enough taverns?


The Last Dragonslayer Inn was built as a retirement opportunity for a gentleman adventurer named Gregor Thornbottom after he had slain what he believed to be the last free ranging dragon (not counting, of course, the free ranging dragons of Port O'Mardoun and their many colorful dragons). Sadly Gregor lived only a year after the inn was completed.

The previously unknown tribe of white dragons led by an ancient and large creature by the name Marzoulabatozz appeared and quickly surrounded the inn. After discovering that the forty foot tall rotunda at the front of the inn could sustain his considerable weight, Marzoulabatozz was marvelled by the exquisitely designed building and spared the inn. Gregor was another story however and Marzoulabatozz quickly swallowed the old chap up. In a loud boisterous voice he proclaim the inn was under his protection so long as no person ever claimed the title of dragonslayer. Thus the inn has stood for well over one-hundred and eighty years now, serving up delicious suppers and lagers of high quality.

Today the fine and well known establishment is managed by Lady Gerntuber (not royality, she just likes how it sounds). She runs a tidy but friendly inn with well portioned plates and ample mugs of ale and lagers to suit the most picky of customers. The sword and javelin of the late Gregor still adorn the wall behind the bar though they be covered with a thick layer of dust.

Twenty years ago Marzoulabatozz pain the inn a visit, proclaiming he was on his Death Flight, that being the last flight before he was to pass to the Golden Pastures Beyond. Impressed by Lady Gerntuber he immediately tore a large canine from his jaw and asked her to prominently display impressive tooth. Today the giant tooth hangs from the ceiling in the rotunda thirty feet above the floor. Visitors often swing by the inn simply to ooh and aah over the tooth, they promptly end up purchasing a meal and a souvenir or two. The most popular being the Mini-Pak backpack shaped like the large white tooth.

A few variations on the map: 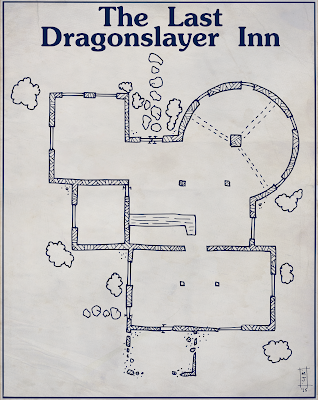 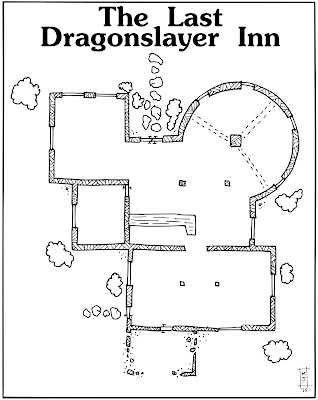