I started running a new game last week using Old School Essentials (OSE), figured I might post about the game here and there. This session was the first and so a good amount of exposition on my part and most chatter between players and NPCs. All the characters are first level and coming this way for various personal reasons, we assumed they became acquainted prior to boarding the boat (because that is usually some boring as fuck role-playing).

CHARACTERS
H'Qha (Steve) - a half-orc, sent here by others but interested in the possibility that his background is somehow tied to this place
Seemorph (Joe) - an elven ranger, he's got a think for ruins and the talk on the coast was this place had ruins....and lots of treasure
Mitrum (Tim) - human cleric of the ancient god Moloch, a deity most noted for being pro-child sacrifice, he has heard rumors of ruins near Scaldwater Bay that might be related to Moloch

SESSION ONE
ABOARD THE BOAT
We joined the group a few days after they left a large port city known as Longshank Bottoms, a city on the western shores of The Kingdom. The trip from Longshanks to Scaldwater Bay typically take four to six days, depending on the severity of the storms along the way. They hit a strong storm on the second day, which pushed the trip to a full five days, most of the trip spent below deck to be out of the strong, biting winds and the cold rain.

We discussed a few tidbits of information they learned while speaking with the crew (some of this information was given to players in the form of a pre-game handout to seed character knowledge of the area prior to the game):

A CORPSE
When their boats arrives and they are about to leave, H'Qha realized the person next to him, some adventurer, has died in the night. He quickly removed a satchel and a dagger from the corpse. He would later open this to discover a map (to an area south of the hamlet, along the coast, with a large red X) and a small vial with four clear, marble-like objects. Inside the marbles appear to be liquid of some sort with small shiny flecks that float around when the marble-like objects are shaken. 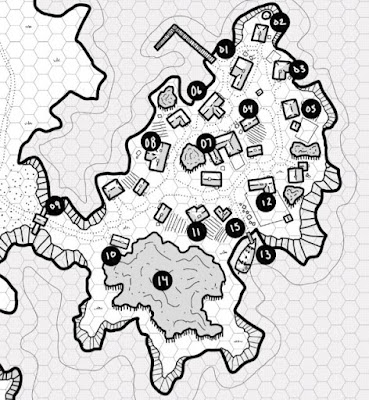 The character disembarked, grumbling about the heavy rains. Moving uphill to a covered area outside the Weary Wench (1 on the map), they encountered a few important people from town: Stavos, Tamalaud Breig, and Sheriff Rolloc. The Sheriff gave them a quick once-over, rolled his eyes, and uttered under his breath "Adventurers..." Tam is a little more friendly and introduces himself as Lord Bertolucci's man in the wilds here, he purchases treasures the adventurous recover, sell adventuring gear, and can order special equipment from the mainland. Stavos invites the party into the Weary Wench, offers a free, welcoming, drink and provides wonderful clam chowder.

As they eat and talk, two people enter, Bronn Tussle and his teenage son Galan. Bronn is clearly half-orc and politely nods to H'Qha. Steve has H'Qha make a secret half-orc 'gang' symbol....which we all discovered looks exactly like 'The Shocker'. Hilarity ensues and the table laughs uncontrollably. - GM note: I am sure this will become a long-lived thing in the campaign now. - Bronn speaks with Tam and Tam make a suggestion to the party. If they are wanting to get started immediately, Bronn is headed out to a natural orchard a couple of miles west, and more importantly inland from the hamlet. He has a covered wagon and could transport the party out a few miles while allowing them to stay dry...plus having a few swords on hand in case they run into trouble would not hurt either.
The group agrees and we had to end it for the night.