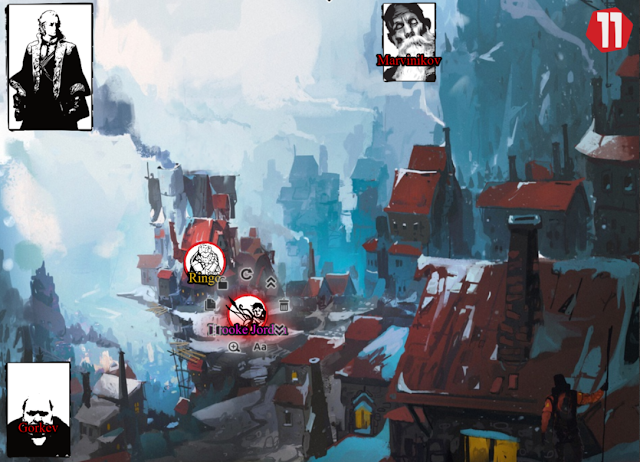 I wanted to run another ICRPG adventure, this time falling back to fantasy simply because I know the genre so well, I knew it would be a good measure of how I felt about the  system and if I felt I could run many games using it. Thus, I began my search for good concept art for the adventure I had in mind: a dark force has befallen a small, frozen village called Iceton. Many heroes have gone forth to solve this puzzle but none have returned and now the mayor is desperate, sending out word that he will pay well for a solution to be found!

Our intrepid heroes ventured to the small village perched on the edge of a steep mountain cliff (check out that artwork!) and made there way across the snow to the largest building. The building sat perched out a think outcropping of stone, just before a large keep.

They entered what ended up being a large but run down pub (I quickly decided to add a scene here and grabbed a random tavern piece of art, ended up being for a pirate setting! Haha! I decided to roll with it.) Inside they met a Kitt named Reek manning the bar (from the Warp Shell setting but I think they are cool), a small ferret-like creature. He uses 2x4s nailed down haphazardly to navigate around the human sized bar and serve drinks. The players laughed a little so I think they enjoyed interacting with Reek. After some friendly banter, and generous payment, the small bartender suggested they speak to an old man named Rolfe rather than speak to the mayor directly. They secured a guide in the form of a young hearty ranger named Gwenvold, she would take them to The Tomb of Ergot, the place Rolfe believed the evil was emanating from. Rolfe also suggested they visit a local seer named Marvinikov. Unbeknownst to the two adventurers, they were being sized up and their true nature being weighed by the old man and the seer. Found to be worthy, the seer provided them with clues to how to defeat the dark forces in the tomb. "Seek the eyes of Ergot, the eyes are the secret; Only the flames can close them; Without his eyes he has no sight and thus ends his doom!"

This meeting with Rolfe later proved to be pivotal as the mayor was later revealed to have been in league with  dark forces and was sending men to die for their souls to feed this unknown dark forces.

Soon, the trio headed out on the wind-blasted ice and snow, hours later  coming to a frozen waterfall that must be climbed. Here I used a timer as well as the effort mechanic to track each man's climb up the wall. They had secured ice-picks in Iceton so they were able to use the Tool effort die. As the timer wound down, a large bear appeared atop the waterfall, momentarily freezing the men in their precarious position on the ice, but the creature quickly grew bored and wandered away.

Moments later the trio were able to finish their climb, only to discover that the one bear had become two! A large mother and her cub now watched the three as they scrambled off towards the tomb. The tomb door was solidly closed and would require another 1 Heart effort to open, unfortunately the bears were hot on their trail! Some quick thinking on Brooke's part saved them. As he approached the stairs, he tore up a trail ration and spread it along the trail, then continued to help his friends open then large stone door. The hungry bears could not pass up the yummy trail rations of dried fruits and nuts and gave the PCs enough time to safely enter the tomb and close the door behind them. 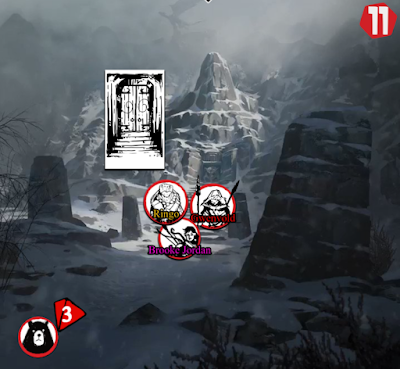 Next, they entered a cold, gloomy tomb, but unlike one they had experienced before.  A frozen path led to a steep stairway down to a thin path that wound around in the bluish gloom. Over them stood a large and imposing face carved into the very rock! Embedded in it's sockets were glowing blue gems! The path was covered in ice and slick, requiring DEX checks to keep on the path. Multiple failed attempts left the PCs down some hits (-1 per slip from falling, then slamming into the cold rock walls below the path when their ropes saved them). Eventually, some good rolls got them up to the eyes and they melted the ice holding the gems in place. The  PCs attempted to burn the gems, hoping this was the flame the seer spoke of but the fire had no effect. They decided to push on deeper into the tomb in hopes of finding a clue to end the dark cloud over Iceton. Continuing down the path, they then came to the final area: 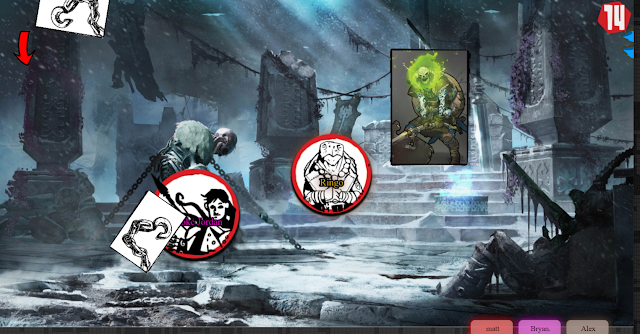 A chamber stood before them, the roof open to the elements, soft snow floating down onto the scene before them. A huge  skeleton kneeled before a raised throne, large chains pinning him to the ground. On the throne sat a massive skeleton, a heaty axe splitting its skull. Before the throne sat two braziers, blue flames blazing high. The PCs acted quickly but not fast enough.
Ringo burst forward as chains erupted from the floor, narrowly missing him. Brooke was not as lucky and a chain ripped into his leg, halting his progress. Ringo continued forward and was able to toss a gem into one of the braziers. A jet of flame shoots skyward, blasting Ringo with ice cold air. The skeleton on the throne stood and removed the ax from his head, roared at Ringo's insolence. Brooke tried to toss his gem to Ringo but the toss went wild!
Dodging another chain, Ringo was able to rush and pick up the gem while Brooke distracted the giant skeleton lord with a crossbow attack. With a lucky initiative roll, the pair was able to toss the last gem into the fire and the giant crumbled into a pile of bones at the bottom of the stairs! Fate had smiled upon them this day!
Thoughts. . . . . .
I was really impressed with ICRPG in play. As a GM, I was able to create this full adventure in very little time, even making major changes to the scenario moments before the players began a scene. A perfect example is the scene with the large face. I had performed a search for just the right piece of art numerous times and until moments before our session started I had been unable locate just the right piece. I was able to drop it into the Runehammer VTT and quickly work up how the scene would work just as the players were opening the front door to the tomb!
We had some discussion following the game regarding if ICRPG would work for a longer campaign, if we thought it would work or not with how progression is handled. I did a little digging on the forum and some solidly good points were brought up. I think I am going to see if the players want to continue adventuring with these characters, I will likely be adding some elements alien to ICRPG and more akin to OSR games like resource management like rations, gold coins (for purchasing things), and increase the focus a little more on exploration/hexcrawl type things.
We will see where this goes....