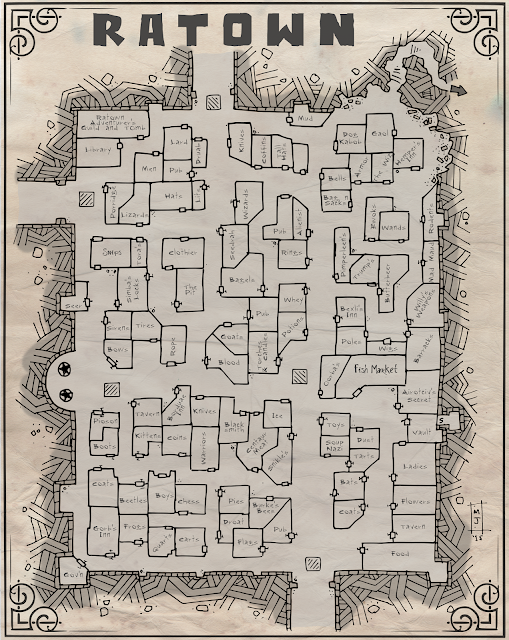 As a long time DM I have often found that images and maps can be great as tools at the table to help get a location's feeling or atmosphere across to players, BUT I have also found those same thing to be fountains of inspiration for the stumped DM. That's where this piece is coming from. I created this map to be used but also to hopefully inspire. My hope is that a DM would be using this map and get inspired by the hints on the map to flesh out the underground market known as Ratown.

Each business in Ratown has a small hint at at what might be inside - a name or perhaps what is sold inside. My hope is that this will spark a creative idea in the DM and help them create unique locations and inhabitants of Ratown for players to visit.

Let's give it a try.

Near the middle is a location with the term "Bagels" on it. Now, while I might like bread just as much as the next guy, bagels are not my favorite bread product (barely nudging out croissant, that evil doughy thing from France). That means I would likely steer clear of this being a bakery that specializes in bagels...what if the owner is named Bagel instead?

Bagel's Olde Wood Shoppe -
Bagel (pronounced bah-ghel) is white-bearded gnome that shares his race's affinity for pointed hats, in his case a blue one. He is most often found wearing sturdy - and dirty - coveralls and a belt with many pockets. Bagel is a serious and hard worker with a specialization in woodwork. With his natural ability in magic and his god-given skill in woodworking he has mastered the skill of wand and staff making, providing a wide variety of each.

Bagel's Shoppe is dusty and tight. The store is divided into two sections with the front being essentially a hallway that runs between the two doors. This section is full - from floor to ceiling - with small boxes of wands stacked upon each other and small barrels choked full of staves. There are so many to choose from that a visitor will feel a little overwhelmed when they enter. This is actually a ward that Bagel has cast upon the entryway. Moments after entering the shop Bagel will appear from the back and wave off the ward's effects.

The back section of the shoppe is Bagel's workshop and is full of stacks of wood and a large bench covered in the various tools Bagel uses to create his masterpieces. This area is exceedingly dusty and will cause anyone entering to begin suffering complications. These will include coughing, itching and watering eyes, and a general feeling of discomfort from the dust-filled air. This is caused by another ward being placed upon the area.

All of Bagel's products are sold ready to accept any magic placed upon them and are inherently magical due to charms and wards he places upon each when he is finished working his craft. Thus, simply owning one will afford the user a +1 to any single roll each day (player picks). 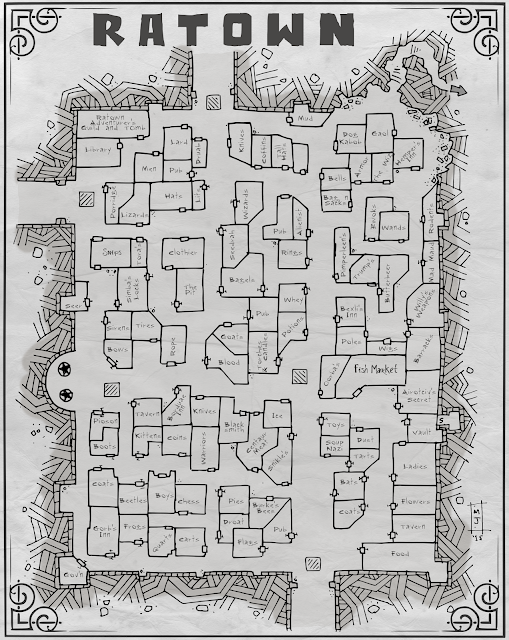