Continuing the evolution of the so1um solo RPG system, click here for the updated ruleset, so1um 0.2.

And now, on to my playtest with these rules (please note that some rules changed or were tweaked during this playtest so it is possible that some steps in the adventure do not marry up exactly with the final rules posted above). Questions I asked the system are in italics and green, while the answers or die rolls are provided in Bold, hopefully this helps make the process moreclear. 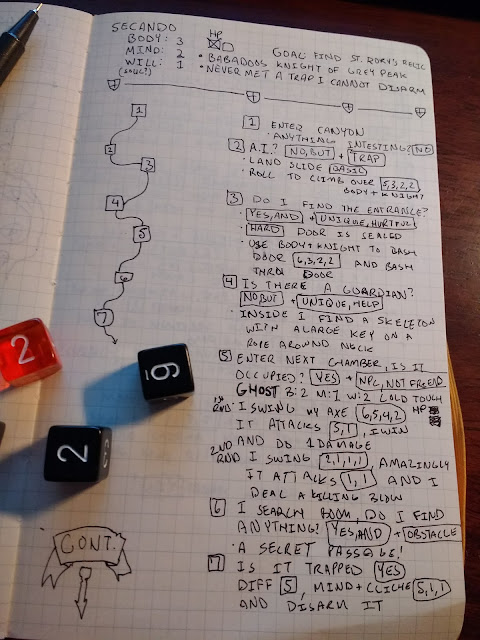 (1) Secando enters the canyon where St Rory's Tomb is said to be located. Does he find anything interesting? No. Secando continues farther into the canyon.

(2) Deeper into the canyon, I ask again. Does he find anything interesting? No, but. + Obstacle In this case, a land slide has made passage treacherous, with a difficulty of Basic. I roll to overcome, using Body + Knight cliche and get 5,3,2,2, enough to overcome the Basic (later changed to Simple) difficulty. Secando scrambles over the landslide debris and manages to locate the trail he was following.

(3) Continuing his search, I ask Does he find the entrance to the tomb? Yes, And. +  A unique feature or situation, Hurtful. A door is sealed with a Hard difficulty to break it down. I use Body + Knight cliche to attempt to bash it down, getting 6,3,2,2 and manage to crash through the door.

(4) I ask Is there a guardian? No, But +  A unique feature or situation, Helpful.  Just inside the tomb I find the skeletal remains of a previous visitor, complete with a large skeleton key on a necklace around it's neck. Perhaps this will come in handy later.

(5) Continuing to the chamber, I ask Is this chamber occupied? Yes + NPC (not friendly). A Ghost swings down from the ceiling and attacks, defending her home! (I decided to make this NPC more of a monster on the fly as it made more sense than an NPC just standing around behind the sealed door waiting for a visitor.) I quickly throw together some stats for a ghost, using the random method provided for generating characters.

I get Ghost B2 M1 W2 HP☐☐ Cold touch. Secando swings his ax, using Body + Knight cliche and gets  6,5,4,2 while the Ghost attacks and gets 5,1. Secando wins this round, dealing 1HP with of damage to the Ghost. For the second round of combat, I roll terrible with  2,1,1,1  and amazingly the Ghost rolls 1,1, Secando deals the death blow to the Ghost!

(7) Secando searches the room, Does he find anything while searching the room? Yes, And + Obstacle, Secando discovers a secret door! Is the secret door trapped? Yes, with a difficulty of Tricky - 5. Trying to figure out the trap, Secando rolls his Mind + Trap cliche and rolls 5,1,1 and manages to disarm the trap!

We will continue Secando's adventure tomorrow!
Posted by matt