Inspired by some recent play reports on another blog I have decided to begin recording the adventures I am running for my regular Thursday group. The group is partially the same group I have been DMing with for over a decade now and three newer players to join us. I am calling this session one but in reality this group has been together since November and probably at around 15 sessions played over the months.

Recap of our previous adventures.
(a super fast and short overview of our adventures thus far)
The group originally came to the frontier village of Prolge in search of fame and fortune, they rescued some children from a cult of fishmen in a largely unexplored dungeon to the north. They got caught up in a 'civil war' between fishman tribes. They then heard of an ancient elven ruin to the east called The Citadel of Sorrow where they discovered a obelisk with teleportation capabilities, on this was marked a symbol of a tree. Later they encountered a seriously dangerous demon called Demodrix who was partially trapped in a demiplane with powerful chains.
Shortly afterword they rescued a local lord from the clutches of a strangely powerful goblin tribe called the Bludfingers and captured two black spears from them. With some help from a librarian and a bit of facetiming, they uncovered that they black spears were the corrupted White Spears that trapped Demodrix in his prison, the corrupted spears could set him free. The party determined that they should 'uncorrupt' the spears to ensure he is not freed from his prison. To do this, they need to locate a Weirwood tree and stab the spear into the heart of the tree (thus removing the curse that made it a black spear). Unfortunately Weirwood trees are rare and the only known remaining location is an ancient elven homeland. Curiously the teleportation portal in the Citadel of Sorrow had the symbol of the Weirwood tree, deducing this was a portal to the elven homeland, the party is determined to travel through the portal and locate the remaining Weirwood trees...

After resting up for a few days and allowing Aetius the mage to create his wizard staff, the crew reassembles in Prolge with Lord Groften (the aforementioned local lord). Lord Groften informs the group that he has assembled twenty of his men to help escort the party to the Citadel of Sorrow safely. The decide to head out the following morning. 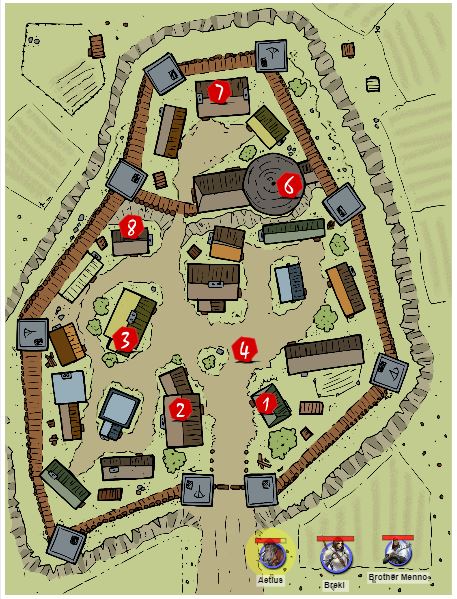 The party stops in and visits with a local vendor named Maelken, a proprietor of potions, salves, elixirs and whatever oddities he happens to have at the time. They procure a handful of potions that give a person more vigor and vitality as well as some salves that can stave off the effects of poisons. Next the meet up with Lord Groften and his men and head out to the Citadel, just as the Bludfingers show up and begin causing troubles. Groften ushers the party onward, saying "We shall handle these fools, you take care of the spears!" The party enters the dungeon below the Citadel and proceeds to the portals.

They step through the portal and immediately notice that this is not a calm, elven temperate forest. Instead they have exited the portal and stepped in a vibrant jungle. 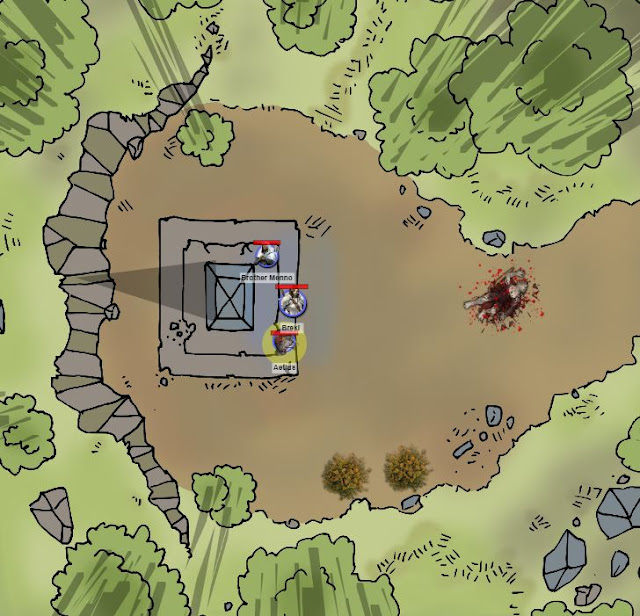 the exit from the portal

(At this point we were joined by a third player, Bryan Meadows who plays Breki the warrior).
The jungle was full of noise and movement, immediately casting the party into a state of worry regarding their safety. To add to this, they noticed a larger-than-human body on the path before them, his internals ripped out upon the ground. Upon closer inspection, they realized his body was still moving...something was inside the body, moving about. Quickly, Aetius opened himself to the magic that lies within the world and could feel what he deemed to be the presence of the weirwood trees to the north-north east. Thoughts of leaving the trail and moving through the thick, almost barrier like, jungle were discussed but quickly dismissed in favor of the trail.

Suddenly two bushes to their right, uprooted themselves and moved from their shady spot and into the sun. This place was becoming quite unsettling for the party and they had thoughts of retreating back through the portal.

A large centipede appeared out of they jungle to the north, moving towards the body and was immediately set upon by the rival centipede that had been hiding inside the body. The two began a vicious battle for the remains. A third centipede appeared and began moving towards the fray. The party wisely chose to skirt the battle and dash down the trail, hoping to put the violence behind them. 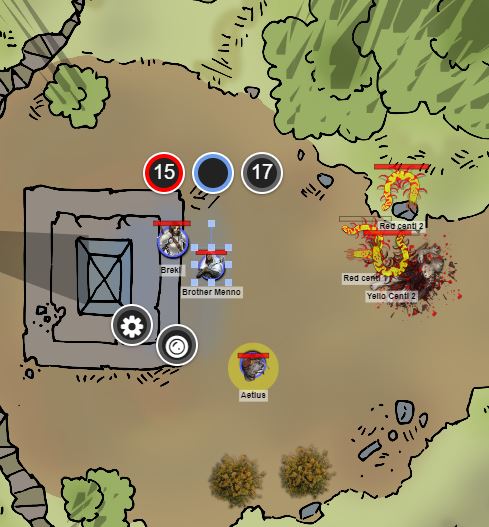 multiple centipede via for the nourishment of a corpse

Moving quickly down the path, dodging another sun-bathing centipede on a sunbaked log, the party discovered two monoliths to the north through the thick forest and deemed they needed to explore, in case this might be the magical presence that Aetius had felt. Moving through the dense jungle proved difficult and visibility was limited to about four or five feet. Out of the foliage, Aetius was suddenly attack and struck by a giant rat, easily ten feet long, thirteen feet long to the tail. It was huge, vicious, and possibly rabid, striking quickly and without warning. The blow was cruel and nearly killed poor Aetius. Menno and Breki quickly stepped in to shield him and likely saved him from certain death. 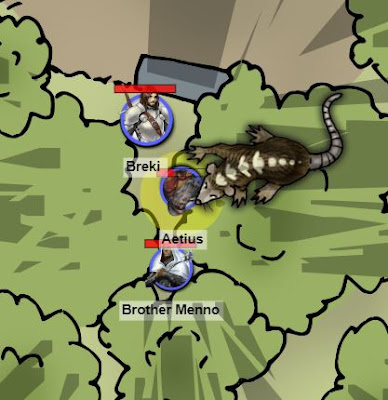 Aetius discovers the dangers of the thick jungle

Quick work by all three resulted in the creature being slain and the party drug the remains into the clearing just ahead. Aetius took care of his wounds, Breki stood guard and Menno did some meditating. He could feel the 'Horned God' atop his dark tower to the northeast and was physically slammed by force when the god turned to face him. Breki noted that during Menno's meditation, glowing symbols appeared on each of the stone monoliths but he was unable to read or understand the symbols.


PLAYING WHITE BOX.
With this session I have officially adopted our Mage Staff rules (I will post this rule another time) and Tim immediately gravitated to the rule. The rule certainly provides his magic user with a bit more depth and he loaded his staff with utility spells and kept the offensive spells to his memory.

Also with this adventure I am switching from all home-made adventures to a 3rd party adventure (or possibly setting depending upon who you speak to), though I am highly modifying it so that certain aspects of the adventure fall in line with my established statements on the 'ancient elven homeland' and the needs of our party.

I really like WB because of it's lack of depth and detailed rules allows for more 'rulings not rules' philosophy, I can decide things on the fly without spending a few moments looking up a rule. And even if we do need to look up a rule, the slim book makes this very easy. For initiative I had each side roll once, and we simply used that for the remainder of the encounter. This caused a speeding up of events as we no longer needed everyone to roll, determine who went when, etc.

One aspect of WB I really enjoy is ability to generate details on the fly. This is not really a function of the system but more of a side effect. The party dodged the centipede encounter, a 'planned' random encounter (I randomly rolled prior to the game session so I had this first encounter planed out and ready for them). This caused the group to move along a little faster than I had expected and I had to think on my feet, my map was not that large and had no other encounters planned. I knew the right side of the map had a clearing that could prove interesting so I let them wander ahead, hoping they would catch sight of it through the trees (see below).

I quickly used a random encounter table to determine that a single giant rat was hunting nearby and I took the opportunity to have it spring a surprise attack on the party. One of the players even remarked that the jungle is full of noise and we do not have to worry about being quiet. Cue DM random attack. I did not have giant rats stats on hand (I had not planned for this) but I tossed up ideas and quickly wrote down AC 12 and HP 22, 3 attacks of bite/claw/claw all d6. Easy peasey and I was ready to go.

USING ROLL20.
One thing I discovered that I really enjoy using is the dynamic lighting for forests. Here is a close up of the players will see. Here I have taken the time to add numerous small squares to stand in for tree trunks and to mimic the idea of a thick forest. Below is the players' view. 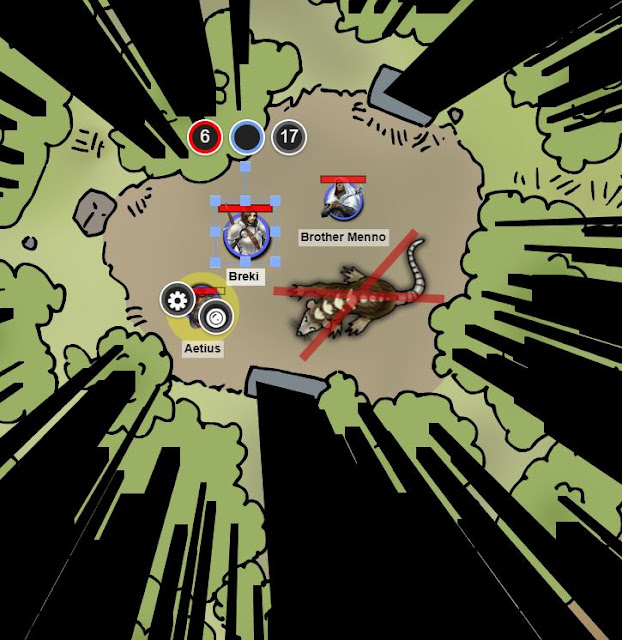 Next is the same view, but farther out. If you look closely at clock directions of 10, 4, and 5 from the party you can barely make out that something is surrounding the party, hidden by the trees. Observant players will keep an eye out for this sort of thing and I think helps add a little to the immersion of being in a living, wild forest. 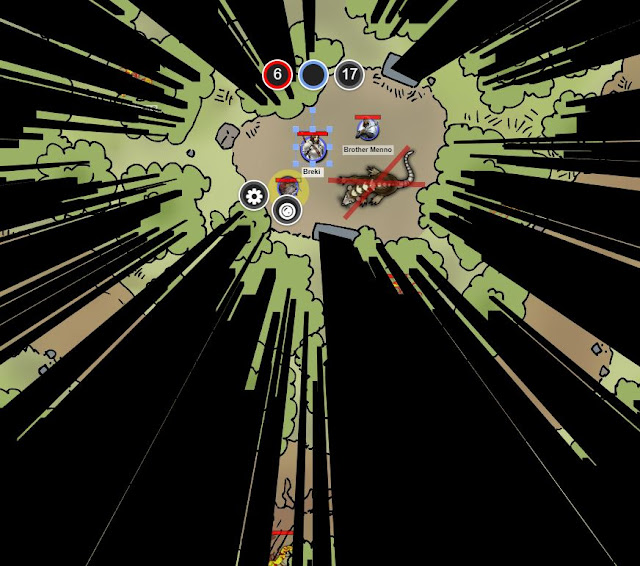 Here you can see how I accomplish this. An assload of squares of a variety of sizes. The effect is really cool as the players move through the forest, with pockets of clear view presented here and there through the forest. As they moved through the jungle this allowed them to know something was in the woods to the north, but they were not sure until they moved there. As a GM I love watching the players wonder among themselves as to what lies just beyond their view. Is it safe or dangerous? Oftentimes they cannot tell until they get there. Another tool of Roll20 I found effective was the Jukebox. I found some ambient jungle sounds I had playing and then every once in a while I added a distant roar the players could hear. One player mentioned the roar every time I did it. What is roaring in the distance? We don't know, but it sounds BIG.