For a record of our previous adventures:
Read about the 'first' session.

WHAT HAPPENED.
With night setting in and Aetis in need of recovery, the groups decides it best to camp for the night. The grove they have discovered appears to be some sort of safe-zone. As the light began to fade (see DM Note 1 below) the jungle came alive with sound, including that of things moving the in the nearby bush (DM Note 3), Aetius spotted something moving behind Breki and warned him (see DM Note 2). Breki turned to see a six foot long salamander (the players made a point of mentioning these were more like newts than the traditional D&D fire-breathing salamanders). 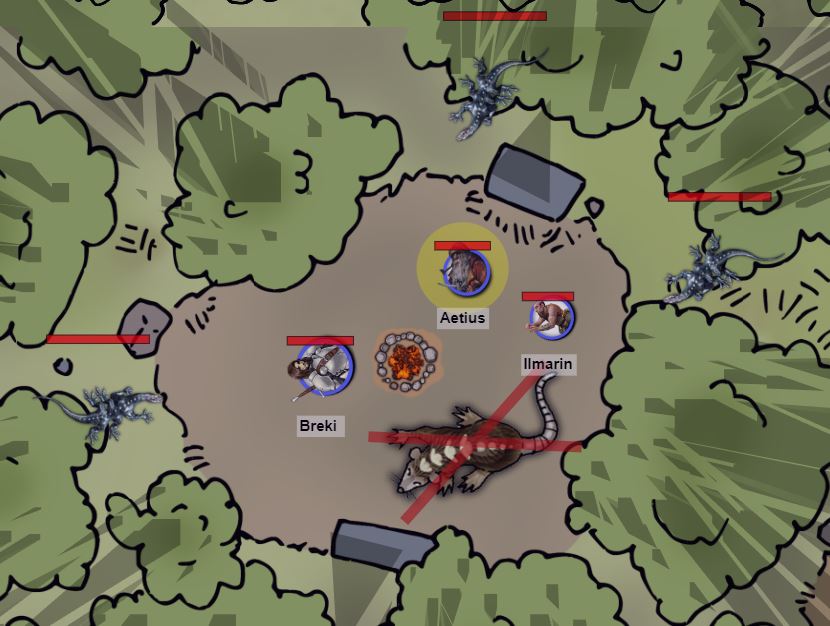 Breki tossed food to it, which it appeared to enjoy but the creature did not enter the clearing inside the grove of trees. Ilmarin told Breki he was a fool to feed it, fearing that "What will it do when you run out of food?" Two more were spotted moving through the jungle underbrush and while they seemed interested in the group, they ignored the party and began to move along. Suddenly loud thumping foot steps were heard from the south, along with a curious humming sound (DM Note 4), at this, the salamanders turned and scurried away to the northeast. The party was quiet and observed a large stone-like creature apparently on a stroll, heading from the south to the north, turning along the path. They opted to merely observe and it passed by without incident.


Morning came, the night uneventful beyond strange sounds and the group woke refreshed. After a discussion it was decided to follow the road north, hoping it would lead them closer to the Weirwood trees they sought. As they travelled, Breki proved to be a curious fellow and found a path heading off to the west and immediately began to head that way to check it out. He discovered what appeared to be a relaxing park, a couple of columns with long lost writing faded across their surface, two broken stone benches, an elaborately carver but also weather worn statue, and stairs leading down into the dark.

Aetius studied some writing on the wall next to the stairs and could only see two symbols clearly, he found the symbols below. But he could not understand what they represented, he cast "Detect Magic" but was foiled again and could learn nothing more from the symbols:

Ilmarin blasted Breki, saying the mission was northeast, not west, but Aetius was curious as well and headed down the path to investigate. This set up a little tussle between the party members and who 'was the leader' (quote entertaining). Aetius began to have second thoughts and as he turned to return to the main path again, something emerged from the jungle. The very grass seemed to come alive, slithering over a cliff like a waterfall and moving to the path. Long vines began to reach out toward Aetius, who wisely turned and went back to the idea of exploring the dungeon below (I like how dungeons are becoming less dangerous than the jungle in the mind of the players).

Ilmarin noticed the salamanders had returned, moving slowly and stalking the grass creature (DM Note 5). Ilmarin lit a torch and tossed it at the grassy thing, rolling very well for placement of the torch. The torch landed and caused the creature to being squirming, vines swatting out like crazy. The salamanders took the opportunity to bite off a few of the vines and ran off to enjoy their snacks. Ilmarin sprinted past the creature to rejoin his friends and they descended the stairs. 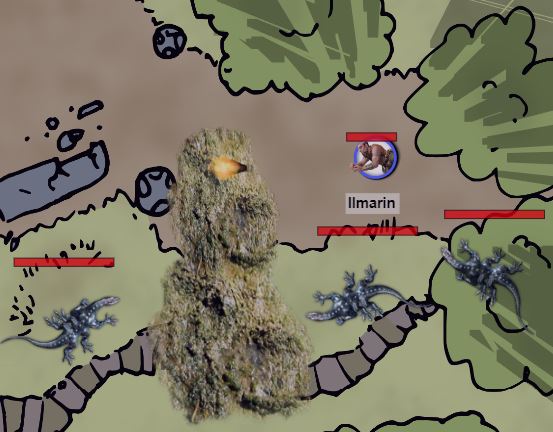 Down clearly old, but at one time quite fancy steps, and the party came to a large room with ceilings at least 60 feet high. In the center of the room was a massive, fifty foot tall angelic statue. She had been beaten and bashed, with chunks missing, scratches and scars marring her surface. Huge wings appeared to at one time spread wide to stretch from wall to wall. Long beaten and bashed mosaics filled all four of the walls.

His detect magic spells still active, Aetius detected some strong magical force in the rubble and discover a fist sized blue gem, magic pouring out of it. Always a keen eye on valuables, Breki searched the rubble near him and discovered a matching gem and flipping it over discovered that it was carved on one side to resemble an eye. Not heeding Ilmarin's suggestion, he raised it to his eyes and looked through the gem...

The place came alive and he could see the room as it appeared eons ago. Gleaming white walls covered with colorful mosaics surrounded a beautiful and impressive statue, wings spread and arms out, holding a huge key in one hand and brandishing a glowing torch in the other. Then ghostly people began streaming into the room, bowing before the statue, studying the mosaics, and proceeding through now closed brilliant bronze doors at the back of the room. This sneak peek at the room as once stood was impressive...

[We hit our time for the night and ended here] 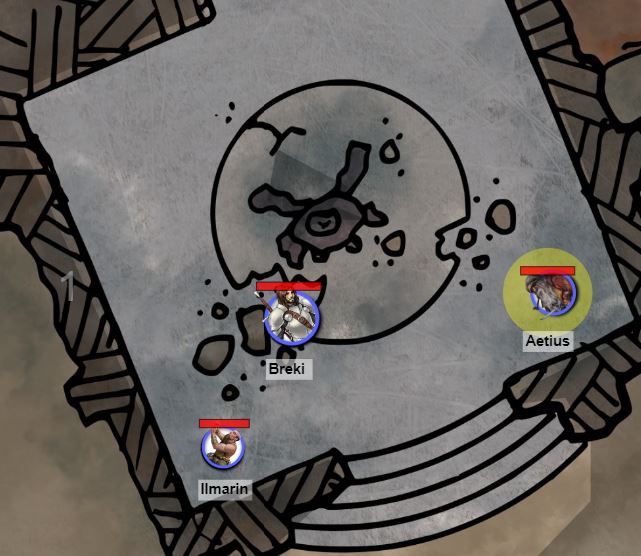 PLAYING WHITE BOX & ROLL20.
If you are a player of mine, you might not want to read below, could contain some spoilerish type things as I give people a peek behind the curtain.

With this session I have upgraded my Roll20 subscription from the "Free Backer" status I received as a result of backing the Kickstarter way, way back to a "Pro" account. This allowed me access to the Pro forum section, with all sorts of tricks and tips. Another bit with this session, last session one of the players figured out from some artwork I showed that I was using The Dark of Hot Springs Island so with this session, I let it be know that I am using it, but meshing it with aspect of Kalmatta as well as the classic module The Isle of Dread. So there are certainly aspects of each that will show up in various parts of the campaign. I am stealing pieces that I like from each and tossing them into the mix. Hopefully it all works out and the players enjoy it.

DM Note 1: One thing I discovered was that you could apply an aura to a token out of sight of the players to simulate the fading light. I dropped a random token down, put a black aura on it and it made everything sort of gloomy. Merely duplicating this token made it get darker, giving the feel of the fading light as the night set in. Worked ok, but not perfectly, but I felt this added a little to the atmosphere.

DM Note 2: With this session I decided to up the ante a little and I applied an angle to the character tokens, effectively mimicking how we as people really see, about 160 degrees to the front of us. I think the players felt this was a little annoying because now there were many comments such as "Something is moving over by you" and "Where????" as they spun tokens around to try to see the map around them. I however, liked it. Monster can now sneak up behind characters with ease and the players really have to stay on their toes. Once we get in the dungeons I see this as being particularly harrowing for them and fun for me. 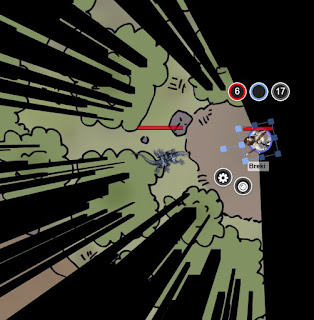 DM Note 3: One thing I have tried to emphasize is that this place is crawling with life. Every session so far the players have ran into two new creatures, at random, that call this place home. While these encounters have not all ended in combat or the players being attacked, they have put the players on edge. They are nervous. They are worried about their characters' lives. One player mentioned pre-game how dangerous this place was turning out to be, and that is exactly what I wanted. 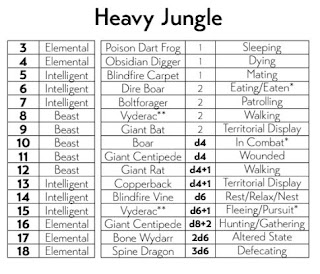 DM Note 4: As noted in DMn3 above, I want this jungle to be alive. So I rarely let an opportunity slide without having a random encounter. One thing I really like about Hot Springs is the random encounter tables. Each hex has tables specifically designed for it, so each table is unique to it's location. Now, this is not anything revolutionary but one thing I really like is it adds a second and third roll to the encounter table (to the right). So you roll encounter type - what is encountered - what they are doing to give a matrix of possibilities. So you may get Beast - Bear [d4] - Wounded, or Intelligent - Vyderac [d6+1] - Fighting and then you as a GM interpret this and apply it to the situation in their game. This is a fantastic idea and perfectly implemented. Rather than having to come up with a complete encounter on the fly, you are spoon fed a few bits of information, which for any good DM will cause your gears to start spinning with ideas.

So in the heat of the adventure, I get fuzzled up and stuck for something to happen in the game, I roll on the table and immediately get a short statement (Four giant rats are fighting) that helps spur imagination and causes me to create for the game. So far, it has worked brilliantly. ALL of the encounters thus far in the jungle have been determined in this fashion.

DM Note 5: Here is a picture of the creature, you might recognize it from a certain very large book. I played it up as if the ground came alive, sprouted vine-like tentacles, started moving, and appeared hungry. They players seemed only somewhat afraid of it, merely cautious, until it rose up and showed it's toothy maw on the underside. Aetius immediately turned around and was all "nope nope nope!" Face that thing or enter a completely unknown and scary dungeon??? Yep! And off they went. 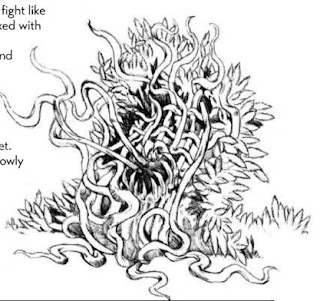 GENERAL NOTES.
With this session I have gone farther down the tunnel of leaving White Box and going to B/X (in it's B/X Essentials incarnation) for the game. While some people, including myself and one of the players, deride the race as class stylizing of B/X, I am starting to think that this is not enough of a dampener on my liking of the system. I recently got my hard copy of James V. West's Black Pudding #4 zine and with it Peter Regan sent along a copy of his FOSSIL  (Fantasy Old School System Index Lite) booklet. This little booklet sums up the B/X rules quite nicely, though I did not notice a few discrepancies between it and the B/XE books, and is pushing me ever so closer to scrapping White Box in favor of B/X.

This is not because I no longer like WB but more that B/X offers more adventures and supplements and has imo just as streamlined rules as Mason's version of WB. Gavin's B/XE is cleaned up, easy to read, has a little bit more crunch for the players (yeah, I did not think I would want that either) all while still being fast, easy, and something are all familiar with.