CURRENT ROSTERVance - Yozzat, a dwarfJoe - Olwen Door-Hinge-Bane, a human rangerTim - Raymondo M., human thief
Seana - Marigold, best class ever....HALFLINGSteve - Dosta Grimm, a fucking elfShane - Ralgar the average beetcake  ;)
Ep 19.  Bandit battle - 4 MarThe party continues the desperate battle to regain their stolen treasure...and things immediately go downhill. Yozzat is nailed by the troll, nearly killing him. Dosta pulls out one of his magic cards and attempt to sway/distract the troll but the troll resists the trolly womanly ways (we all have a good joke about Dosta not knowing what a 'sexy trollbabe looks like'. Olwen gets blasted by the troll, rendering him to zero hit points and launching him into the bushes. 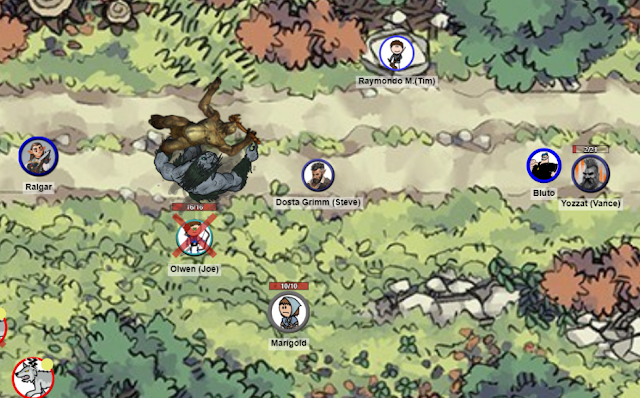 As this was going on Ralgar joins the fray and attempts to hit the troll from the rear, but misses. The party suddenly realizes they have hirelings (this is a constant problem with us) and they rush headlong into the battle. Bluto, Joe's favorite hireling, charges in, tosses his spear, misses, then attempts to grapple, misses and ends up behind the troll next to Ralgar. Raymondo sets himself up on a boulder just out of reach and starts taking shots at the troll, landing a few solid hits. 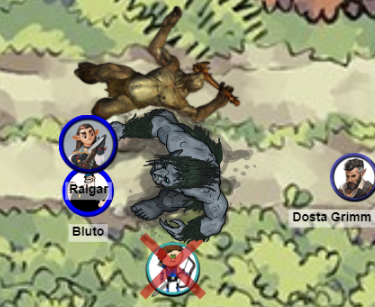 Bluto grabs his spear and joins the attack. Dosta pulls out a flask of oil and dowses the troll from behind, but no one has a torch ready. Raymondo begins lighting a torch while Yozzat tosses another oil on the troll. Moments later, the troll is engulfed in flames. 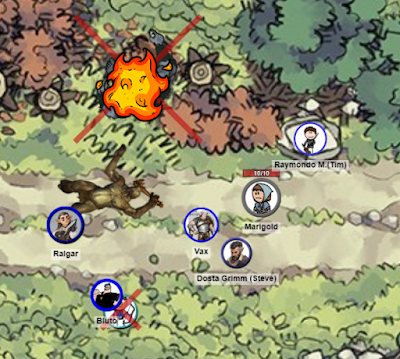 Catching their breath, the party realizes that one of the bandits and that darn mage have slipped away! Luckily though, the party recovers all their gold and treasure, plus some additional items (see the previous post about a map) and additional gold. The party has come ahead in this, though they lost one of the longest running party members, Owlen.
DM's Thoughts:
For a hastily thrown together encounter, I think this went ok. There were some issues (yeah the troll was a mean DM moment) and a certain mage cast one more spell than they are actually allotted, but overall, it went well and in the end the party came out pretty good.
I have done a little 'soul-searching' as a DM. While I have achieved the goal I set out way back, "Run a campaign with quick little trips" I have become a little jaded with it. The original goal was to simply get us playing again and now that has happened and party members are starting to level up. I feel a yearning for a more involved storyline, a real 'goal' for the party besides murderhoboing all the time. I counted it out and we have entered four dungeons and left, never to return.
With Shiteton I have given the party a few NPCs that have story plots that could be developed but so far, the party has seemed to be content with slash and grab tactics on local dungeons. The village is situated along the 'frontier' in a land rich with ruins, dungeons, and places to clear but for whatever reason we lack the stick-to-itism to finish a place. I feel this getting a bit stale and I have a grand adventure in the works with a goal in mind for the party if they take the bait. I have some work ahead of me to finish up this dungeon but it is already planned out in outline form, so this should not be too hard to complete.
For now, the party is planning to return to the well (ep 16 & 17) and complete this dungeon. After that, who knows.