SESSION FIVE: In which the new Magic-User goes insane
Recognizing that the DM was not playing around, the players decide they need cannon fodder to survive. After being directed to Chomper's Boat, a sort of inn built in the wreck of a boat on the eastern end of the hamlet, they quickly offer some cutthroats far too much money (3 coin a day!) to join them on an exploration back into the Grotto. They are joined by Mardric, Freaya, Harog, and Rathmax. The party offers to suit a few of them up in their former colleagues' gear (talk about heartless bastards). Now accompanied by some stalwart fighters with amazing armor class for Retainers, they head back to the Grotto, just two hours west of Scaldwater Bay.

Side note: Hirelings are the folks you hire to carry shit, clean your house, etc. Retainers are the foolish redshirts you hire to die instead of you in the dungeon! All my life I have been calleing them hirelings! According to the OSE rules, Retainers are: NPCs that are hired by characters to accompany them on an adventure. (NPCs hired for non-adventuring tasks are treated as hirelings, see Hirelings.) 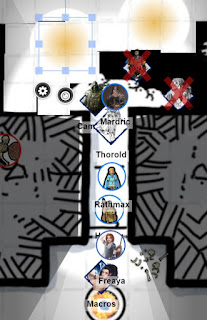 They enter the Grotto and enter the fog room again. A tense moment ensues when the party finally encounters the Will 'o Wisps that are trapped in this room. Steve has a tense moment standing face to face before the two shoot out of the dungeon and too freedom! Editor: I would have easily killed at least one Retainer or PC if a fight had began. W'oW are no fucking joke. The party easily scales the pit and climb back up to the far passage.

Up a flight of stairs and they come to an area with small alcoves on each side. Thorold is able to use his smart magics to decipher some of the ancient script:

A king named Adar Ek-Or ruled long ago, with his son Adarum Ag-Or at his side. The son had three brides Mashta, Lasa, and Byzu. Despite the son being beloved by all the kingdom, Mashta took a lover. When confronted by Adarum, Mashta rebuked him and ran to the arms of her lover. Adarum and the lover fought a lengthy fight with the lover eventually slaying Adarum (the text appears to imply the lover cheated, or had no honor). King Adar then slew the loved, and cursed Mashta. In sadness, the king then died of a broken heart. 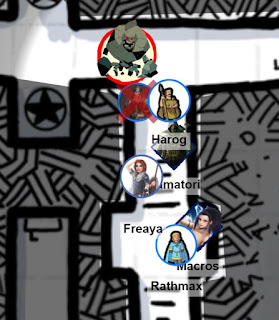 Thorold decided to become rather bold at this point and ventured forward, turning left and encountering two large stone statues. These statues were crudely carved but stood eight feet tall and looked rather daunting. A large blue gem rested in the middle of their foreheads. He stepped before them and suddenly cracks began to emerge as the statues came to life! "Oh shit," squeaked the magic-user and he bolted down the passage....farther into the unknown! One statue clambered after the foolish magic-bender, while the other accosted the party.

Immediately Mardric suffered a tremendous attack, his head smashed against the dungeon wall by a massive stone hand. Brains oozed out of his ears, nostrils and he fell dead to the floor. The rest of the party braced to combat this new danger.

Meanwhile, deeper into the dungeon and alone, Thorold ran down a passage attempting to open a door he discovered. Locked, he squealed and turn to run farther down the passage, coming to right turn and another locked door. Perhaps finally realizing the path he had set his life down, he froze and waited for death to claim him. Editor: Yeah, we were all a bit shocked by this too. Who the fock runs away from danger by going forward into the depths of the unknown??? 3d6 in order buddy, this is not going to end well.

Back to the main party, the retainers open fire with arrows and one...Freya? I forget now...fires a silver arrow, landing squarely in the blue gem with a natural 20 roll. The magic that held him together is immediately shattered and the statue crumbles into a pile of rubble. Cam and Harog immediately sprint down the dark passage, looking for their foolish friend. 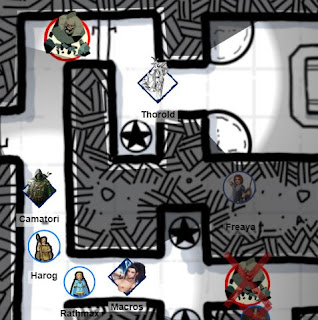 They turn the corner just in time to see the statue lunging for the mage. Fortunately for Thorold, it was not to be the statue's day, rolling a 1 on his attack. The statue completely bumbles the attack, plowing into the corner of the wall, smashing through it, and crashing into the metal door and partially bursting through it. Thorold, thankful to be alive, and without a thought, jumps over the statue and through the half-opened door.
Behind him, Cam and Harog go to work to save their friend. A few great shots and arrows pepper the statue, ending its magical life. The remainder of the party rushes to locate their strange friend, finding him safe in a room. A massive statue of a voluptuous fertility goddess stood near the entryway and two shimmering pools of clear water rested before a large stone sarcophagus. Sturdy shelves along the north and south walls hold dozens of smaller versions of the fertility goddess, ranging from an inch tall to six or seven inches. The group immediately recognize that these would be worth substantial coin back in town and especially to the right collectors.

Thorold fills one of the bottles he carries with the water from a pool. Then, again seemingly caught by a stroke of insanity, he takes a quick drink from the pool....

DM NOTES
Wow, this went so far in the other direction from what I expected. I do not think I have ever had a player run into the unknown and distancing themselves from the rest of the party. I was very surprised.