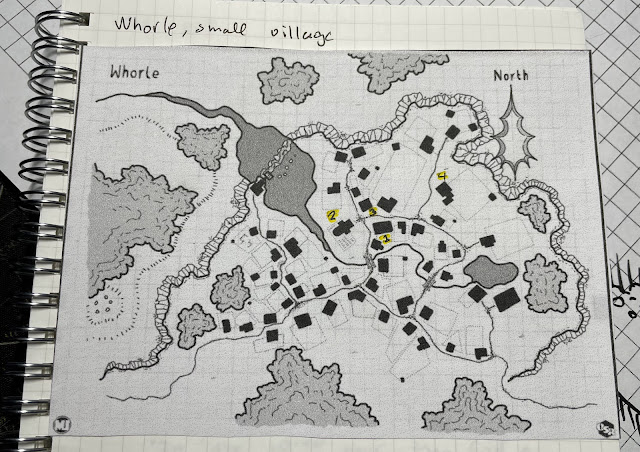 After my successful little adventure I thought perhaps I might go on another solo adventure. This time I opted to use my go-to system, White Box FMAG. I grabbed a village map from the blog here (was drawn for the Midderlands zine but I never ended up fleshing it out). Thinking up a quick way to get tons of small and nearby dungeons I could explore, I grabbed my Barrowmaze complete book. And off I went.

I rolled up three characters the old fashioned way by the rules and ended up with a human fighter, human cleric and a halfling thief. I even used 3x5 cards! Wooohooo old school! 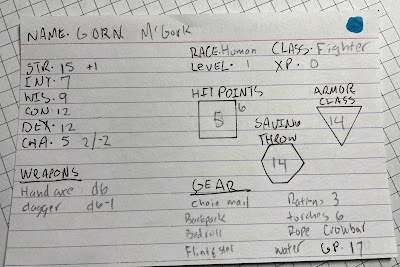 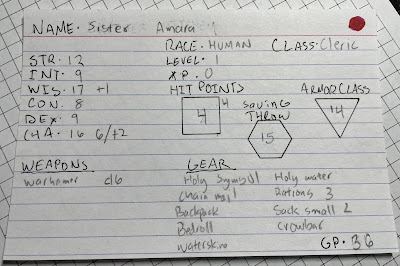 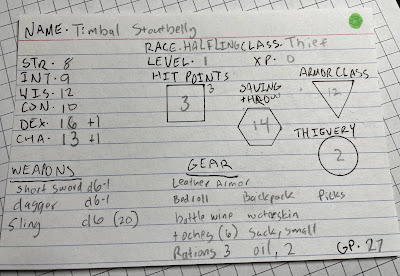 Then I drew up a quick hex map and decided to drop in a mist-shrouded swamp in a low land between the ridge Whorle sits upon and mountains to the north and east. 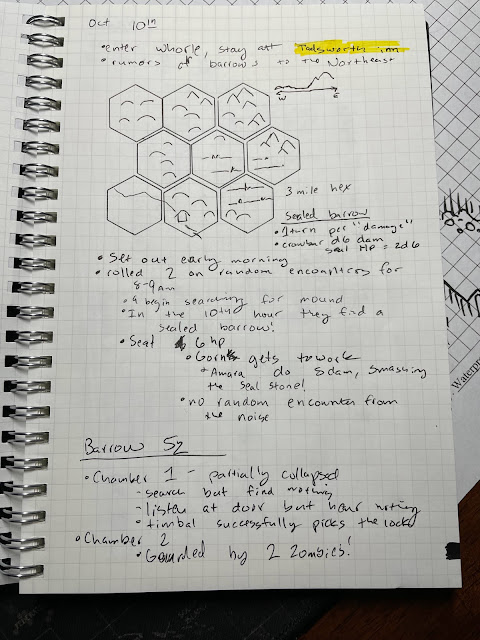 You can read my cryptic notes but essentially we headed out of the village of Whorle early in the am and travelled approx 3 or 4 miles into the swamps. Our group searched for two hours before they located a barrow mound, I randomly determined this was barrow 52 (if you are following along in the book).
This was a sealed barrow, so I made up some quick rules to cover that, giving the sealed doors HP (2d6) and every turn we attempted to open would 'do damage' equal to d6 for each person working on it. Since two of the characters had crowbar....something my old group discovered to be very useful...I rolled a d6 for each for every turn they spent working the door. With a couple of lucky rolls, the party was able to make quick work and soon the stairs disappeared into the darkness before them.
Lighting their torches, Gorn led the way into the depths. The first chamber had a partially collapsed wall, the party searched but could find nothing of interest. The walls has ancient etchings with faded and chipped paint displaying grey snake-like creatures. Amara shivered, she hates snakes!
Brave but cautious, the party listens at the door in the western wall and hear nothing. It is locked but with a good roll our thief manages to unlock the doors just as two zombies burst forth and surprise the party! 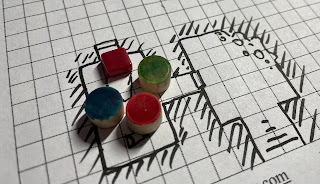 I am using simple wooden pieces for the characters (they are color coded to their character sheets). For the baddies, I am using small mini glass tiles I picked up at Hobby Lobby.
One nails Gorn for a serious blow while the other hits Amara! This is not looking good. The next round they win initiative again but luckily both miss, Gorn follows with another whiff but Amara steels herself and calls upon her deity to banish these foul creatures, rolling a 20! Tim sends one to hell with his sling. Then we tie init, the zombie misses but Gorn smashes the creature with his axe.
I am allowing the "Binding Wounds" optional rule on page 39 so Gorn and Amara gain back some of the damage they have sustained before we continue. 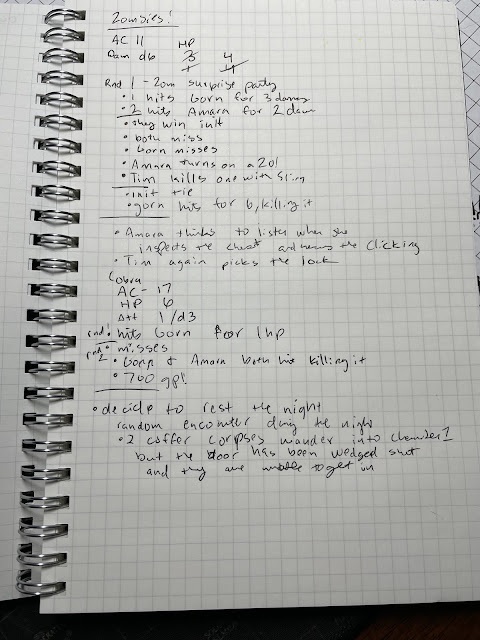 A sarcophagus lies here, already open, perhaps the zombies once called it home but a large chest sits just in front of it. Timbal begins inspecting it but fails to listen, Amara though happens to listen (I rolled a Wisdom check to see if she might think of this) and hears to the weird clicking inside. Thinking this might be a trap of some sort, the party covers their mouths with clothe and stand to the side while Tim attempts to pick the lock. Rolling a 1, he manages to easily pick the lock but the Clockwork Cobra inside leaps out (randomly) striking Gorn for 1hp of damage! It wins imitative (man we suck!) but luckily misses this round. Gorn and Amara both smash this thing and it lies in pieces at the end of the round. Timbal's eye grow wide when he looks in the chest and sees 700gp inside! They are rich!

The party decides it might be smart to rest for the remainder of the day and night. The party manages to use their rope to secure the door to chamber 2 and settle down hopefully for a quiet night. They take turns on guard duty to ensure all have decent rest. I roll for a random encounter once for the rest of the day and twice that night, only getting a success on one night roll. A pair of Coffer Corpses wander into Chamber 1 and try the door a few times but are unable to overcome the rigging.

The party wakes in the morning, rested, suddenly wealthy, but still inside a barrow.....