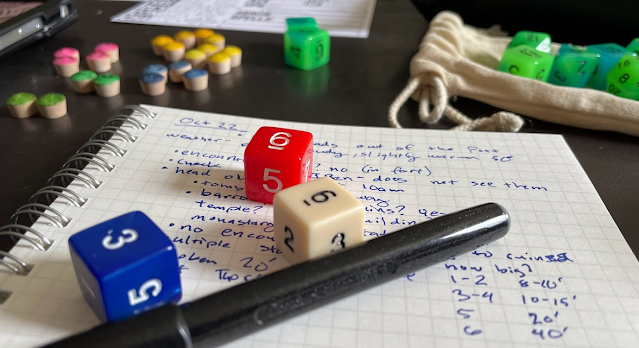 Early morning - Rem heads out of the fort. Reason unknown.

Thinking they might be able to get hired by Brother Iben to scout out this grove, they go to see him but he is not available. The band discusses their next move over an early cup of ale and decide they will explore the nearby tomb- its close, pays decently and with four (possibly five) of them, they believe they will have enough power to muscle their way through any problem they confront.

Time to learn more about this tomb. How far away? About 6 miles , rolled a d6/2 then added 3 miles. I knew previously where it was roughly but not exactly. I wanted it close to the fort, but not too close. It is a barrow? No. Ruins? Yes. A temple? No. Is a building present? No, so it must be accessible from the ruins but not enough remain of the ruins to be properly a building. A monastery? No. Are their statues? Yes. More than one statue? No. Is it larger? Yes, then I threw together a quick table (to the right) to figure out how large the statue was. I roll for encounters but get a 4, nothing happens along the way.

Perceptive readers might notice that according to my write up here on the blog, the statues already existed. When I played, I did not know there were statues and added that later when I was writing this up for you. I had seen a short tomb dungeon previously and I scoured my google drive to relocate it for this adventure. I wanted something short, not too deep and I settled on this adventure:
Pamphlet Dungeon : Thorfinn's Tomb from Crooked Staff Publishing.

The band approaches the tomb, since Toltin was in the band when they first encountered this, he has no problem guiding his friends there. As they approach they see a 20' tall, broken statue of Thorfinn stands in a slight clearing surrounded by thick brush. Toltin and Findara check around and quickly identify a way into a hidden tomb, a pitch black open maw.

Findara and Basil light torches, Basil mutters "Many days have past since I entered the darkness..."

They enter a dark, dry tunnel, the walls carved roughly from the rock. The tunnel turns slightly, and ahead the wall turns into a wall of morbid skulls. Unknown to the group is that a ghoul awaits them there, ready to pounce!

Do the band members notice the ghoul? WB provides no clear mechanic for this so I opted to use a Save with a modifier for a high Wisdom to determine if the group notices the creature waiting to spring his trap.

Toltin fails, focusing his attention more down the dark tunnel but Basil spots the thing waiting and whispers a warning to his friends. Grindella, has heard of these creatures previously and schools the band quickly. These are not powerful creatures, but they can be deadly. The group discusses a tactic and having the missile launchers stay back so they might rain down missiles on the ghoul when it makes its move.

The ghouls plan is to push the wall of skulls over onto the band, trap them and then attack while they are struggling to get back on their feet and out from under the skulls. I decide the band will need to make a Dexterity check against a 10 to avoid the tumbling skulls, I give them a +1 since they are aware of the trap.

Basil is the first through the pinch point and the ghoul, as expected, pushes the wall on him. Basil tries to jump ahead of the pile but his bulk slows him and he stumbles on a skull, slipping and coming to rest as skulls pile over him. Only the top of his head can be seen. The ghouls leaps down and moves towards Basil. 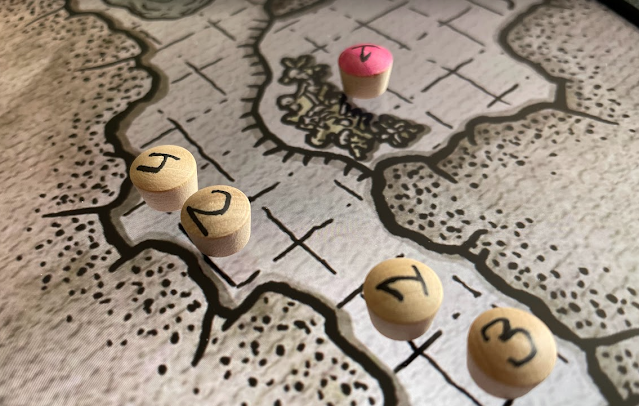 Toltin whips a stone at him, but his sling clips the wall and goes wild, as he ducks the sling slips from his hands and smashes into a side wall (he rolled a fumble). He will spend next round gathering his sling and digging out a new stone to toss.  Findara raises her bow to take a shot but the ghoul is something she has never seen before. The gore dripping from its fangs frightens her and she simple stares in shock at the creature crawling towards her friend! 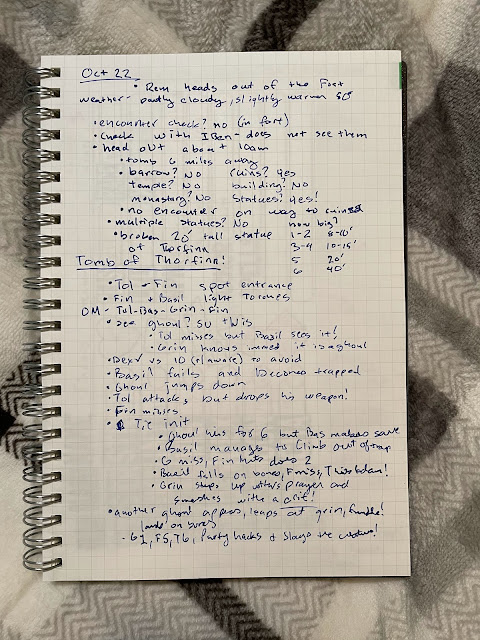