Expedition to The Forsaken Fell, ep01 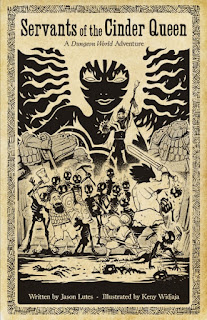 My group has finally managed to get around to getting together again after a six month hiatus. Well, that is not actually true. A few of us have been playing via a play by post for about four months now and we decided to move to Roll20 after lives calmed down and real life offered us a little reprieve. I have been running Servants of the Cinder Queen from Lampblack & Brimstone, albeit with a number of changes (primarily due to the adventure being made for Dungeon World, also, the black and white images below were screen capped from the adventure). The adventure is excellent and I highly recommend it for use with any system, the layout, art, and story are excellent. Here I am lightly tweaking it for Basic Fantasy RPG, my current game system of choice.

As I said, we started in a Play by Post game played over Google Groups since February and it was pretty slow with us finally making it to the ruins of an old monastery called the Forgotten Fell. They had set forth from the village of Meervold where people were disappearing at an alarming rate. They had encountered cultist looking fellows that had apparently-magical flames danced across their forehead (see the image below, except I changed the image on their cloaks to be actual flames. because fantasy). After saving a villager in a midnight raid by the cultists, they had determined the bad guys were coming from the area known as the Forgotten Fell, a ruined town farther up the side of a semi-active volcano. They recruited two assistants as guides and headed up the mountain. Once there, they set up camp and set out to explore the area. 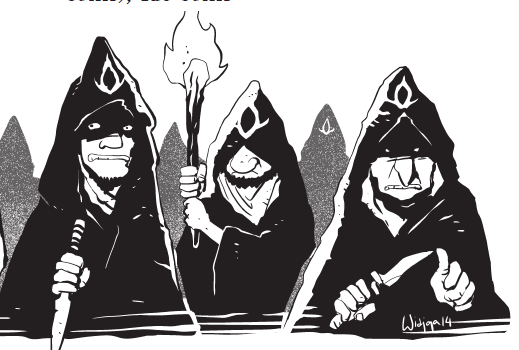 The cultists, looking vile and evil.

Our group consisted of Kendric, a halfling thief, and his companion human fighter named Wulfgar. They had initially split up and began to explore while the two hirelings, Porta (a goofy young kid) and Adrnt (a seriously old dude who lost a wife to the cultists) set up camp at the edge of town. Kendric headed south, following some footprints and came upon a single figure, almost naked, a flame dancing on his head and he staring away into the distance. Wulfgar headed east, coming across two similar figures, except they were busy in an alleyway. What exactly, he was not certain.

This is where our Roll20 session began. Alessandro plays Wulfgar and Bryan plays Kendric. I think I meta-gamed a little here as we started, mentioning a TPK and the oft-erred-upon idea of splitting the party. Kendric almost immediately hightailed it to camp and then on to Wulfgar. ;-) 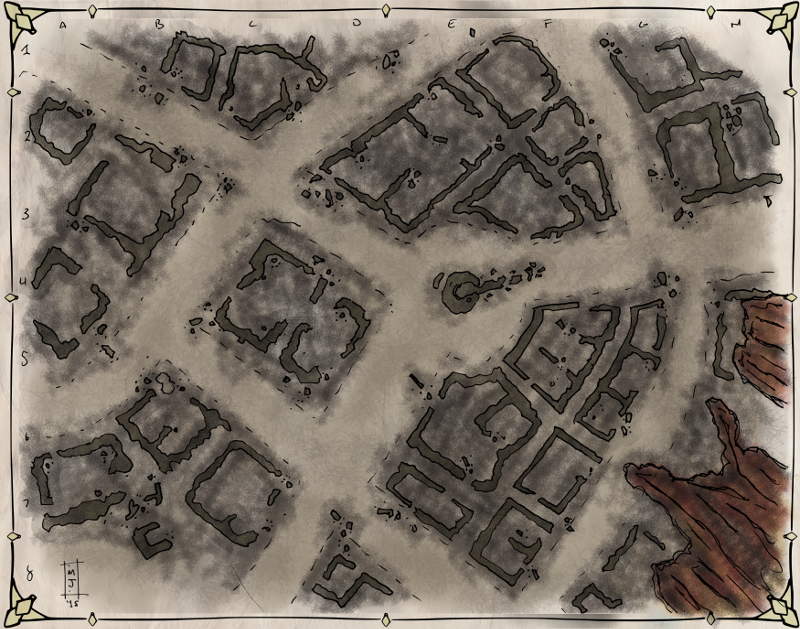 Map of the Forgotten Fell.

Wulfgar was roughly at E2 and was watching the figures in the alleyway around F3. After studying their activity for a bit, and releasing they didn't give two craps about him, Wulfgar determined the figures were clearing an area and moving the rubble. The figures were barely human, seemingly made up of ashes and bone, almost like a person had been burned to a crisp and this is what remained (see image below). 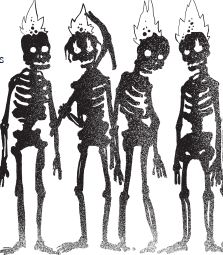 A moment later another figure entered the room at E2 and began digging. Wulfgar noticed the area looks like all the rubble had been pushed to the outer wall and and area in the middle of the room was depressed...a possible buried doorway. The figure worked at his digging and then suddenly the other two that had been working up and left, walking into the ruined building at G2. Wulfgar and Kendric followed along and discovered the figures disappearing into a deep hole. The hole was about five foot wide with a built in ladder created by hand and foot holds carved directly into the rock. Below Kendric head a woman's faint scream. A damsel in distress!

As they discussed the idea of following the figures into the hole or not to follow, they were suddenly surprised by a group of four men of questionable repute who came up behind them. The men wanted to know what the boys were doing in their area. The men suggested they leave the hole alone and leave the area. Apparently the men had been looking for the hole and followed the figures here as well. The men were not overly friendly and were quite demanding.

The moment was tense as the boys tried to decide what to do, they were outnumbered...but were they out manned? Kendric was halfway in the hole but decided to climb back up. Suddenly Wulfgar stopped questioning himself and moved faster than lightening!

Wulfgar's hand axe flew at one of the men, landing squarely in the man's chest, spewing gore and blood. Without hesitation he charged the apparently leader, bracing his shield in front to try to smash the man. In his haste however, he completely missed ;-) and instead crashed into the low and crumbling wall of the building. Rock and ash flew everywhere as Wulfgar crashed through the wall and landed out in the street.

The attack completely caugth the remaining men off guard (they were surprised) and Kenrdic quickly launched his two throwing knives at the still-standing leader. Bryan, the player rolled awesome here and managed a natural 20 (we quickly scanned the rules but found no mention of how to handle a critical so I ran with the old "double damage and describe something cool" method). Bryan said the leader raised his hand in defense, the knife landed in the palm and continued through into the man's eyes. I already knew the double damage was enough to kill the leader but let Bryan go ahead and roll for the second knife...a 19, he was totally on fire tonight. The second knife landed squarely in the man's neck.

He flopped over dead.

Now, I knew the leader and the guy Wulfgar had killed were the badasses of the group of four so I immediately rolled morale. I figured seeing your boss killed in a split second without a struggle would be enough to make you pee your pants. The third and forth guy completely failed their roll and both high-tailed it out of there as fast as they could. Wulfgar gave chase but opted not to continue on his own and returned to his companion.

When Wulfgar returned back to the room, he discovered Kendric was already looting the bodies: chain (unharmed because of Kendric's excellent knife throwing skills), a bow, sword and a bit of gold.

For a moment they considered heading back to camp, it was late and getting dark, but then adventure took over and they quickly climbed into the hole...

We played for roughly two hours, some technical difficulties (called Netflix hogging the bandwidth) slowed our start but once those were resolved the game ran smooth as silk. I would estimate we spent a total of an hour and a half playing.

I had initially decided we were going to switch our game from BFRPG to The Black Hack but the players talked me out of it. I am glad they did. In reflection, I can say that BFRPG is probably just as lite as TBH but with much more familiar mechanics and no quasi-storygamery silliness going on. Take away the spell lists and the monsters from the rule book and it is probably the same number of pages as TBH. Plus the rules are easy to read, free, and have a huge base of support over on their site. Also, for those who want the books IN their paws, they offer some of the books in print on Amazon for $5 or less for each. With Prime I can have nearly everything they offer in print for around $25 at my house in two days. Done.

I thought the game went great and was a joy to run. We originally planned on every other week but we all said screw that and planned to meet again the following week.