Expedition to The Forsaken Fell, ep02

We got together last night after a quick switcheroo of schedules. I had secretly been talking to another of our group that used to play with us and surprised Alex and Bryan when they opened the door and suddenly Rob popped into Roll20 and they met his character. We played for a little less than two hours but it felt just about right. I think we could have easily continued longer as everyone seemed to be enjoying playing again but it was already 11:15 for Alex so we opted to head back to camp and rejoin our two retainers up in the ruins. I think everyone had a great time and I am looking forward to having a running game, it has been a long time.

At the end of the session I asked if anyone wanted to write up a play report in exchange for XP (something I have done in the past) and Rob jumped at the opportunity. I think he did a great job and I love when players write reports from their character's point of view. Below is his report, from the viewpoint of his character, Heimlich. 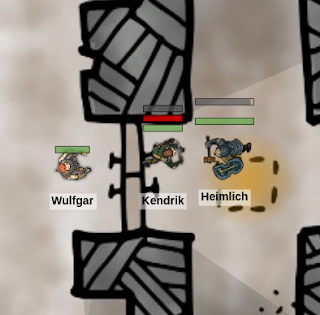 The Great Room and Meeting
“Sound? Footsteps. Possible salvation from my plight.”

Heimlich had spent the last 10 hours keeping the demonic wolves away from him and the bodies of his fallen friends. They had died trying to save one of their own, they wouldn’t be forgotten, but first the dwarven cleric had to get out of this room in one piece. He could offer last rights for his fallen friends once the wolves were dealt with. But merciful and selfless Goirin Fignus had sent him the help he had prayed for.

He tapped on the doors to get the attention of those beyond. Perhaps it was a terrible decision, but at this point it was a better option than being eaten by the foul wolves.

The doors flew open and Heimlich found himself looking at a halfling and a human, adventurers like himself by the look of them, but before he could greet them properly, the halfling asked about a girl as the human charged forward into the room, past him, to confront the approaching wolf.

“What girl?” was all that he was able to get out before his two saviors struck fast against the wolves. The human tossed a hand axe and the halfling tossed a pair of knives. One wolf went down immediately, while the other growled and prepared to attack. 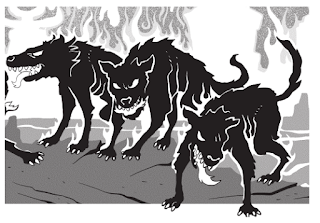 Heimlich wasn’t about to allow the saviors delivered to him by Goirin to fall to the beasts that had already killed off his party. He charged forward to the side of the human and swung Arty, his trusty mace hard and across the wolf’s head, causing it to stumble against the might of the blow and trip over his fallen den mate before crumbling into a heap.

The third wolf charged past the well-armored combatants toward the halfling in the back who met it with a battleaxe blow to the head which partly scalped the creature. The human quickly turned to help the halfling, but lost his footing in the gore that had spread on the floor for the first two wolves that had been felled. Heimlich was able to dispatch the wolf with Arty’s assistance once again. 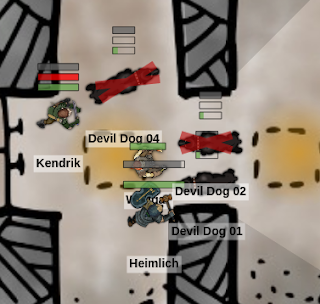 The group rested for a moment having dispatched the immediate threat and some quick words were exchanged as the halfling questioned Heimlich and the reason for his being there. As Heimlich explained how his misfortunes had brought him to the room, Wulfgar noticed two more wolves stalking toward the group from the darkness and excusing himself from the conversation charged the wolves.

Quick on the uptake, Heimlich rushed forward to join him and with two amazing blows from Heimlich and a couple well placed strikes from the human, the wolves were destroyed before they could even attack.

With the last of the wolves gone, the group once again conversed.

The human, Wulfgar, and halfling, Kendrik, were a little weary of Heimlich at first, but Heimlich quickly showed his value and true nature when he healed Kendrik’s wounds. The group then searched the room gathering up provisions from Heimlich’s fallen companions and Wulfgar discovered an immaculate dagger tucked away in another part of the great room. 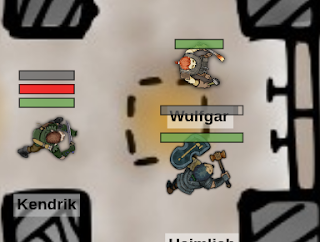 While Kendrik considered skinning the wolves, Wulfgar and Heimlich turned their attention to the only other door in the room. A pair of great stone doors stood opposite the doors that Kendrik and Wulfgar had entered through. Wulfgar and Heimlich began searching for possible defenses around the door and discovered a large pressure plate and several openings in the walls to either side of the doors. Wulfgar tested the pressure plate with his torch and quickly realized that that had been a good decision as clicking was heard from the holes unleashing a large cloud of dust and ash. As the cloud settled, Wulfgar found several darts stuck in his torch!

Realizing the full extent of the trap, Wulfgar and Heimlich covered the holes with their shields as Kendrik attempted to open the doors. Thankfully the trap didn’t activate again, and the others were able to try their hands at opening the doors and failing as well. Then Heimlich noticed a latch hidden in the stonework of the doors and was able to open them as Kendrik tried once more to open them—this time with ease.

The Statue Room
With the doors opened the group stepped through and found two great statues—a female statue of white stone and a male statue of black—both with large grey stone bowls. Wulfgar investigating the white bowl, feeling an energy within.

Heimlich, testing a hunch, poured out his wineskin’s contents into the black statue’s bowl. The red wine began to boil and turned black.

Wulfgar seeing the results, decided to test the white bowl. Emptying his waterskin into the bowl resulted in a similar result with the water boiling, but it turned into a milky liquid. Wulfgar than took a chance and dipped his finger in and then putting his finger into his mouth. The sensation was pleasant, and he decided to go for it. He dipped his cup into the liquid and drank it. 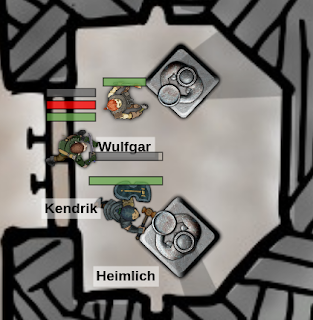 The wounds from the previous fight immediately stitched themselves closed and he was returned to full health with a slight feeling of additional strength warming his body. He then invited Kendrik to partake and receive the same benefits.

Meanwhile, Heimlich decided against drinking from the black liquid and instead lowered a bullet on his sling into the liquid, and quickly discovered he had made the right choice as the sling sizzled and dissolved leaving him with two pieces of leather. He then drank some of the white liquid as well, and was similarly blessed with full health and the feeling of added strength.

Soon after Heimlich’s drink, the liquid in both bowls slowly disappeared into the stone of the bowl, but Wulfgar was able to retrieve one more gulp of liquid before it disappeared.

Then Heimlich had a rather morbid thought, but it was imaginative. He gathered blood from the wolves and poured it into the white statue’s bowl. He was pleasantly surprised to see the blood bubble and turn into the same milky liquid. Submerging his wineskin, he was able to retrieve 11 ounces of the magical elixir before it once again was absorbed into the bowl.

The party then returned to the campsite with their new party member, Heimlich. 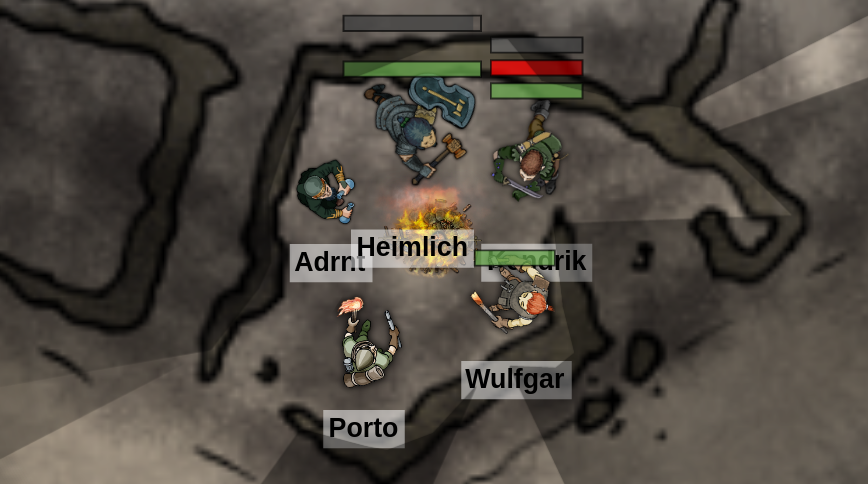 Gamemaster notes:
I am running Servants of the Cinder Queen using a map of my own making (Patrons will see it early next month!) in Roll20. I have not used Roll20 extensively in almost a year and they have really stepped up their game since then. I was a Kickstarter backer way back in the day so I get to play around with dynamic lighting (I will be upgrading to a Pro account after the next Patreon payout) and this was my first real experience with it. I also used the ambient music to play some cavern sounds in the background. I thought both worked great, and though they may not have added a huge deal to the game I do think they are Good Things to have and use.

The dynamic lighting I really liked. My first thought was that it was going to be a pain to set up but once I figured it out, maybe ten minutes and watched a video (https://youtu.be/YXciH7gR1Ec but omg he drones on and on, watching it with extensive fast forwarding). His points on keeping the doors as separate items from the walls was keen and worked perfectly. As players open doors I could easily drop to the dynamic lighting layer, click and remove or slide doors out of the way. Worked perfect. https://wiki.roll20.net/Dynamic_Lighting_Examples is also a good page to read about Dynamic Lighting in Roll20.

I thought the game went smoothly and we progressed quickly through two encounters with the 'wolves' (Devil Dogs)and into the Statue Room. The Statue Room is not in the published adventure but I wanted to offer the players a way to heal up a little as I thought the dogs would tear them up pretty badly. I ended up begin correct as Kendrik was reduced to a single hit point during the encounter. The adventure is written in a more abstract way with randomly generated tunnels and encounters but I wanted to have a map (yo, I like maps, what can I say?) and a little more thought out that completely fly-by-the-seat-of-my-pants.