THE CAST O' CHARACTERS:CURRENT ROSTERVance - Yozzat, a dwarfJoe - Olwen Door-Hinge-Bane, a human rangerTim - Raymondo M., human thiefSteve - Dosta Grimm, a fucking elfShane - Grey the archer, fighter stylized as a archer / Gordo the thiefBryan - Brad, human fighter (out due to real life injury!)
SESSION 10
This one will be short. First, our game night was the day Google experienced one of its rare "shit stops working" days and everyone had issues. One could not log into Gmail to access Hangouts, Meet would not allow them to connect, ugh. I thought about suffering and trying to use Zoom but I would rather sacrifice my left nut. Second, well, not much happened.
Once we got everyone connected the group seemed quite skittish and chicken tonight. I had a special treat for them tonight, a unique creature I am sure none of them have ever seen: 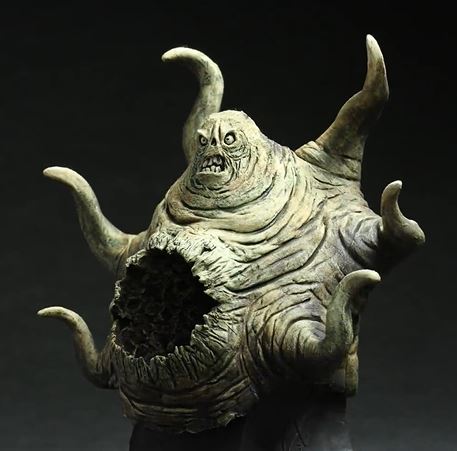 Dug Stanat's Feeding Lord Festilaux's Fistule
It rose out of the green pool and studied the group. They immediately backed up and staked the door shut. I am glad I did not too much thought into this encounter....
Next they went back to the wailing wall and opened the false wall. Behind it was a large room with two altars and a deep moaning coming from a connecting room. Soon, two zombies - the likes (again) that they had never seen. While they were dark and ashen in color, a deep fire burned inside them, leaking out of cracks in the 'flesh'. 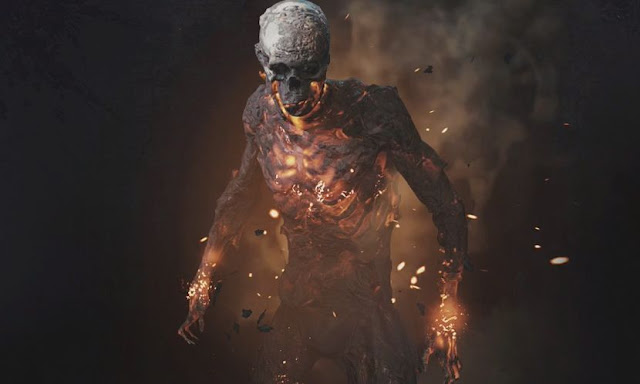 An arrow was fired at one, it stuck in its chest and being wood, immediately burst into flame. Then a spear was thrust through one's chest, it too burst into flame. Some Holy Water was tossed at them, the attack missed but covered the floor, the 'creatures' avoided this so another flask was tossed on one. It struck and seemed to put out some of the flames inside it, but then it roared back and the flames flared up as if in anger. Our troupe deemed this too odd, and backed out of the room, again staking the door.
Next was a flooded room. They had passed over this room at least four times, only returning when no other clear path seemed survivable. Opening this door revealed a tall altar with a tall curtain along the wall behind it. Rather than step in the knee deep water, they began using a grappling hook and rope to pull the curtain down, revealing three skeletons again the back wall along with two statues of a fancy knight in armor (which matched the mosaics on the side walls.  This room proved to be quite scary and the party refused to enter it as well.
We stopped there for the evening.
DM's Thoughts: I guess looking back, this Barrow is pretty tough, with strange and new monsters that no one has ever seen before. It is kind of funny because all of old grogs all say "Running away is sometimes the smartest option" yet when it happens in a game it feels empty and hollow. After listening to Tim's podcast (click here to give it a listen) I realized that I may need to tone it down a little. I have been pretty hard on these guys. They are first level, I have killed a PC or NPC in every session except two. I will have to think upon this over a couple of hard ciders.

I will say, I wondered why they keep forgetting the many magic items I have given them. Oh well, lead a horse to water and all that....
THE GRAVEYARD
Misstep, wayward magic-user
Able Artone, human fighter - (Christian)
Macros - long-living magic-user (Joe)
Brother Adelmo - cleric (Tim)
Vox - human barbarian (Bryan)
Janos - halfling (Jason)
Harold Flynn - halfling badass (Vance)
Shelzabaz the Magnificent - magic-user (Steve)
Caradoc - an awesome halfling unjustly murdered by a callous and vile DM (Vance)
HIRED HELP
Dimgert Flathammer of the Kragagor clan, alas dear friend, ye are no more
Bint (kobold) who they oddly forgot about this adventure!!
Usee (kobol) likewise forgotten
About ten kobolds who died to avenge their people!
Garth the human (dead)
Izzy the elf (dead)
Too many retainers to count and I cannot recall their names