THE CAST O' CHARACTERS:
CURRENT ROSTER
Vance - Yozzat, a dwarf
Joe - Olwen Door-Hinge-Bane, a human ranger
Tim - Raymondo M., human thief
Steve - Dosta Grimm, a fucking elf
Shane - Grey the archer, fighter stylized as a archer / Gordo the thief
Bryan - Brad, human fighter (out due to real life injury!)
SESSION 9
Wow, not even sure where to start with this one. I knew it could be deadly, I built it that way but if caution entered their mind, perhaps my list of PCs and NPCs killed would be less. But here we are.
We entered the barrow, they quickly discovered two statues with glowing gems behind them, Grey opted to use the statue to climb up and read the gem for removal. As he did, he used....and I am quoting here...."his ballsack to step up and reach the gem." Needless to say, the penis broke off and this set the tone for the rest of the session.
Penis jokes were spread wide and far...

Next the discovered the room to the north, flooded and opted to not open the door, instead exploring the crack behind the last statue. And that was their mistake.... 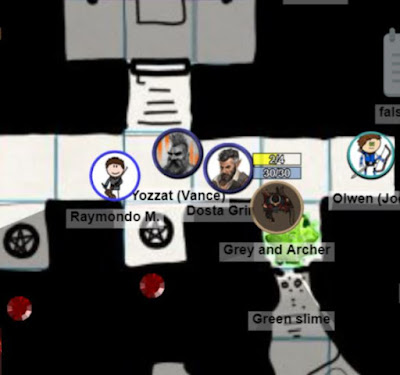 Grey was immediately covered by a Green Slime. I gave him the option to step out of the way (he said "I look up" just as it dropped on him) but he instead stood his ground and while he did damage to it, he was also covered, and trapped, beneath the slime. Dosta threw a flask of oil on it while Olwen lit a torch and subsequently set it aflame. A few moments later, and a few HP less, they managed to subdue the slime, sending caustic thick smoke in the dungeon. They quickly decided to push forward, locating the crack and heading deeper into what appeared to be a natural cavern. A cavern filled with fucking frogs!
Now, the smoke was blocking everyone's vision, and the crack was tight, but our 'heroes' pushed onward and were ambushed by luckily only one full grown frog and her two babies. Attacks began in earnest but the smoke and tight passage caused havoc on any attempt at tactics and Grey bravely stepped forward...into the pool of water....hoping to get a clear attack on the momfrog.
He felt a sting of pain and looked down to see the two babies munching on his legs, one with a critical. He fell beneath the water, a dark water grave. Fear began to set in (I think) and the party began to (smartly) retreat back into the barrow, sealing the crack by knocking over the statue.
They then turned back and headed up the hall to the north, lifted a portcullis, and discovered another statue. We let Shane spawn his third character for this campaign, Gordo the thief, and he opted to climb this statue as well, for the gem. Yozzat was able to locate the release that allowed the statue to slide forward, in this case, grabbing and pulling the statues ballsack. ;-) When it slid forward it revealed a hole with a metal-rung ladder leading down into darkness below.
Opting to not go deeper and to the next level of the dungeon (where undoubtedly the GM has 2HD creatures to kill them!), the group opted to continue further into the tomb. Another statue and they came upon another door. Due diligence provide just a mild smell and no sound from beyond so they opened the door...
And were immediately smacked in the face with the most horrible, rotting smell emanating from a large sunken pool of vomit-green liquid in the middle of the room. Most of the party reacted by vomiting too.

We stopped there for the night. Tonight was the largest group we have had together and it was a hilarious, raunchy, good time. Thanks guys, I needed that.