renamed to reflect the current situation!

SESSION, THE EIGHTH
Joined now by two more players, Steve and Shane, the party stood over the barrow mound entrance. The entrance was merely a dirt-covered depression on the side of the mound and would require some hard work with shovels and pickaxes to expose what likely lie beneath: a stone block!

Only, our group headed out to the Midgemarsh sans shovels and pickaxes! What in the flaming hells?! Ok, this was an oversight, I will admit, on both our sides. We use OSE and OSE is mysteriously lacking any sort of mining or digging items on the provided equipment lists, so they did not see it in an equipment list and I failed to mention it prior to us heading out to the mound. Luckily, their friendly guide Dimgert IS a miner and luckily had a shovel and pickaxe in his gear.

For future reference I submit an expanded equipment list (prices listed are per Fudwick's Emporium in Kalynn) (side note, Blogger sucks balls for tables):

Anyhoo, a few party members joined Dimgert, while a couple went wandering, 'on watch' or something and did not help dig out the entrance. This is where things began to go astray. It was going to take a while to dig out the slab covering the entrance which gave me the perfect opportunity to sneak my random encounter giant frog closer to the group. This would allow it to use the frog's special leaping ability. Two PCs caught on that something was stalking them, but because they were not helping to dig, this actually ended up putting the party in MORE danger. They managed to remove all the dirt and could now begin working on sliding or lifting the stone slab to access the barrow below the mound.
The frogs were able to sneak up while the group was digging and launch a surprise attack on poor Dimgert, swallowing him whole in the process. One frog attacked the group at the mound while another attacked Olwen. The mage Misstep ran forward and attacked with this staff, and was subsequently also swallowed. Luck favored the party though and they were able to subdue the large creatures, pull out Misstep and retrieve most of his items undamaged. 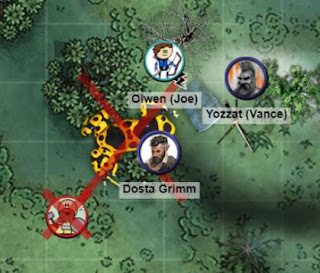 Again, the party decided to waste more time, cutting open the frog, searching its innards and collecting up the meager treasures inside. Suddenly a group do f six Lizardmen appeared off in the distance, jogging quickly towards their position. MOST of the group began frantically to slide the door, just 6" at a time to make the opening wide enough to allow the group inside the barrow. At the last moment the group was able to dive through the three foot wide opening and into the darkness below. They tumbled down a flight or two of stairs and ended up laying in a flat hall with a terrifying skull serving as a gate to the tomb.
A quick aside... the party leapt into the barrow and only after being inside at the bottom of the stairs did anyone remember they had left the shovel and pickax.
THOUGHTS ON OSE/BARROWMAZE
So far I think the system is working quite well. We saw a little more concern this session with movement being limited but overall this session was riddled with players not working together imo. I think some of the delay could be caused by my own DMing style. I tend to be pretty easy going and I have decided to take a step back and enforce some rules and be a little more strict in some areas (such as movement and encumbrance).
I have not in the past really focusing on random encounters too often, in fact I think we only had a single encounter on all of our trips back and forth to the gatehouse. I checked each time but the players had been very fortunate. Perhaps the players thought I was not use the random encounters much. I am overall trying to showcase the fact that the Midgemarsh is one dangerous freaking place. We have had THREE random encounters spread over two sessions just getting to the Barrowmound!
Next session will be inside the mound and likely end in more death. This one is going to be tough, and the players will have to think things through and be smart...