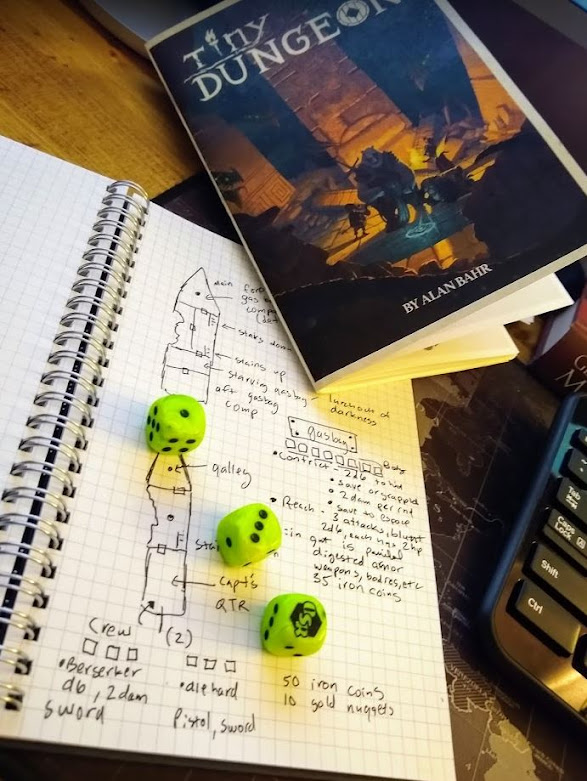 So Christian from Destination Unknown and I have been somewhat excited about this silly little game called Tiny Dungeons and have pretty much been talking about it off and on since last weekend. Tuesday night while talking he said basically "I am on lockdown in LA, life sucks, save me and let's play something." So Wednesday during the day my mind was just swimming with ideas and I approached him and asked if he wanted to get together for an hour or so, give the system a run through, see if we liked it in play or not, he agreed.

I had a very, very rough idea based on a setting write up in the back of the rulebook called Skies over Rocét, a sort of airships over poison-mist covered lands. I really didnt work on it until my drive home, originally planning to do just a simple fight or something to move through the ropes of combat or something. Then, I got stuck in traffic and the mind went cra-cra. What follows are the text messages I sent him while stuck in traffic (rambly, train of thought voice-to-text follows, you were warned):

So what I'm thinking for a one shot is a world like any other D&D setting, move forward 500 years and suddenly the low altitudes all get covered in mist. Some societies were able to move to high altitude locations and set up cities and develop trade routes using magical or maybe non-magical airships. Society has reestablished itself and now you have small pockets of humanity scattered on the higher regions of lands, mountaintops hilltops, etc but the myths are deadly not because of a gas or something like that but because of what lives in the mist, much like the movie The Mist.

Now ships move from location to location and trade but there are also pirates that haunt the air and look for ships to capture and steal. In addition there are treasure troves aplenty hidden in the mist below that only the bravest and most foolhardy venture into the mist or in the locations when the mist manages to part and expose locations

I think your character would be a young member of a very small pirate crew who are looking to make a name for themselves. Perhaps they have discovered the location of an interesting structure that they could explore for treasure. Their Mistseer has calculated that the mist should part for a brief amount of time tomorrow, the crew will head that direction and hopefully explore that area for treasure before the mist rolls in

Tech is about 1700s, pirates, flintlock, cannon. Magic exists but somewhat rare (feared). Airships are built around massive creatures with airbags, a byproduct of their digestion is that they create extreme lighter than air gases which enter these pockets and the pilots use to control altitude.

So if you went below deck in a ship you might pass something that looks like a tentacle that runs to different portions of the ship with airbags spaced evenly around it to keep the ship level.

Airbag creatures have a mental capacity similar to that of a cow, so they are bred, fed, and maintained merely as a sort of service vehicle to enable aircraft to fly. Different size creatures will power different size craft from something the size of a horse to something as large as an elephant

You live in New Angeles, when the mist rolled in, a few rich folks in LA went up in Yosemite and established a small community there. A short while later the first Gasus Baggus appeared and enabled them to roam, which they used to collect stuff they needed to survive. Luckily enough 'natural way of living' and hippy people had joined them and they survived. After a couple of years a ship arrived offering to sell things from the old world. Later these folks, rougher and meaner but far outnumbered, set up at the edge of town. Locals called them pirates but they framed themselves as explorers of the Ruined Below. Fast forward 50 years and the two have melded well enough, like two different neighborhoods and carry on an uneasy existence. The explorers go out to find useful bits of tech, things not available on the top of El Capitan, and trade for food, medicine, etc. A merchant class has sprung up and they trade with other remote communities. Sometimes the explorers provide security for the merchants.

I got home, fed and walked the dogs, went to the local Chik-fil-A to pick up a sammich and the most excellent waffle fries for dinner. While eating I hammered this out: 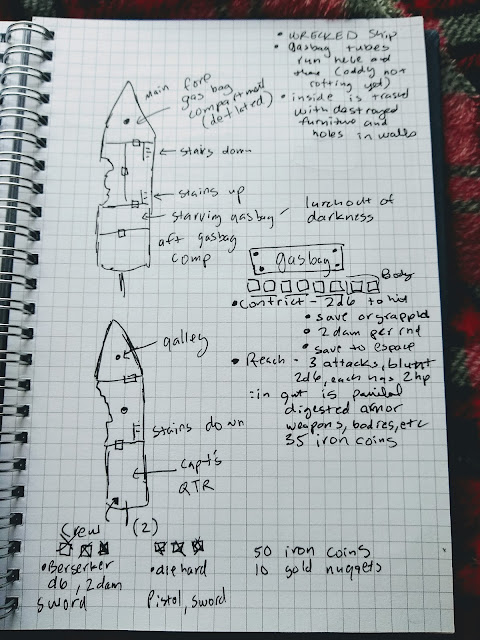 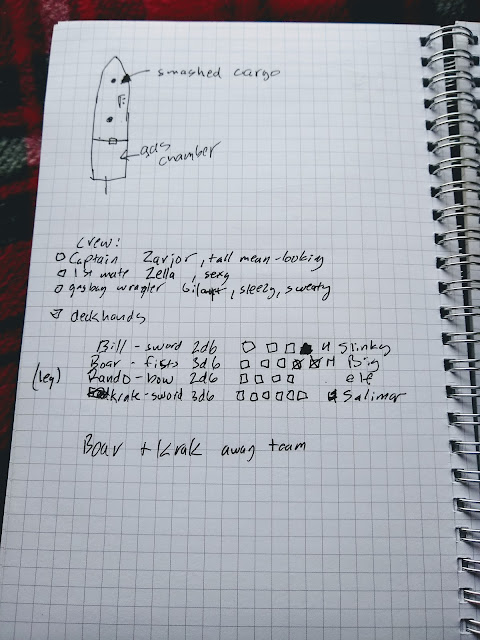 DM note: Making up the crew on the fly was extremely easy. I had the entire crew of seven people written up in under five minutes. You essentially need a name, a trait or two (leave one slot open for you to add one on the fly if you want, good for emergent play Jason!), and maybe a weapon. During play I ended up adding that Krak had a large backpack and on a successful Save Test, any reasonable item they might need could be pulled out of the pack (rope, wrench, grappling hook, etc)

The trip out to the site was uneventful and we soon came upon the site of the wreckage. The large craft had settled on the edge of a cliff over looking a river in a valley. The surrounding area was mostly rolling hills with just a few bits of shrubbery, providing just a few spots where someone could hide in an ambush. We circled the wreckage and Christian was satisfied it was safe, the captain slowed over the wreckage and a rope ladder was dropped to the deck below.

We had planned originally for just an hour or so and ended up running for over two hours. With my slim notes above, I was able to flesh out and smoothly run the game. Combats were smooth and quick and the system mechanics allowed for quick and decisive resolution of checks and tests. We easily managed combats with the PC, three NPCs, and multiple enemies, to include a situation with the boss monster in the boat...the giant and starving gasbag. Christian thought outside the box and ended up feeding the two bad guys TO the starving gasbag, and quickly reinflating the gasbag's airsacs (which provide the lighter than air gases which provide buoyancy for the airship). It was quite ingenious of him and he went from returning to the Captain's airship with a handful of items to returning  WITH AND ENTIRE AIRSHIP AND ALL ITS CARGO!

Notes on Tiny Dungeons: Thus far I am really enjoying this system. It reminds me of a system like Fate Accelerated or Risus, both systems I liked that I eventually ended up leaving on the shelf because of inherent issues within the system that imo ruins them. FAE has a pretty wide swing on the power level of the Approaches, ime this causes drastic power level differences for the players (and bad guys). This causes chaotic fluctuations in the games. Risus, well, long story here, but fuck Risus.

Anyway, so far in the one game I have ran and one that I played (solo) the Tiny system is providing a more constant and reliable resolution system than FAE or Risus. I am currently planning two more Tiny X sessions with different folks to test out the system more.