HIRED HELP
Bint (kobold)
Usee (kobol)
About ten kobolds who died to avenge their people!
Garth the human (dead)
Izzy the elf (dead)
Too many retainers to count and I cannot recall their names

This is sort of a recap, get you up to speed, sort of post. My general thoughts on how things are going, how I run my games in Roll20, etc. A bit of a ramble, but perhaps others might find it useful to some degree.

ON USING GoCC:
I have been running GoCC since early July, a full six sessions now (which is actually a pretty good run for me) using OSE. I tend to run a rather loose game so I am not a dead-stickler to rules....more of a 'what works in the moment' rather than stick to the rules raw method. I have pretty much stuck to the adventure as written, only adding slightly more treasure, a few traps, and adding some magic items to a BigBoss. I think this is actually one of the strengths of this adventure. It is pretty lightly written, affording a DM enough information that you could run as-is, but this also allows a DM to add bits here and there without effecting the main adventure but giving it enough to 'make it their own'.

I specifically chose this product to start my game for two main reasons:
1) It could be ran as-is, with only a quick read through. I am busy, have serious attention difficulties. I thought by using this lightly-written adventure I might be able to get past this. I have a notorious and dreaded history of starting campaigns and then killing them off when I get bored or the-next-big-thing catches my eye. I did not want to invest, or have my players invest, tons of time in a new campaign only to screw it up and kill it.
2) The reasons stated above about the adventure being just enough to run, but with enough space to add personal touches.

I think this adventure is 'deadly', and could actually be more deadly if I used everything in it. For example, my players have been very luckily with only one encounter between the village and the gatehouse (a 3-4 hour trip on foot). (more on this below)

With GoCC, you get quite a large play area. There is a regional area with five, FIVE, sub-areas that are all ripe with possibilities.The PDF says that it is a "mere 3 hour march to the gatehouse" from the village. Calculating this out with the average hiking speed (according to Google) of 2mph, that means the gatehouse and village site on oppose sides of a typical 6 mile hex. Plenty of space to drop in whatever your hearts desire.

/ matt's tangent on wilderness exploration
I know I have made this argument before, about how large a Six mile hex really is and how much land it encompasses, but I enjoy doing this, so here goes. I recently went hiking and whitewater rafting in the Blue Ridge Mountains in Georgia (yes, during COVID, sucks to be you folks that live in the big cities on the east and west coast). We went whitewater rafting just below the Olympics rapids used for the '96 Olympics. We put in at the white dot and got out at the blue dot, the captain of our boat said it was about a 3 mile route and it took us about 3 hours to cover as we floating down a rapidly moving river. clickie to enbiggie
Here is another way to look at just how much area a six mile hex encompasses. Here is a photo I took on the trip from a scenic overlook high above Lake Parksville Lake. Notice the boat speeding away down there. If you think it would not take you literally an entire day to search an area of two square miles for a small dungeon entrance, I would posit that you have never hiked a day in your life out in the true wilderness. 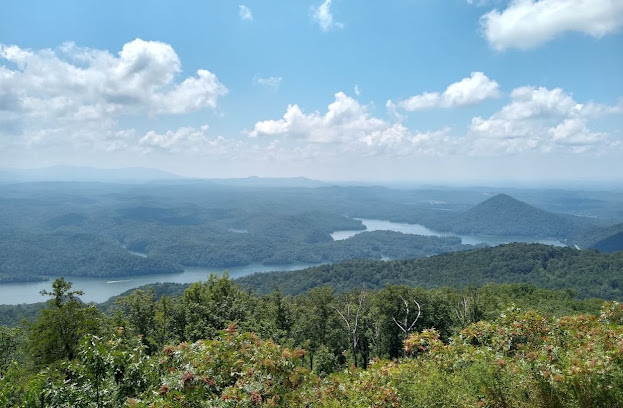 clickie to enbiggie
And here is the six mile hex superimposed with an angle showing approximate viewpoint from the photo above. You can see the length of the lake is roughly two miles. Compare the area of the lakeshore inside those two lines with the above photo. 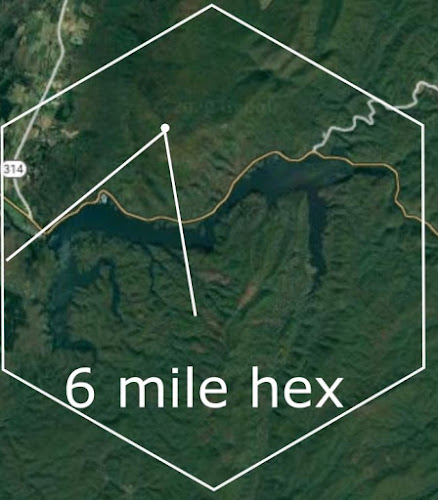 USING THE VILLAGE:
As I said in my previous post I have stuck to the early D&D mantra of "Keep them out of the city" (from B2 In Search of the Unknown) and strictly made the village of Kalynn a place to recoup, sell, purchase, pick up retainers, and then scoot them out of town quickly. However, I have sort of felt the hole left by little 'role-playing' this causes and am likely going to expand the interactions in the villagers because I have some ideas for expanding the play area of the adventure. The areas around the village, along the various routes to the gatehouse are chock full of opportunities for more adventure!

To accomplish this I am moving from David's map to my own. Here is his map. Adequate, useful, and great...if a bit square, next to my re-purposed map. A few more locations, and frankly, I am partial to my own work. 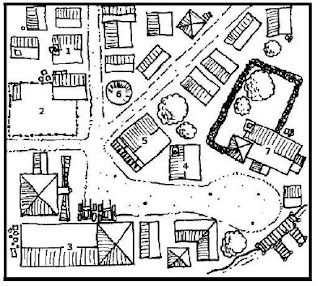 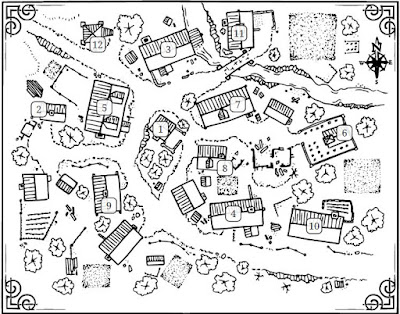 The adventure is written for White Box but really this has not impacted the game at all. I do a little prep in Roll20, basically adding in tokens and copying over a few stats from the OSE SRD, just what I need to run the game. A quick note on the data I enter here. While those colored circles probably line up with something from a character sheet, as a DM I find that useless. So I set them up for quick in-play use. Red makes me think of blood, so I put Hit Points in there. Blue, for whatever reason (maybe blue is good guys in the Army and good guys bring armor to the battle...?) reminds me of armor, so I put the Armor Class in the blue circle. Green is left over, so I put the main combat damage in there. Having these number readily available with a single click has allowed me to speed up our combat. 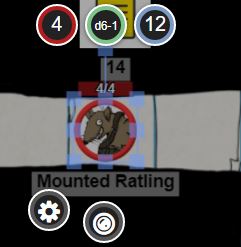 In the expanded token settings, I usually copy over the entry from the SRD like below. While this is not usually necessary, this takes out any guessing or pausing for me to look up a creature's stats during the game. I find this also comes in handy because I tend to prep in advance, sometimes FAR in advance. Our current exploration of the second level of the dungeon in GoCC I put together one Sunday afternoon back in early July. So for my old, feeble mind to remember that these little fuckers suffer an additional +1 of damage from silver weapons would totally have been forgotten (never came into play actually). For BigBoss battles, I find this set up invaluable as I can list spells, special abilities, and magic items here. I will often also drop any treasure into this GM Notes section. 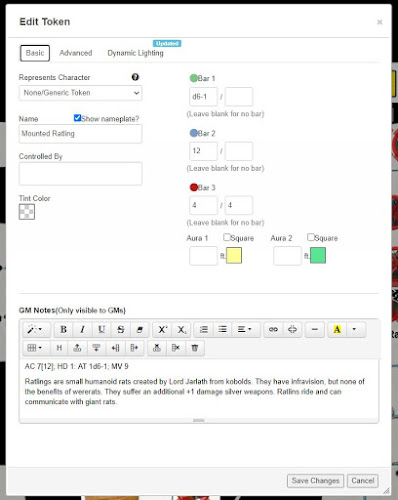 Another tip: If you are running something that has numerous monsters, stat them up then simply copy them. This way you never have to enter the data on another token. I do often go in and change up stats a little here and there just for variety. Now though, I realize my players probably never even notice that! Ha! Total waste of my time!

DEADLINESS:
So this game has turned out exceptionally deadly. In a marked difference to most of my previous games, where -- don't tell my players this, I tended to take it easy on the and flub dice rolls occasionally so the game was not deadly -- with this game I switched to rolling in-game in Roll20. I rolled real dice off-screen and if I rolled a 6 on damage, I reduced it to 4 or something so PCs were not dying around every corner. Now, I stick to rolling in Roll20 with results visible to all. So, this campaign I have murdered a PC every single session we have played.

In my defense, and as the saying goes, "DMs don't kill PCs, players kill PCs through their choices". They made some silly choices. Why is that mage on the front row? You stood your ground as a ratling mounted on a giant  rat charged you (together they have a HD of four)? Tossing burning flasks of oil in close company?

CURRENT STATUS:
We have been going strong for the last two months now with six (we think) sessions. We have had to miss a few session here and there but I have mostly had a strong, stable group of three players with an occasional one or two extra join us. I went into this with the mentality of "If two show up, I will run" because many of my campaigns in the last three or so years have died partially due to lack of player interest (probably due to my own lack of interest) which caused them to not be dedicated and show up to the game.

The current group of usual players seem to be enjoying it, as am I, and I hope we will continue for the foreseeable future.

Wow, that was a bit rambly, but maybe some will find it interesting.