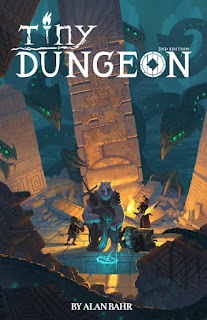 My friend Christian was looking at some systems yesterday and we got to talking about Tiny Dungeons, a system I have looked at previously but deemed 'too lite' for my gaming group. I had additional thoughts about how lite it was and if it would be good for long-term play.

I grabbed the book, a copy of Four Against the Darkness, some paper and dice and went to town....er, to the dungeon! First up, I wanted to make a character to see how the process went. Amazingly simple. I grabbed the Halfling Heritage from the Tiny Dungeon TinyZine Compendium 2019 and put together my usual halfling named Snikle Wiffleberry because I can. ;-)

Then I grabbed one of the characters included included in the TD Quickstart Characters, picking The Retired Blacksmith War Veteran, I can totally see a grumbley old dwarf, penniless because he drinks away all his money to make the horrors of war fade away into nothingness. After all, Snikle is not stupid, if he was going plundering he would probably grab a strong veteran looking for some loot to take as a partner on an expedition.

So I had my two characters, Snikle the halfling and Grond the war vet: 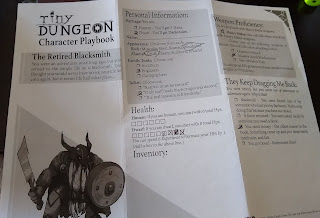 Then I needed something to explore. I decided to go with Four Against the Darkness because it has a very simple, but effective, dungeon generator that works really great for short, quick, little things like this. A quick side note - I downloaded the Tiny Dungeons Solo Rules but I do not recommend them. The writing is subpar and confusing. I ended up using my so1um rules a few times to answer questions when I came upon the need.

First up, the starting chamber (mapping starts at the bottom of the page image below). Of course I got the one with three doors.... Anyway, we went to the far right and immediately bumped into two skeletons. I used simple initiative, each side rolled a d6, highest went first. The skelies won initiative, both hit Grond and Snikle for one attack. Grond killed his skelie and Snikle killed his, but then...

Holy shit! The Rise Again trait is kick ass!  The damn things rose from the dead again! After a skelies is hit, you make what is called a Save Test, roll 2d6 and if you get a 5 or 6, they rise back up! We ended up killing them numerous times before they finally succumbed and no longer rose from the dead.. That is a mean trait!

I made one mistake here, no doubt because of the newness of the rules. I forgot that ALL things get two actions in combat. Two moves, two attacks, or one of each. While I had the characters strike twice, I only had the skelies attack once.

Going through the door, we discovered an empty room (yeah random rolls!) and then a locked door (via my so1um rules). Grond used his Massive Anvil Hammer to bash the door down (I used a normal attack roll, gave the door two HP) and they discovered a healing fountain! Each healed their wounds before continuing.

A few random rooms of halls and emptiness, we encountered a pack of Goblin Swarmlings, these were easily dispatched by our team (could have been far worse with a 2d6 encountered and I only rolled a 2 and a 1). Following their deaths, we discovered a gem worth 20gp. Score! Snikle is gonna use it to wow that elf babe back in town.

Entering the next room, the shit got real. Fast. A medusa surprised the team, immediately attacking with her Stonegaze trait. I made this on the fly. FAD said we encountered a Medusa with 4hp and Stonegaze ability (the FAD rules were not compatible with TD, so I decided she could use it two per turn and when a successful attack was made, meaning she locked eyes, the character had to make a Save Test or be turned to stone. If she remained alive after three turns of turning someone to stone, it became permanent. Back and forth we went, different sides each winning initiative and the pair somehow managing to make their Save Tests. Grond and Snik slowly wore her down until we got her to 1 HP left and the halfling finally failed his Save Test, instantly turning to stone before Grond's eyes! She had Grond down to 4 HP from his full 8 and she only had 1 left. Grond knew he had to cut her down for his friend to be restored so he doubled his efforts. Winning initiative, he was able to cut that bitch's snakedreads off and then remove her head. Snik slowly returned to the living.

After collecting their treasure, jewelry worth 150gp (surely enough to sparkle that elf maiden's eyes) and a Wand of Sleep, the pair quickly skedaddled out of this tomb and headed for the safety of a pub, a tall ale, and a thin elf maiden. 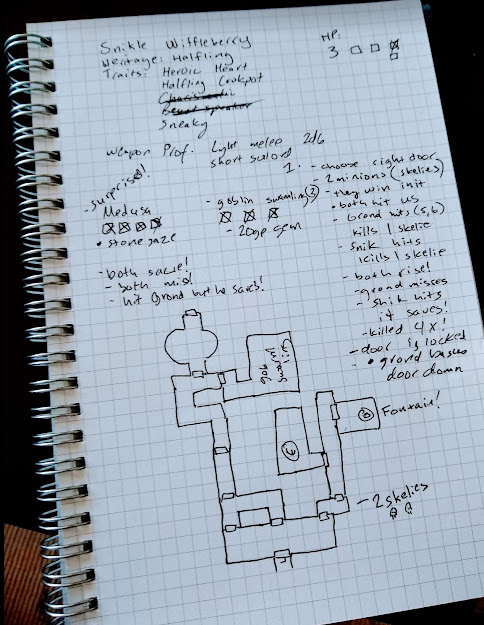 Thoughts on TD:
I LOVED the simplicity of the system. I easily made up the medusa's stat s on the fly and could see myself doing this with minimal prep for a game, getting a game ready to run in very little time. I also liked the versatility of the system, I think you could run nearly any genre with ease and almost no work using the TD rules. Star Wars? No problem. Fantasy? No problem. Cthulhu? No problem. Pulp heroes? No problem. I can see where some people have said the game lacks the ability for depth or advancement, but I think you could use this for a solid 8-10 adventures and still have a great time. I can see where the a few traits are so powerful that they stand the chance of upending a game, but that is what a good DM is for.

Anyhoo, I would recommend the Tiny Dungeons rule set, and I cannot wait to get in a game or run some sessions for others!